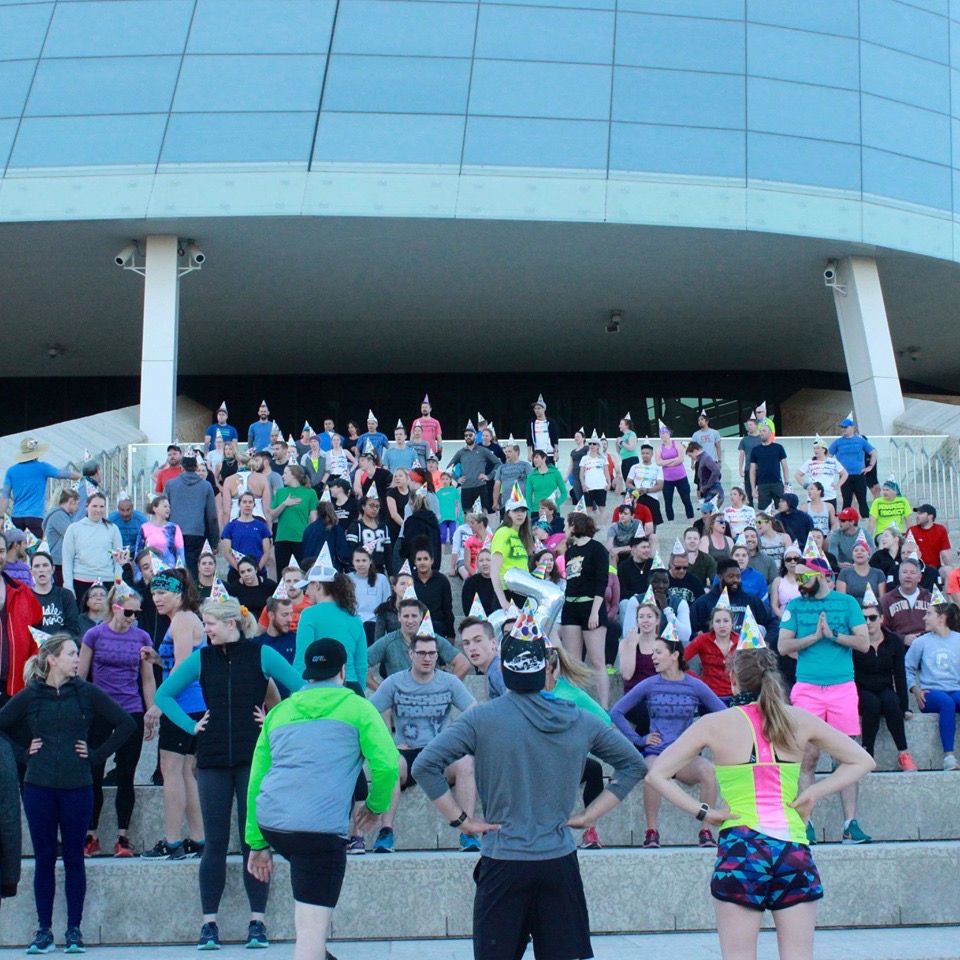 We filled those stairs in front of the CMHR and it may not have been our biggest turnout for a birthday, but it was definitely one of the hardest workouts. There were a heck of a lot of sweaty and smiling faces by the end of it. We had a whole bunch of new faces out there this morning, largely thanks to lululemon bringing the hype with the speakers and a big group of lemons.

We carried those good vibes over into the evening and had a big group of NP’ers show up to Global Run Day, put on by Winnipeg Run Club and lululemon. A few hundred people threw down for a hard five k (ok, mostly it was a fun five k, but I felt like putting the hammer down so I tricked Nate into it). There were people from all of the different run communities in Winnipeg; Fun Run Crew 204, Manitoba Run Crew, Bridge Forks Running, November Project, Bad Ass Lady Gang, Winnipeg Run Club and I’m sure a few others that I’m missing.

It was a great day to emphasize that we are all one big fitness community working towards a common goal; building connections through free fitness. I encourage you to go try all of these groups at some point during the summer.

Next week is Yearbook Photo day. The theme is denim, and I am pumped to see all of the Canadian tuxedos that I know you all have in your closets. I’ll make sure the white balance on my camera is set properly this year. If you have any ideas for what would make a good backdrop for the pictures, shoot us a message, and we will see if we can tie it in to the workout.

It was fun having Rick back to help lead a workout. He was a little rusty with the yelling bit and he lost his voice by the end of the bounce and before the workout even started, but he brought the hype to the second station of the circuit. He said there was no music at his station, so he serenaded everyone with his angelic voice as they came in to choose a card and fire off some reps. Thanks Duha. Tom would have loved to be there as well, but he had to be at the hospital early yesterday morning.

On Friday, June 21st, Junel will take stigma to the trash once again. We will meet at Garbage Hill at 6:14am and run some miles with him as he fires off another 100+km’s that day. The event goes on all day, so if you can’t make the pop-up, make sure to get there at some point to get a run in with him. Junel is a true inspiration; he is humble, kind and caring.

And finally, the annual workout at the Investors Group Field will be July 17th. We are also in the process of choosing a game day for all of us to go to at a discounted rate, so stay tuned for that. The workout at the IG Field is always one of the highlights of the year. It would be nice if we had the option to workout at a stadium every week like some cities do, but we will make the most of getting in there once a summer and make sure you get maximum stairs in. For this first time it won’t be right before or right after the marathon, so that will be a bit nicer on the calves.

Let’s keep this birthday month going; bring the fire every week and reach out to people to hold them accountable to show up. They will thank you for it.