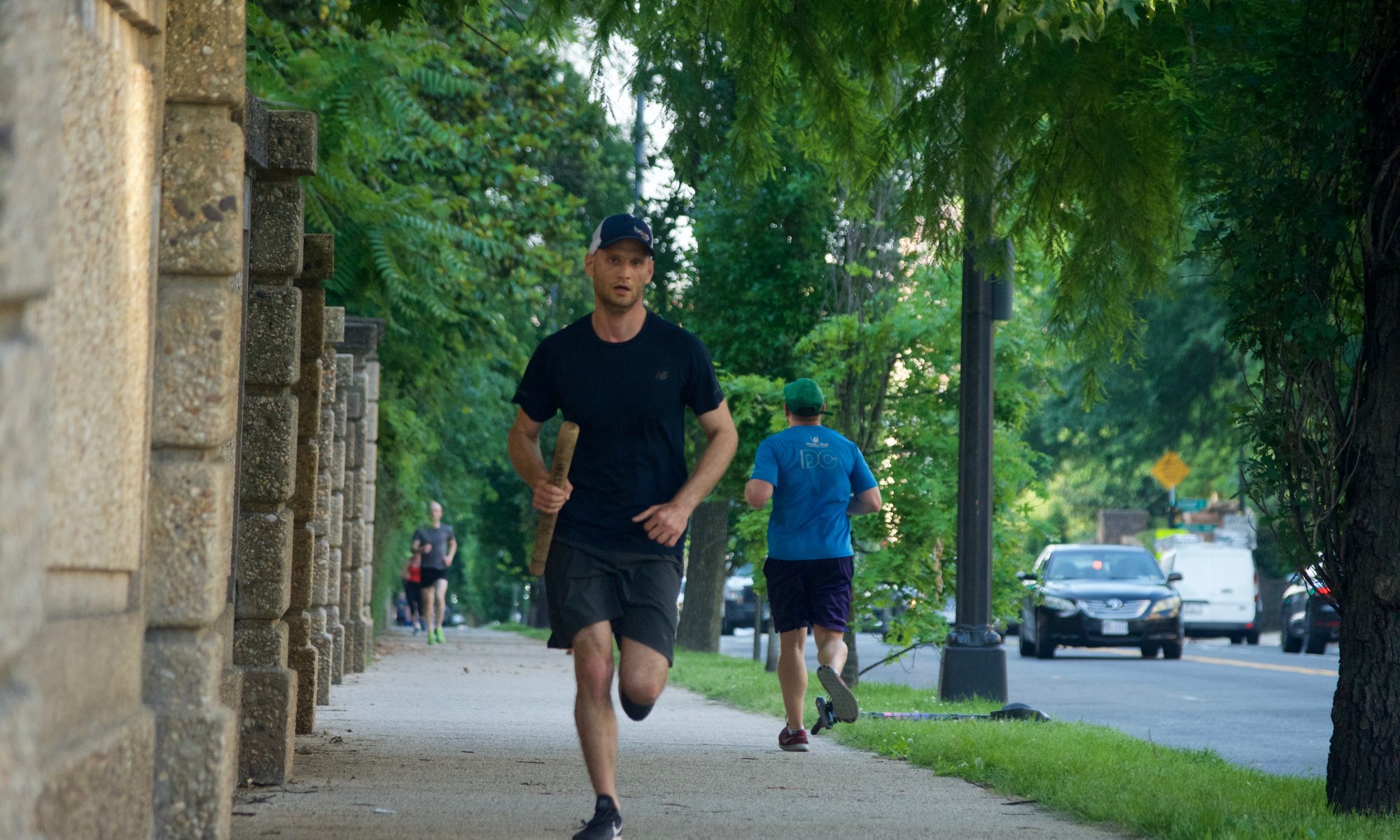 Last week, we couldn’t be more proud to present Jim Duncan with the Positivity Award. What stands out to us about Jim is his constant presence, his willingness to always put in the work and go as hard as he can every workout, his reliability (he’s NEVER been late), and his listening (you won’t find Jim asking for workout details after an explanation!), among other things. Meet Jim below, and of course come find him (and the award) at a workout MWF!

How, when and where were you introduced to November Project?
I recall reading an article, probably in Runner’s World, right after November Project took off back in 2014.  I was living in Dallas at the time and we didn’t have a tribe at that point.  But November Project just stuck in the back of my mind of a type of activity/group that I would find appealing. When I moved to DC last year I finally showed up.

What do you remember about your first workout or thinking at/after your first workout?
My first workout was a Friday workout in July 2018 right when the World Cup was kicking off.  I really dislike being late to things, so I remember showing up probably 15 mins before the workout.  There were already couple people milling around already when I got there.  I saw Maria and Steve planning out the workout and made it a point to introduce myself to them.  Like most people at NP, I have been to plenty of other workout groups, Crossfit, run clubs, etc… The thing that stuck with me at that first workout was how much fun people were having and how engaged everyone was with each other.  November Project was not a solo activity.  You had to interact with other people.   Just the general supportiveness amongst the group stuck with me.

What motivates you to keep you coming back?
Plenty.
One very simple thing, for me I use NP as a way to stay consistent with my running.  NP is always there MWF and even if you are injured there is a still a place for you. It should probably be no surprise that I enjoy the competitive aspect of NP as well.  PR day. The Sunrise 6K. Plank-a-Palooza.  All great.  But what I think sets NP apart is the community.  After you compete, and really you are only competing against yourself, everyone turns around and enthusiastically  supports those still competing.    Additionally, I always enjoy the Friday workouts because it is a just a great way to explore different parts of the city I haven’t been to before.

Describe for us your favorite November Project moment to date.
My first “weather proof” workout.  It was a Friday workout this past January out at the Pirate Ship playground.  Up until that point, i was probably a once to twice a week NP’er.  This was the first really cold day of winter.  This workout was on the other side of the Anacostia so it was certainly not convenient to get to.  But I made sure to verbal so I wouldn’t be tempted to back out when my alarm went off. It was cold, it was dark, and it was far. But the thing is that those conditions existed for everyone else who showed up.  By the time the workout started there were around 25 other NP’ers there.  And we all endured those conditions together, got a good workout in, and had fun. While I am sure most people in DC were sleeping and making it a point not to go outside, there was a group of us purposely outside, working out, and having a good time. There was an immense satisfaction in engaging in and enjoying an activity that others found too inconvenient and arduous. After that I started showing up pretty much to every workout.  No matter what the weather is, be adaptable and show up. There will be a community of people waiting for you.

At our recent Show & Tell event, you told a story about your cross country trip. Describe for us your favorite place from that trip?
Montana in general. If anyone reading this is looking for a recommendation on where to take a summer a vacation, I highly recommend Montana.  Glacier National Park and the Missoula area were terrific.  Great access to the outdoors with friendly and knowledgeable people.

On that trip you summited famous Half Dome in Yosemite. What was that like?
Just a condensed version of my talk from REI. This hike was at the end of my cross country trip, right before I moved to Colorado. I had seen most of the western United States that I intended to see. I had gone on many hikes but they were mostly about enjoying nature and taking in the outdoors. I had yet to do a hard physical effort on the trip. Yosemite was the last park I was going to visit and I saw that Half Dome was rated as one of the most difficult day hikes in the US. It ended up being about 20 miles roundtrip, eight hours & change to complete, 90+ degrees for most of the day, and about 5,000 feet of elevation gain. The most difficult section was the cables section by far though. Ask me about it at a workout and I’ll tell you more about it. At the end of the day that particular hike was one of the more difficult but emotionally satisfying endeavors I have undertaken.

Tell us about your first job?
The summer following 7th grade I was an assistant janitor at my middle school and shortly after I was a grocery sacker at the local grocery store. Typical entry level job stuff. Cleaning bathrooms, sweeping floors, and sacking groceries. Good times.

If you could have one superpower, what would it be?
I am happy with being me. I don’t need any additional powers.

If you could have any animal as a pet, what are you choosing?
I am actually looking into getting a Rhodesian Ridgeback sometime this year.