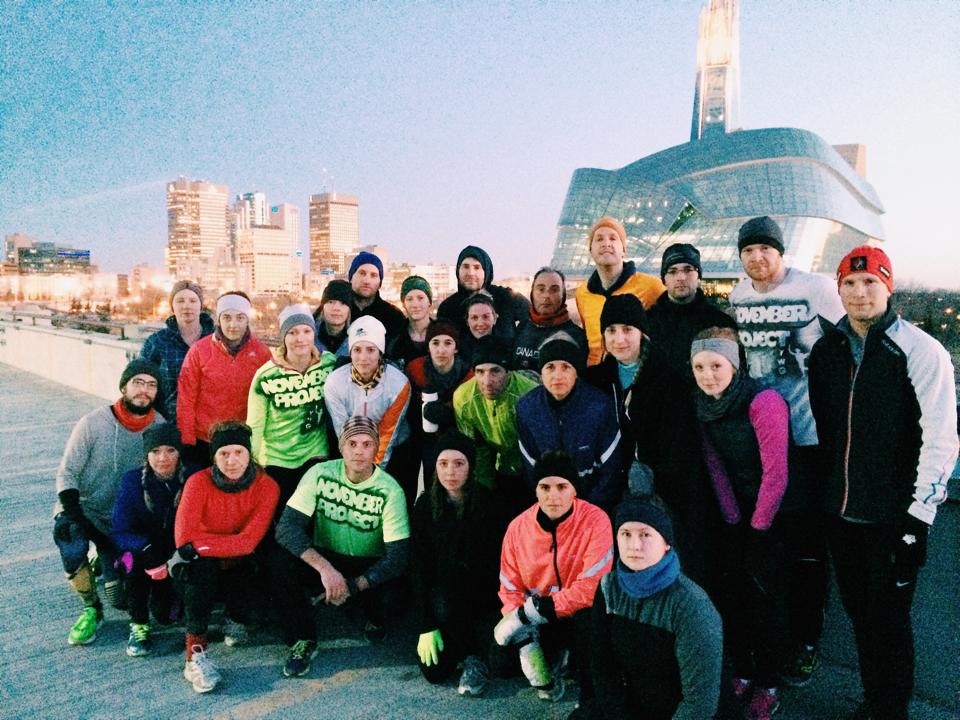 Hi! Katie and Dan here.  We had the great pleasure of leading this week’s #novemberprojectywg workout while our intrepid leaders, Tom and Rick, tore up the fresh powder in Big White, BC took an administrative day.  Needless to say, we knew that we had huge shoes to fill.  Tom and Rick have masterfully led our tribe over the last 9 months and along the way have built an incredible community of amazing and dedicated people.   A big part of our tribe’s success is due to Tom and Rick’s high energy and vibe. Big shoes to fill.  When they asked us to fill in for them this week, we were excited but a bit nervous.  With a little thoughtful planning and a wicked music playlist, however, we were confident that we were up for the task.

Here’s where the planning part got us into trouble.  I, Katie, had the (what-seemed-brilliant-at-the-time-but-in-hindsight-definitely-wasn’t) idea to place the Positivity Stick at the intended end location of our workout so that I didn’t have to haul it around with me the entire time.  We had chosen the end location to be the top level of a parking garage to best view the rising sun and we figured at that time of morning there would be no one around so we left the Positivity Stick and started our workout. Big mistake.

Everything went perfectly (and I mean perfectly, Tom and Rick 😉 ), until we got to the top of the parking garage and discovered that the Positivity Stick was nowhere to be found. After searching through a few unsavory garbage cans, we came to the sad reality that it was GONE.  (Katie: “inwardly, I was trying not to panic as visions of having to first confess to Tom and Rick and then to the greater NP community that we messed up such a sacrosanct tradition by losing the Positivity Stick a mere 3 weeks after having been honoured with it by Bojan!”) But we realized that we needed to remain POSITIVE and carry on!  So we grabbed the closest water bottle as a substitute and presented this week’s very deserving winner, Milana, with the award.  Milana embodies everything that NP stands for and has been one of our most ardent supporters from the very beginning!  Congratulations Milana!  At the time of presentation, we explained the very obvious absence of the Positivity Stick as a minor oversight that we would have remedied in time for Tom and Rick’s return (or so we hoped).

Following the workout, we continued to search high and low for the Positivity Stick, eventually drawing the hopeful conclusion that it mustn’t have been stolen but rather picked up by a diligent security guard… which, in fact, turned out to be the case.  A few frantic phone calls resulted in The Forks’ parking security confirming that its watchful guard had found the errant Positivity Stick on his early morning rounds and picked it up thinking that it must have been garbage (WHICH IT MOST DEFINITELY IS NOT!).  Luckily, we managed to intercept its disposal and it is now safely back in our possession.  Tom and Rick (aside from this little confession) are none the wiser.

EDITORIAL NOTE FROM TOM AND RICK:  This type of mishap would never happen under our watch. We would be more likely to accidentally break the positivity stick having a sword fight.