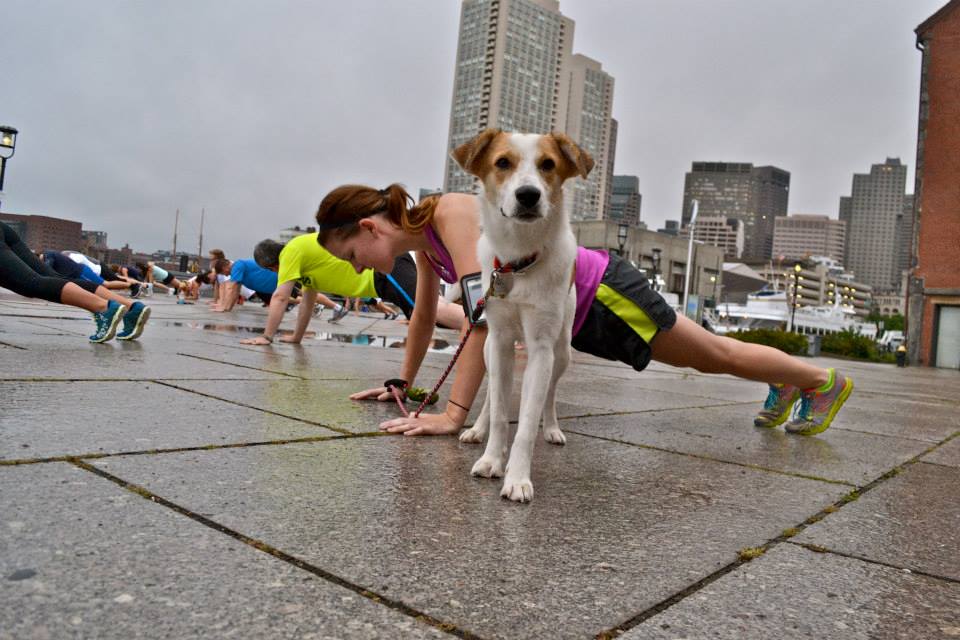 I’m very proud to bring you today’s guest blog post. I’m partially biased (I asked her to marry me, she said yes) but it’s got some info that EVERYONE could afford to hear. As for your regular announcements, they’ll be at the end, after you finish reading this. Read it. Share it:

I became sick in December 2014 and took what I hoped would be a brief hiatus from November Project. During that time, I wrote about NP and thought it would be nice to share it with you when I returned. Now it’s May 2016 and what seemed like the flu has become a chronic illness. I won’t be back anytime soon, so I guess, why wait?

I learned about November Project in September 2012 while living in Boston. I met these two guys at a bar. “We do this thing called November Project. We work out with hundreds of people…you know…getting fit,” the tall one said, pulling up his shirt to reveal his abs. Sounds like a bunch of douche bags, I thought to myself. I started dating one of these guys and continued to hear about November Project for months.

“It’s too early” or “I’m not into fitness” are some of the excuses I used to avoid going. While 6:30 IS TOO EARLY and I’ve been told I’m remarkably unathletic for my frame, an excuse is an excuse. This is besides the fact that I was lying. I was afraid.

Why? I’m not sure if you’ve heard, but there are humans at November Project. LOTS OF THEM. I’m at my best in a group of two. At most, one human and one dog. As I child I was taken to therapy when my parents feared I had an anti-social disorder. You could count the amount of people I spoke to on one hand and my own family members offered me quarters in exchange for hugs. November Project sounded like a complete nightmare. Going was a no. A firm, no.

In February 2013 “The Today Show” was visiting Boston. The workout location was going to be alongside the set. #NPTV. I was lured by the bright lights of television and the close proximity to my apartment. If there was ever a time to try it, this would be it. On Sunday night I caved and told my boyfriend I would go. Filled with nerves, I felt instant regret. I barely slept that night as I counted down the hours. In the morning I woke up nauseous with anticipation. Why had I deliberately chosen to start my week by sleeping horribly and mull around my apartment as vomit loomed?

I left the house. I dreaded every second on the way there. In those moments before 6:28 am I wanted to DIE. Everyone looked so comfortable amidst the morning chatter. It felt as though they all knew each other and I was an outsider. Then I heard the soothing voice of Brogan Graham (just kidding, have you met him?). He motioned for us all to bring it in, get a little closer, and bounce. Finally, I felt anonymous and my jitters dissipated. The workout soon followed. It was challenging, physically and personally, but I remember looking around and realizing no one knew this was my first time. No one knew how scared I was. I could just be. The workout ended and we ran home (well…I ran a couple blocks until I was sure no one could see me. Then I walked).

For the next couple hours I felt some kind of high. I practically danced down the streets, wanting to spin and point at everyone saying “MONDAY IS GREAT, YOU’RE GONNA LOVE IT!!!”  I had done something that terrified me and I was okay. I needed to feel like this again. I needed to go back. I did.

I thought eventually the pre-NP jitters would dissolve, but I still have them. November Project does not feel natural to me. If it were a verb, I DO NOT november project. I do my own thing to a fault. When we are asked to “partner-up,” I practically shit my pants.  It doesn’t always feel like it, but I know I’m not the only one. Maybe you know someone that went to their first November Project and watched from the distance IN A TREE. Or you finally decided to go, but you saw the group in the distance and turned back home. Don’t wait for the stars to align. By the time you finally go, you’ll wish you had started sooner. November Project is for everyone. There is the running junkie who flies through ultras like I do grilled cheese. There is the life of the party, the cat lady, the former couch potato, and the actual couch potato.  Your people are there. You’ll find them.

We’re doing this workout series called #NP_Primaries. Coinciding with the US Presidential Primaries, the DC crew will live up to its reputation as the political junkies we are, or at least pretend to be.

How it works:
Each Wednesday workout following a Tuesday primary will be an NP_Primary.  We will specify how to earn delegates before the workout. After you complete the work out, please enter the amount of delegates earned in the Tracker. Winners of the election will win sweet swag from The North Face.

FRIDAY: Check the TRACKER for the meet location, 6:29AM #EarnYourWeekend