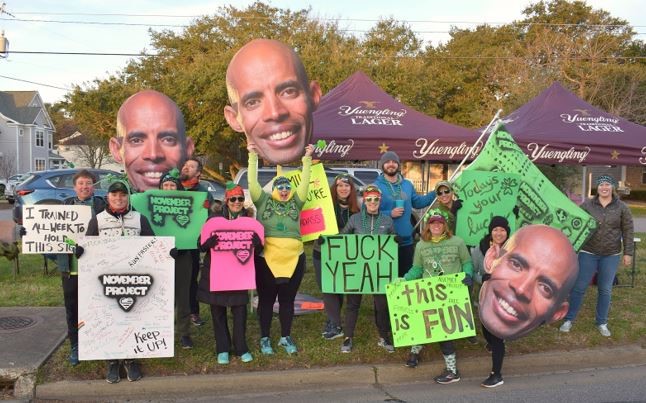 Hi! I’m Jennette. You may know me as Rainbow, or Rainbow Unicorn. I’m an introvert with social anxiety who loves cats. I have probably told you way more about cats than you ever wanted to know. But that’s not why I’m here, writing this blog to you. I’m here to ask you to join your fellow tribe members at the Harbor Lights Half Marathon and 10K cheer station 11/24/19. If you are running the race, like I am, you will have the joy of running past a pretty ridiculous group of people cheering your name.

My life before November Project was a basic, boring active lifestyle. I signed up for the same races every year and mainly signed up to stay motivated with running. I stuck to the same distances and didn’t challenge myself any further. I didn’t have many running friends; I really didn’t know where to find them. I was clueless to the many local run groups we have in our area.

Around the time I fell into November Project VB I was looking for an early morning run group because my motivation was lacking, and I thought it might be safer to be in a group. I was running at Mt. Trashmore on a Wednesday morning and literally ran through PR day. I thought these people were crazy as they were smiling running up the stairs to do burpees. But I found myself researching this insanity and thought it kinda looked like fun.

I read and re-read the website and it said it was free. You just had to show up. I was very skeptical especially about the hugging. I believe hugs are earned; you can’t just give that shit away. But after all I was looking for a group and they met ten minutes away from my house at the exact time I was available.

In May of 2017, I started showing up every Wednesday. Before I knew it, I had some friends and it was Shamrock 8k time! I will never forget coming around one of the turns and having people cheer me on by name. John, our OG leader who brought NP to VB, was there giving me a high five. I wasn’t used to people knowing me at races and cheering specifically for me. That last mile was the fastest mile of that race and probably the fastest I’ve ever ran.

Before NP I had zero interest in going to a cheer station. I never wanted to skip one of my runs to go cheer and not get any exercise. I thought it would be boring. But it turns out that Shamrock weekend is a pretty big deal around here and my new friends at NP had a cheer station for the Sunday half and full marathon. I wanted friends so I figured I could go for a little while and still make my Zumba class at the gym.

I wanted to be prepared so I made rainbow pom poms and a rainbow ridiculous headband and wore my rainbow tutu. I worked hard on my sign that was double sided because I couldn’t decide on what I wanted my sign to say.  That cheer station was AMAZING! I spent 4 hours bouncing up and down cheering for random strangers and some people I recognized from NP. Remember what I said about not thinking it was enough exercise?  Yeah, I was WAY wrong. Have you ever tried bouncing up and down for a few hours? Holding a sign up takes a lot of work. I ended up staying all morning and not attending my Zumba class.

Here is why cheering was so amazing. The cheer station was at miles 2 and 10, which meant runners were passing us at mile 2 and then again at mile 10.  Being in a cheer station you are there super early and get to see the elite runners run by – they run so fast I can’t wrap my head around their pace.  Whooosh- they are gone. I’m not sure if they are reading my sign. As the groups of runners start coming by at mile 2 you see everyone so excited, happy, some are running this distance for the very first time. There is so much energy and when you see people reading your sign and smiling you get excited. When everyone starts coming around the 10-mile mark you get to see such a variety of emotions. So many focused faces and some discouraged faces as these are the final miles for the half marathoners and for the full marathoners, well they have a long way to go. This is the time that these runners need you the most. You are jumping up and down being absolutely ridiculous to bring some joy to these runners. When the pained faces look at you and see you are out here still with them, they smile, you see them get some energy from you and continue running.

Recently I was a traveling cheer station with my friend Rachel Ritter in DC for the Marine Corps Marathon. We were expert level weatherproof cheerleaders. The forecast was 100% rain. All. Day. But being weatherproof we were prepared. We were also prepared with ridiculous hats. I had a new very large ridiculous rainbow on top of my head.  In the pouring ass rain, we were there with the runners. So many runners were excited to see us and especially liked my hat. I was a rainbow in the storm. We saw many tribe members and cheered extra hard for them. So many of them messaged me and thanked us later for being out there. It seems so silly because we only saw them for seconds as they ran by. But those few seconds carry you for miles.

Being on the other side as a runner with a tribe that will come cheer for you is amazing. My pre-NP life I had absolutely no interest in doing distance or running in a trail. I really thought I was too clumsy to try and run in trails and after my first half marathon in 2014, I said I would never do another half again. It really wasn’t fun, I didn’t have the proper clothing to be training in winter, I didn’t know about podcasts, and ran out of music constantly. But here I was making run dates with people I didn’t know very well, and I started making friends. Miles just go by so much better when you are with friends. Before I knew it, I was training for a 50K with a bunch of new friends sharing some miles with me.

I had so much fun training for the Seashore 50K that I signed up for the Noland Trail 50k before I even finished the first one. At both these races I was amazed at how many people were there to cheer me and other tribe members on. I mentioned earlier how silly it seems to stand outside in all elements for hours to see someone run by in seconds. But when I was running the Noland Trail, those few seconds that I passed people meant EVERYTHING to me. I just had to run from one group of friends at one spot, to another group of friends at the aid station. I can’t express enough how awesome it was to have everyone there. You know what else is amazing? Training with friends and then seeing your friend cross the finish line of a race they worked so hard to cross.

Hopefully I’ve shared the amazingness of being on both sides of a cheer station. If I haven’t yet convinced you, here are some fun facts. You have to be as ridiculous as possible and there aren’t many places where this is acceptable. Ever run by a dancing banana? How about a dancing unicorn? A dancing rainbow? A Fuck Yeah sign? Do you know how many runners went nuts over our Fuck Yeah sign at shamrock? This is FUN! Cheer stations have food, coffee, music and fun friends.

You definitely get your workout for the day and you have brought much needed joy to runners. For Harbor Lights Half marathon and 10K cheer station info join our Facebook group “#NP_VB Community Center” BELOW (You have to answer those “Troll Proof” questions or we can’t let you in!) or see Elizabeth O’Hargan. Have FOMO? Never fear! More cheer is coming! Thanksgiving Day we have a cheer spot for the Turkey Trot 10K near Mount Trashmore and of course the famous Shamrock cheer station in March.

Norfolk Harbor Half – Sunday Nov 24th 2019 – 7:00AM – At the corner of Dunmore St + Brambleton Ave. Bring Your signs, noise makers, obnoxious costumes and of course #GRASSROOTSGEAR Our runners need those NP Vibes, so be a good human and #JUSTSHOWUP!!!!!