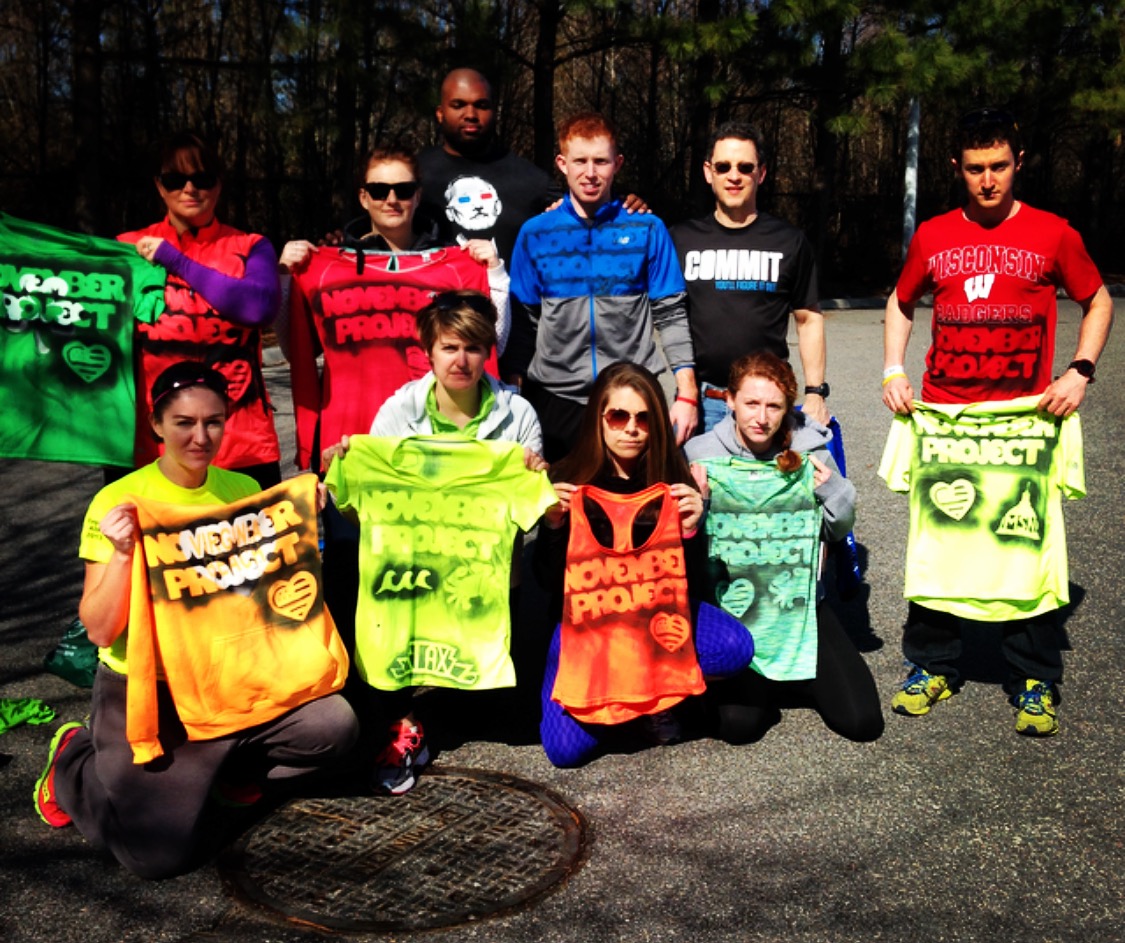 3.25.2015 Whoop! There it is! Still on a high from Shamrock Marathon Weekend. I mean we had 6 out of the 19 November Project Tribes in town. It is almost like we planned it (mini #NP_Summit??). Baltimore, Boston, Chicago, New York, Minneapolis, & Virginia Beach. Yes… I am counting ourselves. We are people too.

Meeting other people and connecting with other tribes is one of the things I love most about November Project. Each tribe and city comes with their own flavor but all bring the same love and positivity. It is almost like we had all met each other before. We had Jonathan Levitt (NP_BOS) shooting for a BQ Goal and he gave it his all. Super proud of Jonathan and inspired by his drive and goals. Then we have Mr. Lee Levitt (NP_NYC) & (Also Jonathan’s Dad) – Never having run further than 7 miles he straight up crushed the Shamrock Half with a 2:08 #NPDad killin it. Then we had Jackie (NP_BOS) Super nice and I’m pretty sure she ran everything you possibly could. 8K, Half, Full – That is a total of 44+ miles in a weekend ‘King Neptune Challenge’! Way to go Jackie! Then we had Rachel from (NP_MSN) Awesome human who also crushed a Half PR and got to ring the PR Bell, she also stuck around till Wednesday with a #traverbal at Trashmore. Let’s take a minute to talk about the Balty crew. Julie and Liz (NP_Bal). I love these girls and  they are pretty much the reason there is a November Project in Virginia Beach (well, sort of). About a year ago I signed up for my first Half Marathon in San Diego and at the starting line a small conversation about Boston (I was wearing a Boston Strong shirt) turned into me playing tour guide to a couple of nice nurses visiting SoCal for the week. They told me about November Project and I decided to go with them and try it out. I liked it and decided to keep going. After meeting some of the best people I know and making new best friends in San Diego. It became a major part of my workout routine & lifestyle. Now, one year later and I’m living on a different coast; and leading NP_VB. Julie, Liz, and I stayed friends and with a couple of #traverbals in between, our one year #NP_Anniversary was complete as they made the road trip down to Va Beach to run Shamrock Half.

Over the weekend, all the tribes got together for a couple events and while walking around the expo we spotted Cheri, another (NP_BOS) member and former local to VB. So excited! We decided to tag shirts in the parking lot.

Then race day. We all had goals in mind. Nic, one of our core members here in VB. I could not go anywhere without bumping into Nic. All by chance we bumped into him at the starting and finish line. Nic ran the RnRDC half last weekend and then the 8k & Half this weekend to complete the ‘Dolphin Challenge’. Way to go Nic! You’re a stud!

Along the race we had awesome support from other NP_VB members and when I finished and was waiting for my friends to come across the line. Someone walks up to me and says ‘Hey! You do November Project?’ ‘Where?!’ I said Virginia Beach!! He was like cool we do it in Chicago. Ben & Becca. Becca & Ben said they would #justshowup at Trashmore for Wed and dropped their #traverbal after just crushing 13.1 miles.

Now that we recapped the weekend and basically the last year of my life. Let’s talk about the workout on Wednesday. Sam had an awesome tag team relay setup. The relay had us so excited we  got confused. Which ended up with us running in a giant circle, squatting, crunches, jumping jacks, stairs, and more stairs.

The sun is beginning to come up earlier and earlier, which is setting us up for an awesome view/sunrise at Trashmore and an epic summer. Wait, let’s slow down.. Spring is still here. Lesson of the day: Enjoy every moment because life is short. Life is also awesome. Remember to relax and spend time with & call the ones you love the most.

Oh one more thing. Newbies keep showing up and its awesome. Keep showing up. If you’ve read this far, I don’t know if you’ve heard but November Project made the NY Times! Check it out!