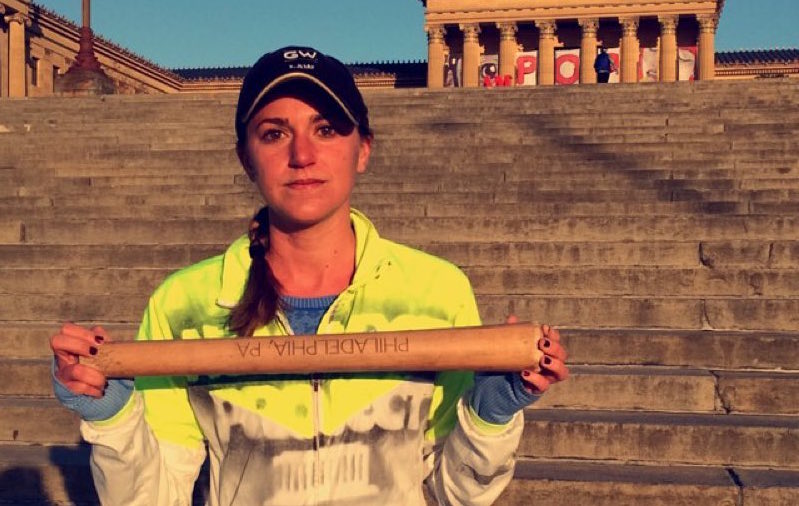 Before we get into the actual blog, check the tracker for the meet location on FRIDAY. We’ll see you for some less popular (and not poplar) cherry blossoms.

Today’s guest blogger doesn’t need much of an introduction. If you blink, she’ll already have passed you. If you show up, she’s there to hug you. If you read the following, you’ll understand why we continue to do what we do.

Two years. I’ve been coming to NP for two years now, crazy, huh. Two years of choosing to come to NP. Two years of waking up sometime between 4:30-5:30. Two years of running anywhere from 2-7 miles to then workout. Two years of the same people, the same patterned workout, the same burst of happiness when the bounce starts. Two years is a long time to choose to do something.

Two years ago, I would never have considered myself a runner. I never was a runner. In a former life, I played sports. Running was something I was forced to do to “prep” for preseason and pass the mile test. I picked up running while at Davidson College, but didn’t run seriously or very fast. After I moved to DC, running increasingly became a significant part of my life. But something was still missing. I bounced around various running groups trying to find people like me. People who weren’t “serious” runners, people who ran and loved it, and, more importantly, people who were social, friendly, and, frankly, just as crazy as me.

Just over two years ago, in December 2013, I came across November Project for the first time, in the Runner’s World article about the group. Something clicked, and I knew I needed to try this new-fangled group. It took me 3 months to work up the courage to actually go to the workout. I can’t say how many times I’d set my alarm, planning to go, but then came up with an excuse about why I shouldn’t — it was too cold, I didn’t know anyone, rain or snow. I even ran by the group a number of times, saw them in action during my own runs. I longed to join them, but couldn’t work up the courage. Then, one day, two years ago, I just showed up. I remember how people were so friendly and welcoming, and yes, pretty crazy, in the best way possible.

Two years ago, I learned what weatherproof really meant, when in my first few weeks, we had one of the most memorable workouts in the middle of a torrential rainstorm at the Library of Congress. Or during single-digit temperatures in the snow by the White House. Or during those lovely days filled with DC humidity and heat waves. NP has made me feel, at times, like a total athletic badass.

For two years, NP has been, at times, my only form of other human interaction, forcing me out of my shell of exhaustion or from the library. It remained a constant as my life changed professionally, and personally. It kept me sane, proving that I always had someone in my corner, as I trained for marathons, balanced internships, and homework. It travelled with me, as somehow most places I’ve travelled to in the past two years have had a November Project in that city. It has allowed me to meet the most amazing people, in DC, in Philly, in NYC, and has enabled me to feel welcome and loved in places far from home. It has pushed me to run races I never thought I would do, and run speeds I never thought I could do. It has introduced me to running buddies, race buddies, and the BEST cheer crew you can ever imagine.

For two years, people have called me crazy, and probably will continue to, for doing November Project. They always say that it’s so early, its such a hard workout, its so hot, its so cold, its so wet/rainy/snowy/windy to workout. But, after two years, I’ve been faced with the same choice. For two years, do I wake up now and go to November Project? And for two years, the answer is a resounding yes, followed by a Good morning! We’re all good. Fuck yeah.