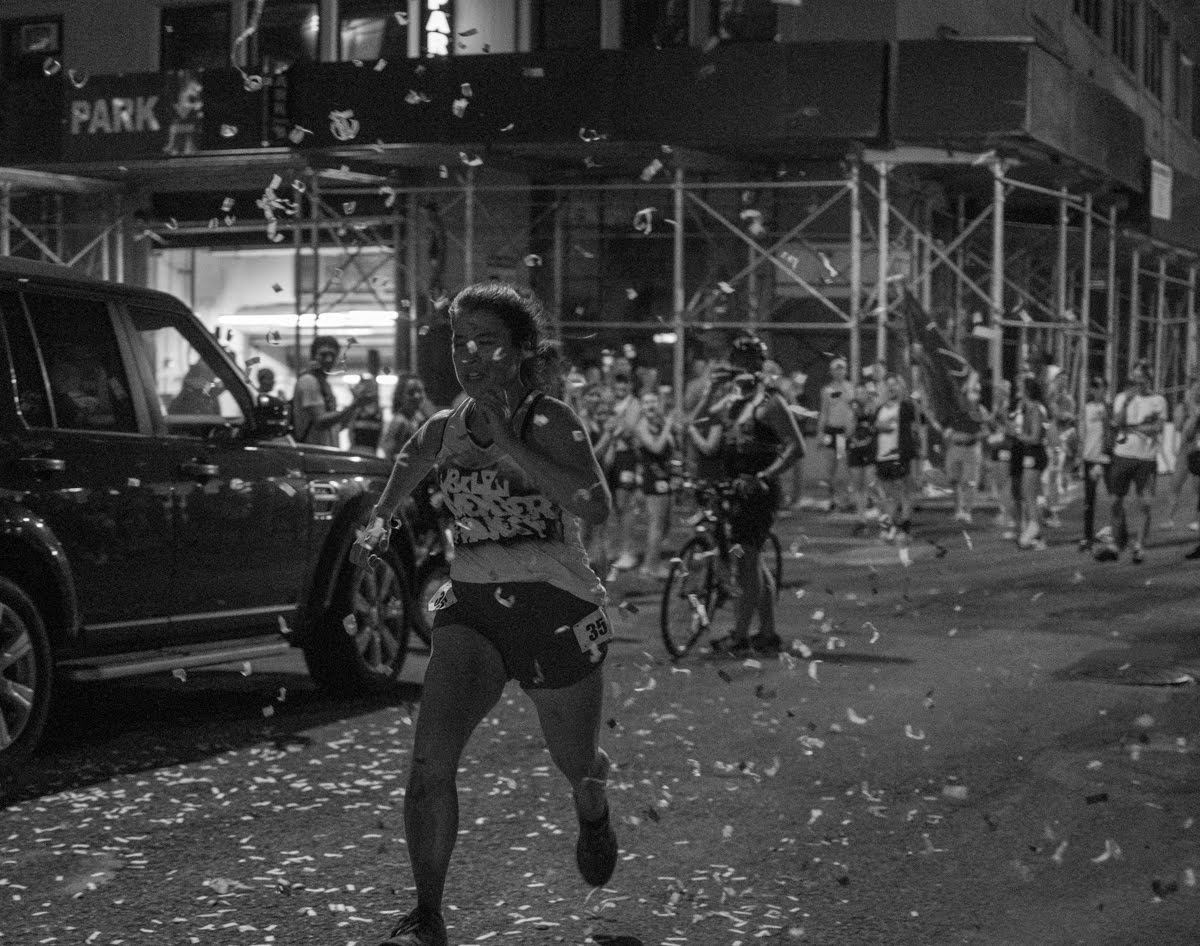 “Are you runner #35?,” he asked, straining to see my hip numbers through both the blinding lights and distinct darkness of the Manhattan Bridge.

“Yep,” I nodded quickly. I had already been through the wringer of emotions to a point where the self-pity had lifted, and I knew there was no time for mumbling. At this moment, I had been out on “the course” for over 45 minutes, distinctly aware that I would be finishing this race in last place, with a much slower time than the rest of the field. Waves of regret, disappointment, and bright, red embarrassment flooded my brain miles before, where my first wrong turn in Manhattan sent me on a wild goose chase for the characteristic, Take The Bridge checkpoint. That goose chase continued with a few additional wrong turns, including a too-close-for-comfort encounter with the Williamsburg Bridge, an actual third bridge completed (the footbridge near Delancey Street), and the eventual reroute back on the track I’d been so desperately searching for what was likely ~15 minutes, but felt like hours.

I’d been through every scenario in my head during that slog of a quarter hour: should I just DNF? What happens if I hail down a cab right here? How do I explain this to Reid (my now husband) and my other friends (some visiting from Washington DC!) who stayed out so late to cheer me on? How do I explain this to November Project Brooklyn, my community and family that I had just recently stepped up to lead? Had I failed them in representing what “free fitness” can do — enter a race I was clearly, wholly unqualified for and manage to royally f*ck it up with their spray paint on my chest?

And right as this last thought popped into my adrenaline-powered, wheels-turning-too-fast mind, clarity returned to my eyes, even as the moisture in my contact lenses continued to dry out. This had been everything November Project had ever asked of me: try something really f*cking scary, like waking yourself up way too early on a Wednesday, in a city you don’t know that well, to put yourself out there — in hopes of finding a community that accepts you. Like signing up for an elite-level, unsanctioned, nontraditional race, where you know the possibility of coming in last is real, just to say you’ve done it. That you’ve taken the bridge.

“Runner 35 has been located, heading back to the finish on Manhattan,” he spoke calmly into his walkie. The race crew member surged forward on his bike. His shadows lengthened, the churning of his legs propelling the bike and himself smoothly uphill. My brain now calculating where these final moments of power were needed, fighting against the desire to settle into an easy pace, even though the exhaustion (both physical and mental) begged for it.

As I reached a small peak, the bridge beneath me beginning to level out, I began to tell myself, “just get to that overhang,” a point along the Manhattan Bridge that we’ve used for a few NP BK workouts. There stood a shape of a person. A few more people right behind. More members of the TTB race crew, I first thought, probably very ready to call it a night. As I got closer, I recognized Kevin (#krankin, NP NYC Co-Leader), Maggie (my own Co-Leader of NP BK), and Russell (a well-known member of NP Chicago, NP NYC, and NP BK). Kevin starts Fallingwater on his speaker, carrying nearly everything on his shirtless back, as he always does. Maggie tells me it’s okay. We’ve got this. We’re so close. Russell snaps pictures of it all happening. All of the wrong turns, extreme self-doubt, feelings of complete failure wash over me. Well, kind of like falling water, actually.

“Try something really f*cking scary,” I had told myself a week prior, as I furiously entered my credit card number, registering for TTB online. Not knowing that a week later, it would, in fact, be really, incredibly scary — but I’d do it. I’d finish it, surrounded by family.

Take The Bridge is an urban, unsanctioned race series born in 2015 on New York’s East River bridges. They host competitive, communal night races, showcasing city bridges. The next TTB race is on Thursday, October 31st in New York City to kick off the TCS NYC Marathon weekend. Follow @takethebridge on Instagram for updates.