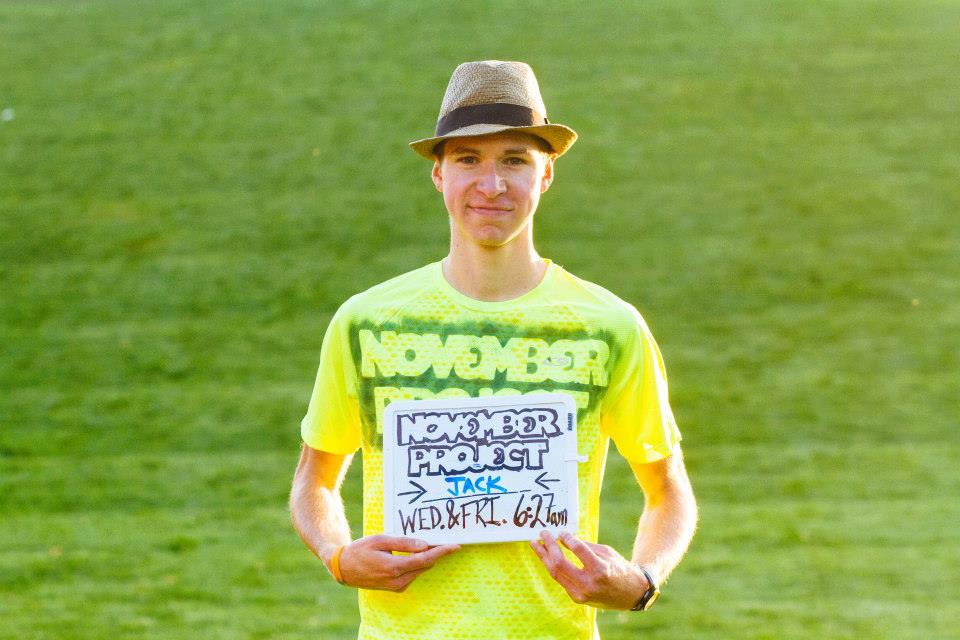 No, that’s not being completely honest, and right now, that’s exactly what I need to be. Let me start over.

Growing up, I always had to be the tough guy. I idolized toughness. My mantra was to exhibit a level of grit that would outlast any adversity that came my way. While I don’t think this mindset is exclusive to one gender, I also believe the countless times I was told to “Be a Man” or “Man up” were simply code for “Be tough.” And so, tough I was.

When we ran the mile for the first time in second grade, I was so determined to be one of the fastest in my class that upon crossing the finish line, I provided my peers with an all-too-real reminder that spaghetti with meatballs had been the mystery concoction in the cafeteria that day. Was it embarrassing? Yeah, absolutely. But there was also a sense of pride. After all, I thought at the time, no one else is that tough.

It was that toughness that allowed me to discover running back in 2011. Disgruntled with the outcome of an Ultimate Frisbee game my senior year in high school, I rationalized that my poor performance warranted a little suffering to make even. I exchanged my cleats for a pair of trainers and began running. Seven miles later, my anger was gone, and a new passion had been born.

Being tough allowed me to finish my first marathon a little over a year later. Shortly after that, I ran a second. And a third. And a fourth. With each race, my time kept itching closer to the 3:05 standard that would allow me to achieve my dream: running the Boston Marathon. So when I decided the key to shaving those last few minutes meant restricting my diet to get a bit leaner, I was just being tough.

The problem with eating disorders is that they often start out with a positive intention. Skipping dessert or sticking with water at a restaurant is generally considered commendable. The problem is when there’s nothing to fill the caloric void. If you don’t eat food, food will eat you. (Really though. Shout out to Tribe member Jeremy for this one)

Food powers the brain – both its conscious thoughts and emotions, as well as its unconscious regulatory functions. It powers the heart to keep blood flowing where the body needs it. That’s just the beginning. It powers the muscles, bones, vital organs, eyes, and so much more. How do I know this? I didn’t read it in a textbook, and I certainly can’t give you the scientific breakdown of how it all happens. I learned it the hard way.

It started out as a game. Every time I could walk away from something conventional nutritional wisdom would deem “unhealthy,” I chalked it up as a win. Someone brought donuts to the office? Ignore them, and it would be a “W.” Just be tough, I would say, and you’ll keep winning. Little did I realize that I wasn’t winning at all. I was losing.

First, it was the bloody noses. Ah yes, the mark of toughness, I thought. Then came the muscle aches. Keep being tough. You’re just getting leaner. Soon after the muscle aches started, the bones and joints followed. My ears struggled to reach equilibrium. I struggled to stay balanced, and got dizzy at times. My vision deteriorated (which isn’t good for someone who is already almost legally blind without corrective lenses). It wasn’t long before my immune system started faltering. For the first time since third grade, I contracted the flu – twice. I also developed a bizarre bacterial infection in my ankle called cellulitis (Not sure what that is? Yeah, neither was I. Google it!) not once, but twice also.

Those were all physical problems though – the “curtains” as I called them, because they were all conditions any healthy runner may develop here and there (minus the cellulitis perhaps …), and could be easily used as an excuse for my continually declining performance and energy level. I call them curtains because what they masked were the problems that were worst of all – the ones affecting my mind.

As mentioned, if you don’t eat food, food will eat you. Literally. When you begin to starve yourself, your mind begins to obsess over food, always trying to plan and control every micronutrient that goes into your body. Eating becomes a strict, ritualistic process to the point that any disruptions can create cause for concern. Food is such a large part of your thought process that the other things you once found interest in suddenly become dull. I stopped listening to music. I struggled to sit through an entire movie or sporting event. I just wasn’t interested. Romantic interests? Maybe Betty Crocker. Ironically, my passion for running, the thing these games were supposed to help me improve, was waning too.

Every run started with a groan, and honestly, I was lucky if it didn’t end fighting back tears. Every step seemed to ignite another ache or pain, and soon the idea of lacing up my trainers became something I didn’t desire. My body was crying for help. Unfortunately, I kept my focus on “being tough” at the dinner table – or to be more specific – getting away from it.

Eating disorders are vicious in that the more you starve yourself, the more impaired your mind becomes in making rational decisions. Didn’t I notice that I was far less healthy than I was before I started cutting things out of my diet? Sure. Wasn’t I also aware that this was starting to impact my relationships, my career, and my happiness? More than I’m willing to admit. So the results were no surprise when a nutritionist I worked with asked if I would be willing to do a body fat index test. Not only had I lost 25 pounds and stood at a brittle 6’2” and 135, my BFP was tinkering on 5%, approaching dangerously low levels.

Webster’s states that toughness is “strong and durable; not easily broken or cut.” All this time I thought I was being tough. In reality, I was turning myself into just the opposite. I wasn’t tough at all. Thankfully, there was something else in my life that was: The Tribe.

I have yet to meet a more impressive group of absolute studs who impress me with their energy, openness, and welcoming attitude week in and week out. For me, working out with November Project is like getting to sit at the cool kids’ table. I feel good about myself. I feel confident. I feel alive. In what was the darkest of times for me, it was the Tribe that kept me afloat. Even on the days when the aches and pains of my eating disorder left me limping through workouts, my dissatisfaction with my performance was always silenced by the cheers of encouragement and hugs from the Tribe. They didn’t judge. Rather, they believed in me when I didn’t. To all of you, thanks.

By now you might be asking, why is he telling us this? Why is the guy who wants to be tough admitting that he isn’t? Well, in reality, I should have shared this months ago. Today, I’m pleased to say that I feel firmly on the road to recovery, and in being at a healthy weight and state of mind again, the picture is a lot clearer for me.   I am grateful that I had many people around me, like the Tribe, who cared enough to talk with me about my situation and offer to help. However, I recognize that every story doesn’t always have a happy ending.

Experts at Stanford University have coined the term “Duck Syndrome” to describe the act of “gliding calmly across the surface of the water, but paddling frantically underneath.” Unfortunately, there seems to be a societal pressure on us to create this illusion that we lead perfect lives, causing us to deal with our struggles privately. The rise in depression and other mental illnesses gives indication that this way of living is unacceptable. As the article states, the bottom line is this: “Pretending that everything is OK when it’s not OK, is well, not OK.”

The most special thing about November Project is that every time you make the decision to just show up, you’re greeted with a hug. You may not know the person. You may not share many interests. But yet, you know that they also set their alarm to get up to come work out with you, motivate you, and congratulate you when you’re finished. That commonality alone creates a level of trust, and it’s that trust that gives me the confidence to share my story. In a world that can sometimes make it hard to believe, November Project has shown me that an environment of compassion and free of judgment is possible.

When I head to Boston to fulfill my dream in a couple weeks, it will cap off an almost five year journey since that Ultimate Frisbee game in 2011. That journey is cause for celebration. In fact, the B.A.A. recently published bib assignments for the race, and as though it were penned into the script, when I toe the line in my bright orange November Project top on April 18, I’ll be carrying the number 2011. That won’t be all.

I’ll carry with me the lessons learned from the thousands of miles of training, the highs and the lows, and most importantly, the strength to appreciate my body. I have recently moved out to the mountains of northern Utah, and though I don’t get to show up on the space between the Guthrie Theater and Mill City Museum every Wednesday at 6:27 AM, the spirit of NP MSP burns bright within me. Yes, Boston won’t be about a time, a place, or a record. It will be about celebrating being me again.

November Project, I can’t wait to see you at Mile 18, right when my legs might start to have second thoughts. As it has so many times in the past, your enthusiasm will motivate me to persevere, and truly be something I haven’t been in quite awhile – tough.