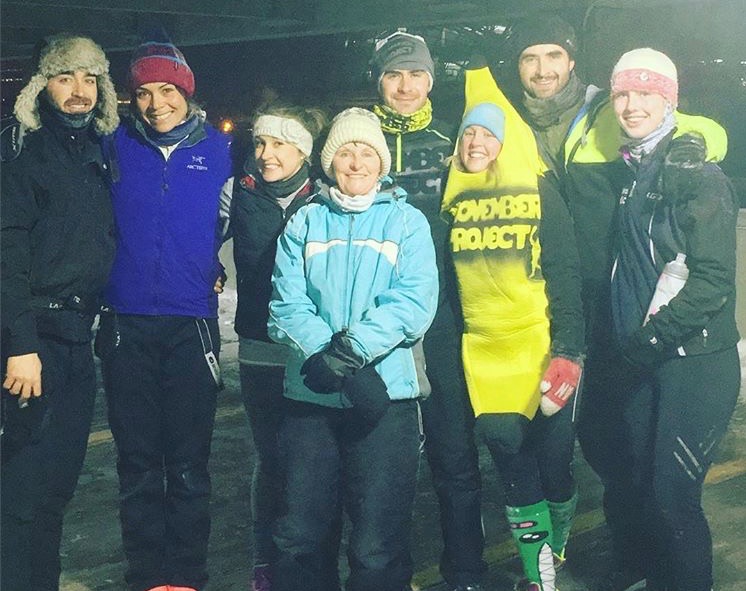 Wisconsin Notes: We have a new leader and he is Hot (like – temperature wise.  Duh).  The #NewsMedia showed up for the big announcement – check out Shaw over the weekend to see how we keep warm in -30.  NP Buffs for sale next week – prices TBC but it will almost probably for sure be $5 each.

From Rick: I asked Derek to write a quick intro to himself for the blog, thinking I would write a bit of an intro to him myself and explain why we picked him, and include his short blurb.  In true NP Leader fashion he wrote an entire book, and it certainly needs no intro from me.  He’s gonna fit in just fine.

One year ago, in the deep darkness of winter, my good friend Amie tried to convince me to come try out a workout group at The Forks at stupid-o’clock in the morning in minus 30 temperatures. I half committed to it one week, but I didn’t show up, (big faux pas, I know) and then she threatened to show up at my door if I didn’t come to the next one. So I went, and it was fantastic. This group was called November Project Winnipeg (actually at that time it was still Winnipeg Gone Rogue)

Being up at that hour, out in the fresh air, with a group of crazy, fit people (they all hugged me, I was a little weirded out at first) awoke something in me that had been missing for a while; a desire to not only start working out and pushing myself again, but to be a part of the community, something bigger than myself.

Looking back at the year that was, I had the chance to reflect on how much of an impact November Project has had on me. Facebook does a little year in review for you at the end of each year, and as I was looking at it a couple weeks ago, I noticed two things; a) I made a lot of new friends and b) over 80% were from November Project.

I used to run a lot, and the years prior to last year I had lost interest and motivation. But then we had PR day, sunrise 6k, and in the spring we had our first tribe showing at the MEC race. The fire was reignited. Having some super fast competition in Graeme and Nathan, I had the race bug in me, and I wanted to run everything. The tribe helped push me to a sub-90 minute half, to cap off a season of 5, 10 and 15 km races.

November Project helped remind me of what I am passionate about, that when it comes to fitness and being fit, there are no excuses, you just show up, regardless of your ability and current fitness level. It doesn’t have to cost anything, and there is no judgement. (Unless you drop a verbal and then don’t show, like me on my very first week)

When Rick and Tom asked me to come on board as one of the co-leaders, I was humbled, and excited, and nervous as hell. But I guess if it’s not worth being nervous over then it’s not worth being excited about. I was nervous about the workout not being great, I was nervous about having to raise my voice and speaking in front of a group, I was nervous about the TV crew being there. I didn’t sleep much last night. But once I got there in the morning, and people that I’ve been working out with all year started showing up and saying good morning, all the nerves went away and I was just pumped to be there and get the workout going.

Rick and Tom asked me to write about what I hope to bring as a leader, and the answer would have to be more of what they do every week. They’ve built November Project Winnipeg into what it is now, one of the best tribes with the most consistent showings of weatherproof weirdos. So I hope to help keep that vibe going; the pop-up workouts (we had quite a few last year, and we have a few new ideas for this year), the energy during the workout, the constant encouragement, the social media hype, the community involvement, the race presence (#ownthepodium), the extracurricular activities (great skate, ski races, festival are on my immediate radar).

Thank you everyone that made the first workout great, also can’t forget to send a special thanks to my dearest mother who came to her first ever workout. She crushed it.

Today’s positivity award needs no introduction either. Bernie heard about November Project on the #news and hasn’t missed a workout since.  His story is incredible and inspirational and is worthy of a blog post all on it’s own (eh Bernie – what’dya think?) but without going in to too much detail, Bernie is a dude who discovered fitness later in life, and it has been so incredible to watch the more recent part of his journey.  He has overcome significant health issues and continues to push on, showing up week after week with a big smile and puts in work like no one else at the workouts.  He is a true example of the fact that November Project and fitness in general is truly for everyone and that any excuse you think you have for not improving yourself every day is complete garbage.  Thank you Bernie for your commitment to the tribe, for helping us understand that this thing we do every week is important and for showing us that it’s all in the attitude.