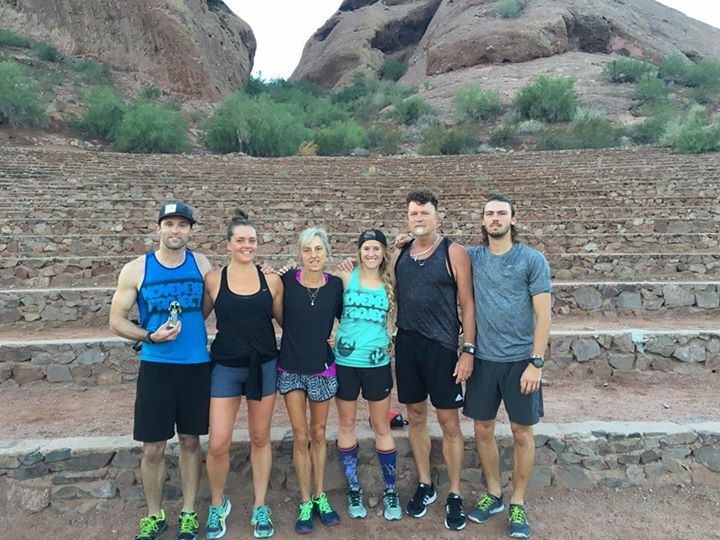 It is human nature to be communal. To belong to something greater than just yourself. We have an innate need to be surrounded by people who understand us, inspire us, and support us. I would assume that it is not a coincidence that the powers that be in November Project chose to call each individual group a tribe as we are by definition tribes. A tribe is a group of people who share common interests and values and show genuine appreciation for one another.

In the months since our tribe in Phoenix was formed, I’ve witnessed this incredible group of strangers become like family, fully embracing the tribal concept. I can see that the group strives to be their best selves yet at the same time they strive to help their fellow tribe mates do the same. It has been fun for me as a leader to sit back and observe how the tribe is giving to one another and what they are taking away from one another.

At the end of this week’s workout, I was reminded of this tribal mentality. The Scott family approached Trevor and myself at the end of the workout to let us know that they would be flying back home to South Africa after spending several months in the Valley with our tribe and that they wouldn’t be back in Phoenix until the Spring (they split time between Phoenix and SA). They wanted to thank us for the acceptance and support of the tribe. They presented us with a gift from the Zulu tribe in Africa – a gift from one tribe to another tribe. The gift given was a colorful bracelet traditionally given to warriors going off to battle to remind them of the tribe back home while away. For us it’ll serve as a reminder of tribe members who are far away but with us in spirit while away from the tribe.

I spent the remainder of the day reflecting upon our tribe here in Phoenix and the other ways in which they have embraced the tribal spirit. I was struck by the number of tribe members who by sharing their individual talents make us a stronger unit and that even in a “me, me, me culture” they still believe in doing what is best for the group, even if it is at a small cost to themselves.

Take this past week as an example, one of our tribe members showed up early to the amphitheater and swept the rain damaged stairs, in the dark, BY HIMSELF to make the stairs safer for the tribe without being asked and without looking for thanks. It was really dark and it was hard to make out who it was, but when I asked who I thought it was he replied, “It wasn’t me, and it must have been a figment of your imagination.” How cool is that?  I know it was early, but I was not dreaming! Thank you mystery stair sweeper!

Take all the times the media savvy members in our tribe have written
incredible newspaper articles (Shout out to Bob Young!), and countless blogs aimed at spreading the word and recruiting new members.

Or the times that the healthcare professionals have helped those who have
fallen when the stairs bite back.

Or all the times that out members who work in the running
community have spread the word at their own jobs, and further encouraged a sense of community with discounts on races, and headlamps so we can all keep going in the dark winter months.

Or the time…well, you get the idea.

I love the tribe.

One Reply to “The Tribe Has Spoken”