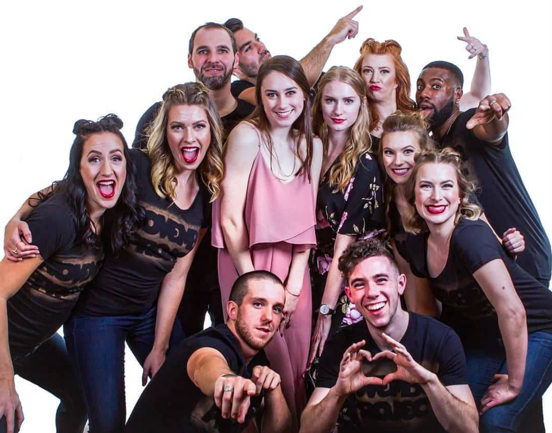 So as previously mentioned I joined NP in February last year and for the first solid like two-ish months I barely talked to anyone and would linger on the edges of groups and conversations (which is actually what I still do but now I know a bunch of you guys ) and was generally there for the hype but due to intense social anxiety had a really hard time actually approaching and making conversation with everyone. Near the beginning of May last year that changed. I think the first big difference actually came with Josh bringing Kali to a workout. Dogs are magical that way, the bringers of friendship and whatnot. Next was Adi running the BMO Marathon for his birthday. I struck up a conversation with him about that and that was kind of the beginning of our friendship. Leah’s birthday was a couple weeks later (on May long) and a bunch of us were going skydiving. We needed a certain number of people to get the cost down so I started bugging Josh (who really had become a friend to me over the previous two weeks due to me taking Kali to NP while he was in LA) and eventually convinced him to join us in skydiving. Adi tagged along the day of and the three of us kind of hung out and joked and had a ton of fun. I ended up going to Kelowna that evening and hanging out with Adi and a few others. We went out for drinks and had a group games night in the park the next evening and then Adi and I went on a short biking wine tour with some people from his lab on the Monday. It was such a fun weekend and was the most natural friendship I had ever made. Everything about it was relaxed and easy and it probably helped that running, biking, swimming and all the other crazy things we do were something we had in common. And yeah, that’s the story of how Adi and I became friends! And kind of how Josh and I became friends too.

Friendship? What’s that? Is that a thing? I hear it’s a myth. Kidding! Obviously, friends exist from all over, but what about strangers being friends? Is that possible? I never really thought so, until I became friends with hundreds of strangers around the world, almost immediately. How? Through November Project. A simple free fitness workout that happens once or twice a week. Let us start with the guy who introduced me to all these new friends. Adi. He came from Edmonton and was pretty new to Kelowna. Who would’ve thought the Okanagan foreigner would’ve been the one to introduce me to new friends!? But that’s what happened. He told me to go to this crazy morning workout, I called him crazy… But eventually I gave in. The kids’ persistent. He’s a super active guy and always trying to get me to go out on outdoor adventures. It was fun getting to see things from a different perspective. This guy I swear to god does anything outdoors and does it fairly well. Ever since then we’ve been friends, or mutual acquaintances depending on how mean he is that day to me (insert audible crying). But back to these other people… They were just like him? Just as outgoing, just as kind and encouraging. They’re also incredibly welcoming, despite me being between 3 and 20 years younger than nearly all of them! They all had such positive vibes around them and it became almost like a second home to be surrounded by all these people.

I started showing up for social events and getting to know these people even better. All of a sudden it became like a second home. A place where I felt safe and comfortable to be myself, to the best that I can. I became encouraged to be better as a person, and grew the courage to start meeting more friends like this around the world! Now I’m in contact with a bunch of people from Los Angeles as well. It’d be too hard to name them all. But some who come to mind are Kaitlyn, Maggie, Tara, and Joel. These people were part of the Los Angeles crew, and they are all just as unique as Adi and the other family back in Kelowna. They love doing outdoor things and having fun social events.

Through meeting these new friends I’ve had the chance to experience the world from a whole new perspective. My friend Olivia convinced me to literally experience the world from a new perspective… Skydiving??? These people are crazy, and I absolutely love it. What about rock climbing? Sure! Nerd Olympics? Sure! Pulling a bus for charity? Why not! Dancing in front of strangers to raise money? Absolutely! 4am morning sunrise hikes? That was a tough sell… But yep it was done! These people have changed my life and have become friends for life. The memories I’ve created and the memories I have yet to create excite me to no end. I cannot wait for what the future holds in store with everyone