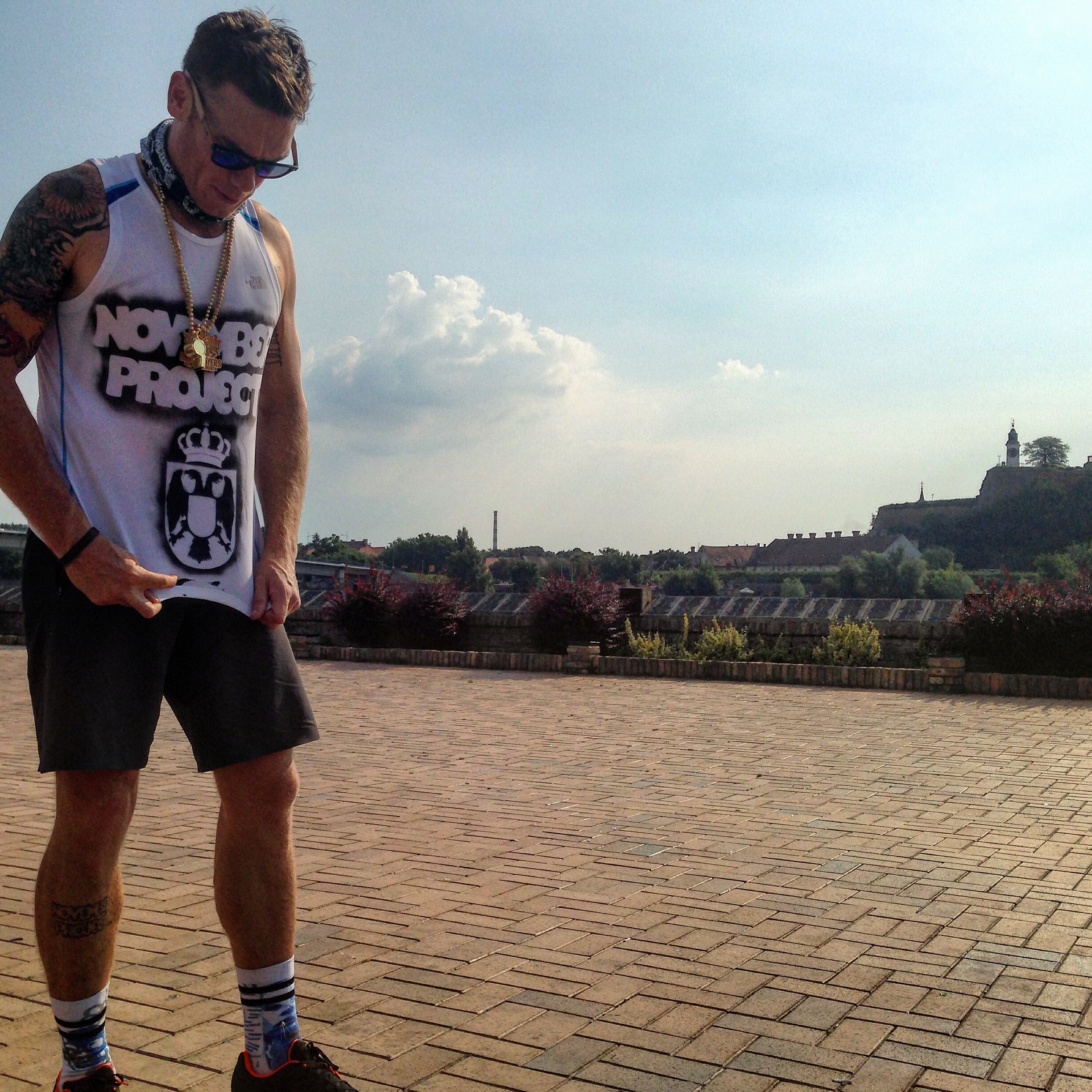 If you asked me to summarize the seven days in “The Motherland” in one word, I would say UNREAL, and then I would show you this photo (above) that I dropped on instagram few weeks ago. This moment in time captures so many things that define who I am today, and to see them all seamlessly blend together, makes me very emotional. But more about that later.

At this point, most of you know that I am a Serbian fellow that was lucky enough to row on a full athletic scholarship at Northeastern University where I met the one they call BG. BG and I, years after our college careers ended, re-connected back in Boston and after few cold PBR’s, started this FREE fitness movement that is currently sweeping North America and soon the world. But that story has been told many times, and I’m sure you’ll all sick of it at this point. The story you don’t know, is that for over a year I’ve been hoping to bring November Project to my hometown Novi Sad, Serbia.

Mihajlo Jovanovic (or Mix as everyone calls him) is a one of my best dudes from home. We used to be teammates at our hometown rowing club and remained good friends to this day. Few years ago, Mix went to Hawaii for friend’s wedding. On his way back to Europe, he decided to swing by Boston for few days hoping to see what the hype is all about, and of course to experience November Project. So he destroyed few concrete sections on Wednesday morning at Harvard, and raced some hills on Friday at the Summit ave, and loved every second of it. He couldn’t believe the camaraderie, the encouragement, amazing vibe that’s going down that early in the morning, and most of all he couldn’t believe how badass the workout was. On his way back to Serbia, he decided that bringing a free workout concept to our home town is a something that needed to happen immediately! After all Serbia was still in a recovery mode from years of political sanctions, economic embargo, and doing something for free wasn’t really a common thing.

Few years ago, a guy named Dan Berteletti moved from Boston to Denver, and without really knowing much about anything Colorado related, decided to bring free fitness to A Mile High City. But before he started dropping #NP_Pledge into his tweets, he created a Facebook group to which he invited anyone and everyone as a test of interest in Denver community. If the test was successful he would turn it into official NP tribe. Mix followed the same pattern, and shortly after his return from Boston, a group called Dobro Jutro (Good Morning in Serbian) was created in Novi Sad. The interest was encouraging, but Mix was a one man show. His idea was that as the group grows there would be someone that will step up and help out with day-to-day stuff (social media, photos, etc), but no one did. So content with the smaller group (about ten members) and excited about having a workout regiment that involved at least two scheduled morning sessions (Tuesday and Friday), Mix and Dobro Jutro pushed along for over a year without really trying to grow any further.

It was always my dream for a first European tribe to be in my home town, and Mix was alway the guy I trusted to lead it, but I also understood that in order to make that happen Mix would need a co-leader that would help out with organization. So I reached out to him and asked if he would be interested if we combined forces to hold an official NP popup in Novi Sad with a goal to shine more light on his group and hopefully come up with some good co-leader candidates. He loved the idea!

So on Friday at 6:30AM, we held a popup that to this day is one of my favorite workouts I ever attended. The magnitude of combining the friends from my past days of rowing in Novi Sad, with the newly founded friends from Dobro Jutro, mixed in with the family, and my American friend who’s mother calls me her “Third Son”, was so strange but somehow very familiar.

Throughout the whole workout that I lead, I maybe said ten words in English and they were “This is the last thing I’ll say in English”. Yet somehow, BG understood everything that was going on. He didn’t need translation because he speaks hugs and is fluent in high-fives! He can do burpees in 25 different languages, and sprint as hard as he can in all time zones. My sister, who was 17 when I moved to Boston, now thirteen years later is running up the stairs and doing box jumps by the river while wearing #GrassrootsGear. If I didn’t look at her face, I could easily mistake her for Micah Risk or Sara Wild. The setting was different yet the scenario I’ve seen so many times. But then it hit me.

Even though we’ve been international since the day Edmonton joined the NP family in the Summer of 2013, it didn’t really feel that way until I captured that photo from the beginning of the post. There he was, Brogan Graham, over four thousand miles away from where we met and went to school together, standing in front of the bridge that was destroyed by NATO bombs in the summer of ’99 lead by the country that I now live in and call home. He’s wearing the tank top made by a company that is now supercharging the free fitness movement we started as a dare. The tank top is spray painted “November Project”, and the Serbian crest underneath was made with the stencil that a dedicated NP_Boston member made for the marathon relay race team I was a part of at Bear Mountain, NY. The clock tower that’s visible in the background is the same clock tower that’s tattooed on my left shoulder. As I was looking at the photo, just seconds after I snapped it, I got teary eyed. Luckily I was wearing sunglasses and my tears mixed in with sweat so no one noticed my moment of softness.

But that’s not where the story ends. After the workout in Serbia, we headed to Zagreb, Croatia. Only 20 years ago Serbia and Croatia were in the midst of a civil war, and even though things calmed down significantly, I was still nervous about how the workout is going to go down and how is something like November Project going to be accepted especially since one of the guys that started it is Serbian. There was also a “who you know” factor. In Novi Sad I had connections that I knew would come, in Zagreb it’s completely different story. Aside from an old college teammate who lives in New York City and who’s parents and sister we were staying with, we didn’t know anyone. This could be a workout where just BG and I will do burpees by the fountain.

But it wasn’t. Tajana, our host did an excellent job recruiting bunch of people that unfortunately ended up bailing via text message as we were approaching the meeting spot (international verbals need some work). But the part we were mostly surprised by was the appearance of the two studs with a familiar N across their chest. These were the current Northeastern University rowers from Croatia, that instead of sleeping in as all college kids should during the summer break, decided to get up at crack-ass dawn and throw it down with their fellow Huskies.

During those seven days in the Balkans I was able to show BG things that made me who I am today. Some of them are beautiful (the food, music, customs, and the most generous people in both Novi Sad and Zagreb) and some are very sad. BG can certainly tell you more about it himself (please read the post, it’s very good). But one thing that was crystal clear to both of us, is that The November Project World Takeover continues and it’s only a matter of time before it hits Europe. Mix’s group through our popup got more exposure and as a result I’m confident that he’s much closer to finding a solid co-leader that will help him grow. Zagreb may be little behind, but not by much. And the tribe… the tribe is Stronger than ever!