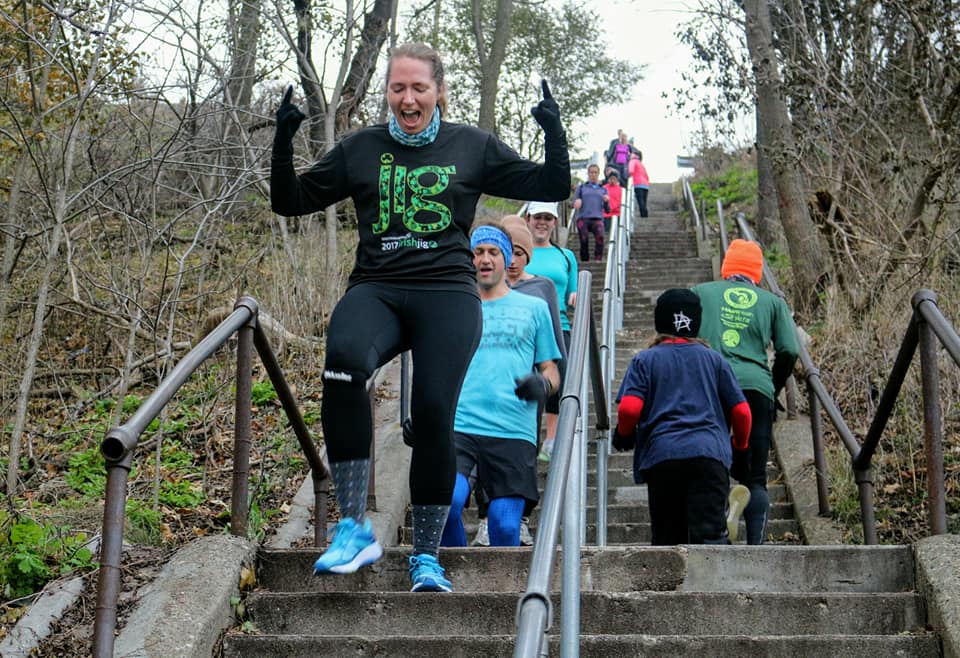 First things first, it’s warming up and the workouts are hotter than ever. Plus, we’re better when we’re all here sweating, hugging, and kicking ass together. So spread the love and bring a friend.

Today’s guest blog comes from the one and only Kelly “Pantsuit” Johnson. Kelly has a smile for days and is always the first to high-five, welcome a new member, and bring positive energy to a tough workout. Word has spread of Kelly’s pantsuit and we are privileged today to hear all about it from the source. 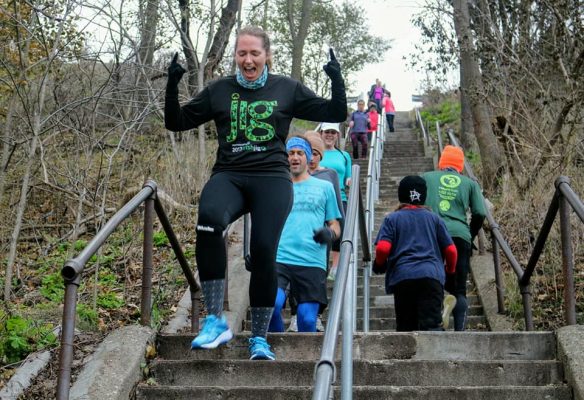 Let me set the stage for you:

It’s 7th grade. I wear my pants up to my belly button (this is before it was trendy to do so) and have an atrociously short haircut (think: perm gone wrong, had to cut it off. Different story, different day). I’m 5’8” so I tower over just about everyone in my class and puberty is taking no prisoners when it comes to my body.

Middle school was not a great time for me (was it for anybody?). I was bullied and had very few friends. Pity aside, I’ve grown from it and it’s made me a better person. And it’s also given me some pretty good life lessons.

One of these life lessons came from when I had the genius idea to buy a new outfit to fit in. Maybe if I dressed up, the other kids would like me and think I was cool. I pitched the new outfit idea to my mom and she was instantly on board (I left out the part about wanting to make friends, but she’s a mom; she knew).

We went to the mecca of good outfits, Kohl’s, and began our search. I should have known this endeavor was destined for failure when we began shopping in the Misses section (I was 12 at the time), but I thought it was cool, so whatever.

And then it happened: the lights went out, the angel chorus was singing, and the spotlight was shining on THE outfit: a 3-piece pinstripe pantsuit. Imagine: bulky shoulder pads, black blazer, pants, and skirt with white pinstripes. It was beautiful and it was my comeback. To pair with the outfit, I, of course, also needed heels (because apparently being 5’8” in 7th grade wasn’t enough?) so we also bought me some BIG clunky heels to accompany the outfit.

The next day, I chose the pant option and a white shirt to complete the outfit. I showed up to school and immediately went and hid in the bathroom. You see, I couldn’t just casually walk in and let people see me. No, I had to make an entrance. I waited for the first bell to ring and listened for the other kids to shuffle into their classrooms. I waited until the last second and then began strutting my stuff down that hallway. I was SO eager to see the looks on my classmates faces when they saw how good I looked. Why wouldn’t they want to be friends with someone who has such a good fashion sense?!

I walked into the classroom and stared to the left, directly into the faces of my peers. I remember, distinctly, that their faces were not quite what I was expecting: tt was more a look of shock and disgust than anything.

Confused, I turned my head to the right to see my teacher….who was wearing the EXACT SAME PINSTRIPE PANTSUIT.

Needless to say, I didn’t make many new friends that day. But, I did learn a valuable lesson in showing up. Regardless of the outcome, I decided to show up that day, pantsuit and all. I was confident in my goal, a little bit nervous, but mostly fueled by a belief in something bigger and better than myself.

I made a decision 10 months ago to #justshowup to this group called November Project GR (back then we were Carpe Diem GR). I didn’t know a single person, I was looking for a new group to run with (literally and metaphorically), and I was on a budget. I showed up the first day feeling very similar to that notorious day in 7th grade: confident in my goal, a little nervous, but mostly fueled by a belief in something bigger and better than myself.

I haven’t stopped showing up since that day and it has completely changed my life. I’ve found deep friendships, roommates (!!), running buddies, and a whole tribe of cheerleaders who are insanely quick to give a high five, Strava kudos, or a big sweaty hug after crushing PR day.

Hesitant to show up? I promise you won’t regret it. Heck, I’d even bring the pantsuit back if that’s what it takes for you to show up. 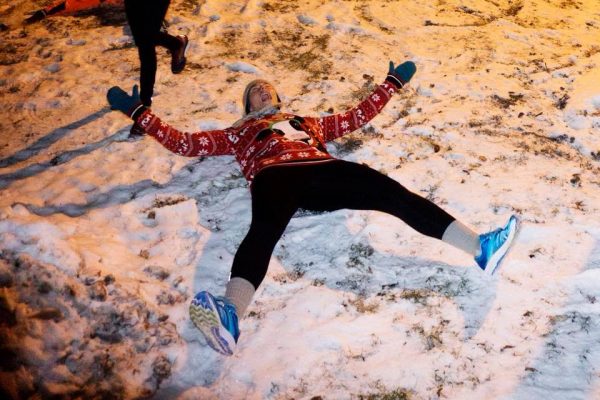 One Reply to “Guest Blog: The Pantsuit Lives On (GR)”