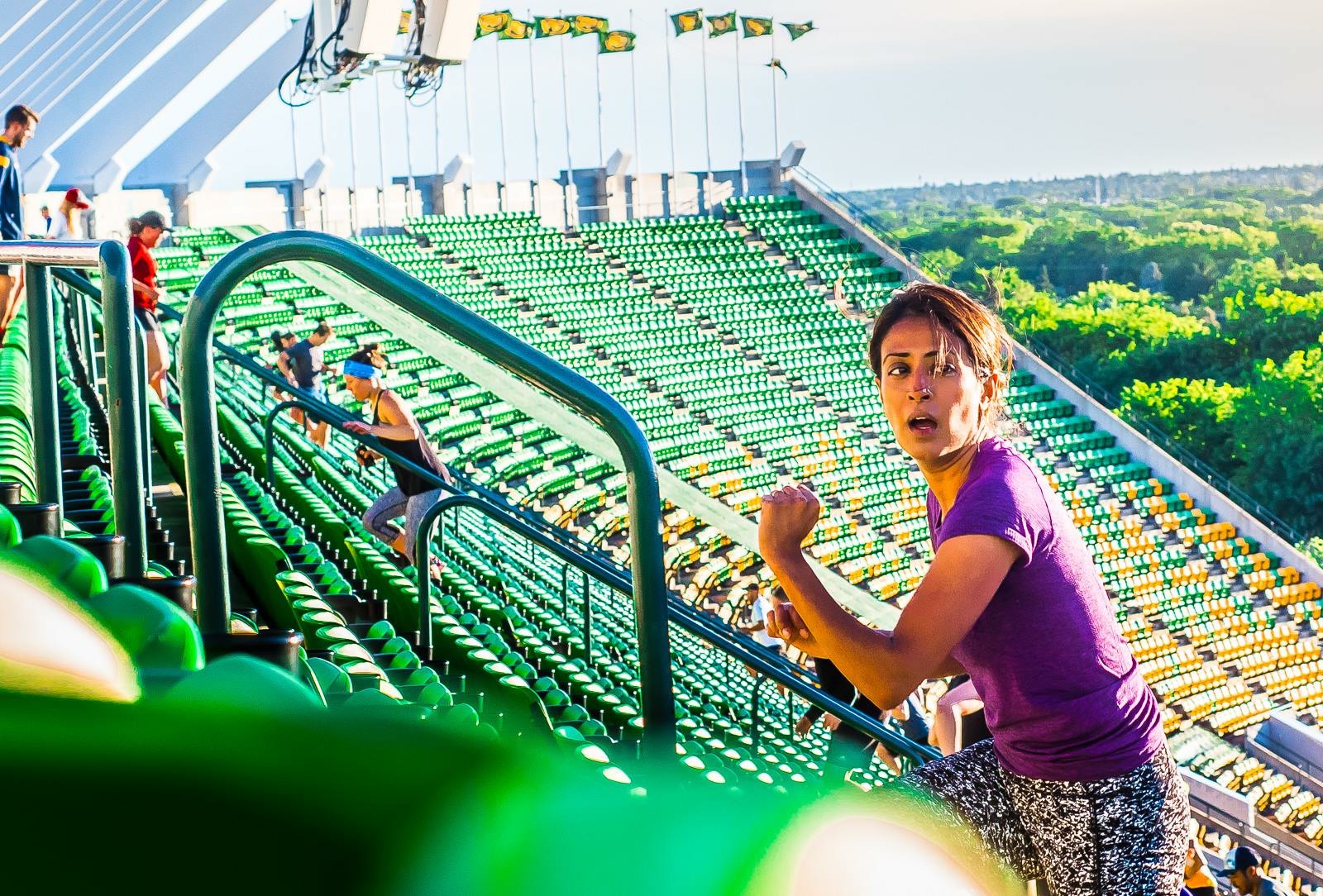 To be honest, I’m not really sure why I started showing up. I had heard about this “weird” group of people who got together in the wee hours of the morning to sweat it out together. Sure. I could try it. Other than a bit of sleep, I really had nothing to lose.

With that little thought, my NP journey started.

My first morning was a summer Wednesday in 2014. We all know what Wednesday’s mean.  Commonwealth. Stairs for breakfast. I had no idea about any of this when I showed up that first day. I walked through the gate, looked around at all of you in your matching spray-painted shirts.  You all started bouncing, screamed “fuck yeah” and then started pounding up those stairs. I joined in.

After that first day, I was hooked!  I told everyone about November Project.

My friends mostly thought I was nuts.  6am? Sweaty hugs from strangers?

What I was immediately drawn to though, was you. Each Monday, Wednesday and Friday, I got a morning high from all your “good jobs”, sweaty hugs, high-fives, nose boops, birthday booms and awkward silent stares (and much more).

I think what I had found was exactly what I was looking for – that real, no-strings attached, unconditional positivity that happens when an awesome group of people have each others’ backs while working towards the same thing. 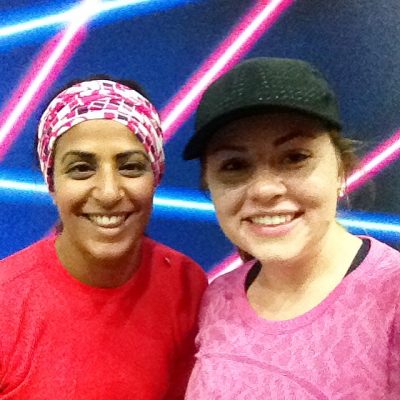 Little did I know at the time but NP, the “weird” group, was about to become a crucial part of my personal journey from that point on. This included some exciting highs and very challenging lows over the past few years…

Just a few months into joining NP, I hit that first low.  I was dealing with some health issues that prevented me from attending regularly. In fact, this kept me away from most types of physical activity. That was hard.  I was away from NP so long that I felt awkward about attempting to come back to such a badass group.  So I stayed away. For months.

During that time, I’d take a look at the blog or twitter and see where you were all meeting and working out. Yes, I kept tabs on you!

Right before the September long weekend in 2015, I thought that I’d suck it up and come back. Maybe the darkness of an early morning in September was a good way to ease back in.  Twitter told me that the tribe was meeting down near Dawson park for the holiday Monday workout. That was as good a day as any to get back to NP.  What could we possibly be doing down by the river though?  Dragon boat racing! After months of being away, I came back to such an amazing day. Dragon boat day. Hard to believe but on that day, the dragon boat race wasn’t what I remembered the most. What was most memorable, was when Nadim saw me. He walked right up, gave me a big hug, smiled and simply said, “welcome back”. A big, unconditional welcome back. 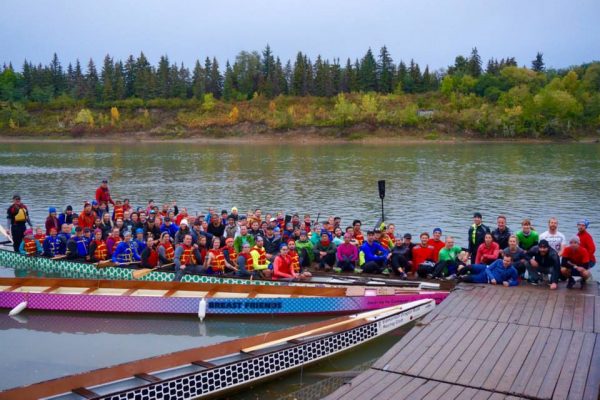 I was back at it. Running hills. Eating stairs for breakfast. Perfecting hoisty-js. I made it a good way through my first winter too. And then, just like that, more health issues. No significant physical activity is what I was told to do (or not do). Again, when I was better, I stayed away for a few months thinking that you wouldn’t accept me back for a second time…

During the summer of 2016, I was doing a radio series on CBC’s Edmonton AM- on Monday mornings.  Right before my segment, Andrew was on air talking hockey. He had an apple in hand and was decked out in grassroots gear. He had just come from Monday’s workout.  He came out of the studio and introduced himself to me. I said hi back and told him that I used to come to NP.  He said, “well come back, we miss you!”  I laughed it off. At the end of my segment, he was still there and, as I left the studio, he turned to me and said, “I’ll see you Wednesday. Stairs.” 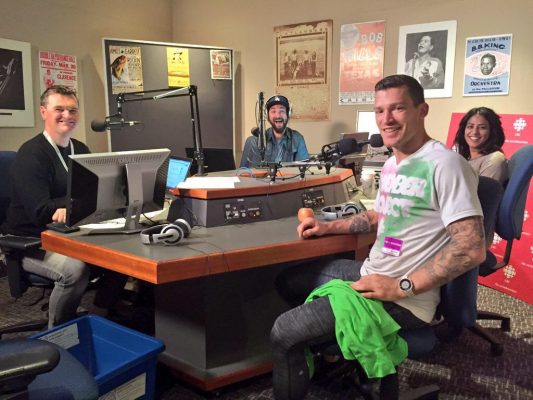 Just like that, I was back at it. This time, I decided that whatever happened, there was no need to disappear for months on end. The tribe would always be there. Just trust in it. 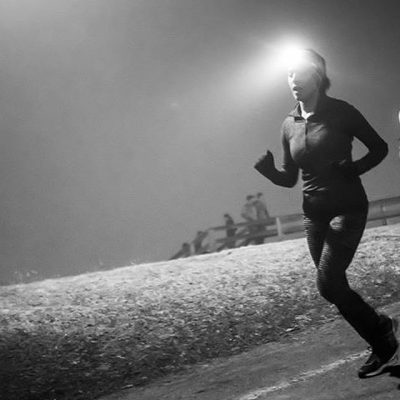 Shortly after coming back, I broke my rib. That didn’t stop me though. Sure, I had to walk the hills and gingerly went up the stairs but I decided to #justshowup.  That same summer, I also had the unfortunate luck of tearing my achilles tendon.  I was a real mess with a taped up leg and a broken rib. Whatever though. 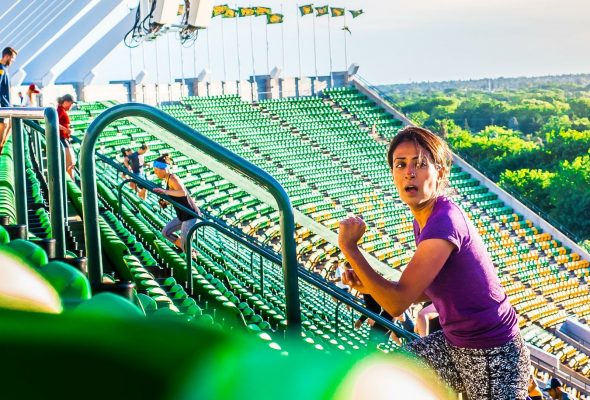 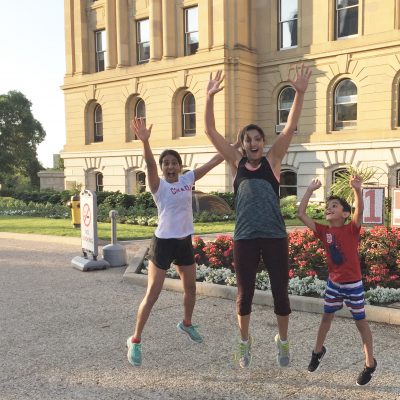 I made it through my first winter that year! It was long, dark and cold but I did it with a lot of help from you. We all know that we’re stronger together, especially at 6am in January. 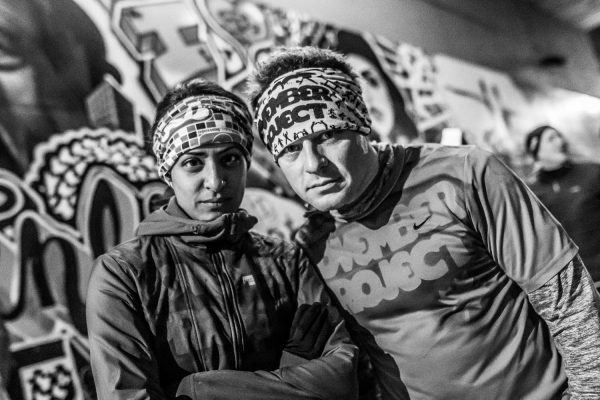 In early 2017, my fitness had really improved and I declared to myself that I would run a marathon that year. I had never declared such a thing to myself before. I had always been an “in moderation” kind of fitness person.

In addition to my regular NP mornings, I thought I should train for a marathon in a bigger way. I had never done this before so I enlisted the help of Shaif, a running guru in Edmonton who owns Achieve Personal Training Studio. When you run with Shaif, he’ll cheer for you, scream at you, hug you, laugh at you, and, most importantly, teach you how to run! Also, I got to meet a whole new crew of experienced and fun-loving runners in Edmonton. 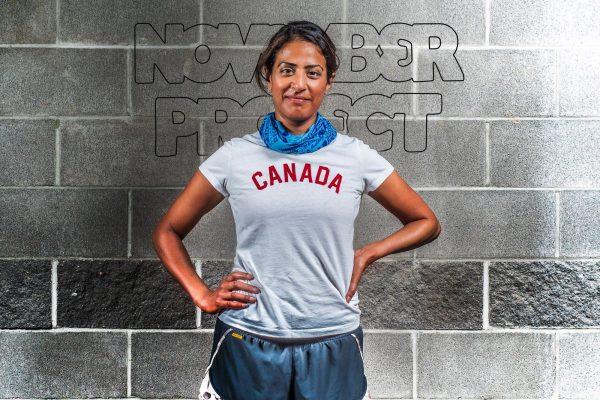 And then, just like that, I couldn’t go any further. I was in pain. My fingers hurt. My knees hurt. My foot hurt. My wrist hurt.  I had never experienced this kind of pain before. I even told some of you about it.  I just didn’t feel like myself. Stupidly though, I just ignored the pain. I kept coming to NP, running with Shaif, lifting weights at the downtown YMCA but truly, I just didn’t feel right.  I couldn’t run, jump or step up anything. In fact, I could barely walk. 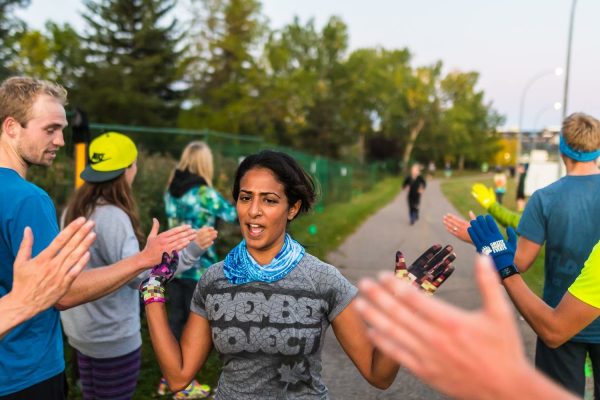 Finally, with a lot of prodding from my wonderful and loving husband, I went to the doctor. After a few weeks, and many tests, I was – very sadly – diagnosed with rheumatoid arthritis (RA), which I quickly learned is an autoimmune disease that causes inflammation in the joints and eventually will cause joint degeneration and deformity. I found this out on a Friday in the summer of 2017. The very next day was the inaugural race for The Relay YEG.

I put on my brave face and showed up that sunny afternoon.  I was pumped to meet my team and get the chance to run with others. It wasn’t about the race but about meeting awesome people.  Unfortunately for me, I ran with a lot of pain in my joints that day. 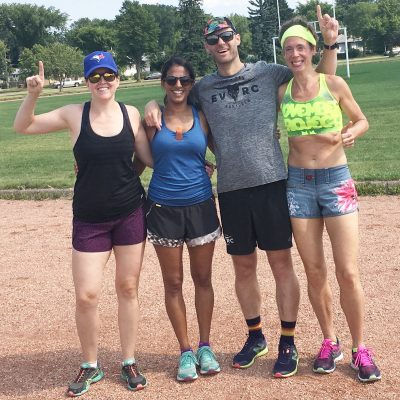 I just simply couldn’t deny it any longer.  I had a real problem.

When I got home later that afternoon, I started googling what RA is and what it could/would mean for me.  I was horrified at what I read. I could end up in a wheelchair? What?! My hands and feet were eventually going to be and look deformed? Huh?!

Not me. I didn’t/don’t want that. That began my obsession of learning as much as I could about this disease and how to manage it for life. I changed my already vegetarian diet to an anti-inflammatory diet. I cut down on wine consumption (waaaah!). I practiced range of motion exercises each morning. I got more sleep. I minimized non-essential stress. I spent more time strengthening the muscles around my joints. Most importantly, I took the medications that were prescribed to me. This was not a joke.

I vowed to myself that none of those horrific, debilitating things would ever happen to me. I wouldn’t let it.

Sadly, I had to put my marathon dream on hold late last year.  Fortunately though, I chose to keep showing up to NP! I’m so grateful that I chose to give myself that time with all of you.  Your energy and determination has been so restorative for me.

I thought that with this new health news, I’d never be able to be outside in the coldest parts of the winter (joint protection is very important now for me), however, slowly but surely, the meds I have to take for life (probably) have started working. I don’t feel any pain in the cold and can pretty much do anything again. 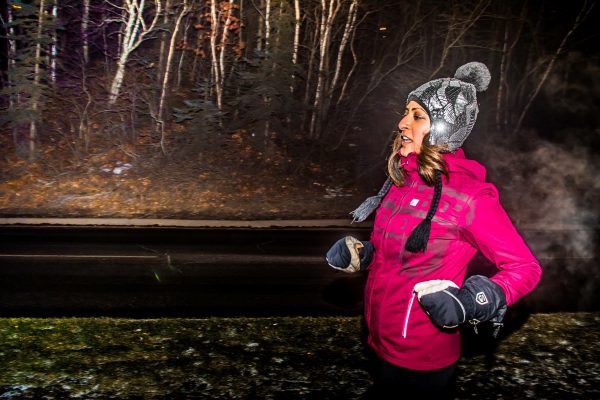 With many of you there, I earned my first -30 badge on the last day of January 2018! I was so excited and proud to receive my badge and, more importantly, a big hug and “well done” from Jen.  She was my biggest cheerleader that morning. 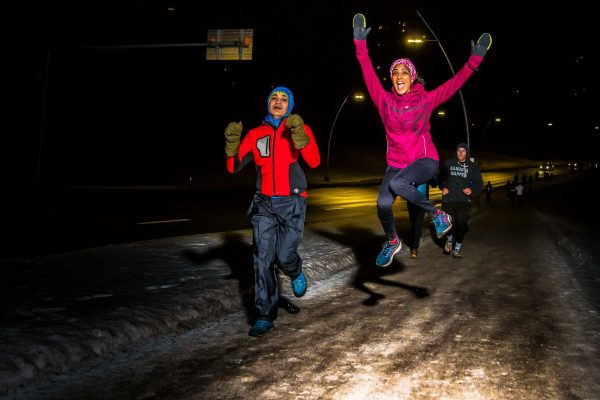 Now that I’m feeling strong again, and think less and less about RA, I have some big goals that I want to achieve this year:

I’m not sure if my body can do it but I’m going to train smart and train hard to get me there. What I now know, that I didn’t really place much emphasis on before, is that running and being active is a privilege. I didn’t realize how much until the events of the last year unfolded the way they did.

What I love about November Project is that when we all get to the bounce, we’re all the same. It doesn’t matter what we brought to the workout. It only matters what happens while we’re one tribe.  Once there, we are all working towards the same goal. Get up that damn hill. And we do it together.

I also love that, through November Project, I get to meet so many great people when visiting other cities. I’ve been to the San Francisco tribe (twice) and the San Diego tribe. Each time, the tribe’s goal was the same. Get up that damn hill (especially in SF!!). 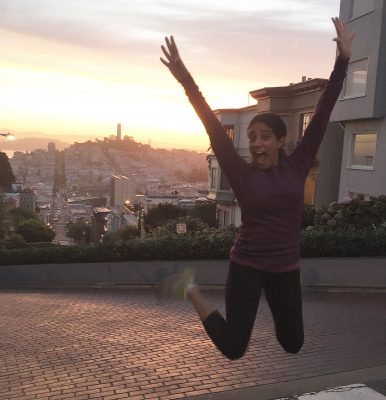 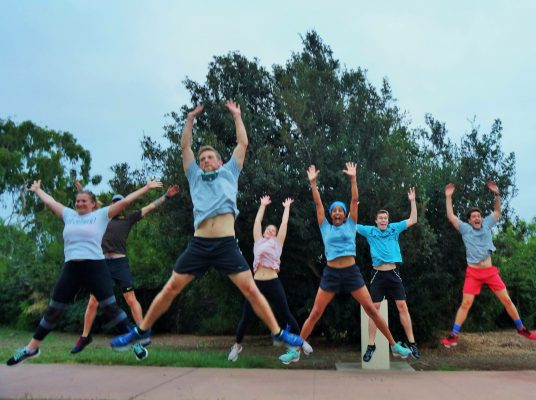 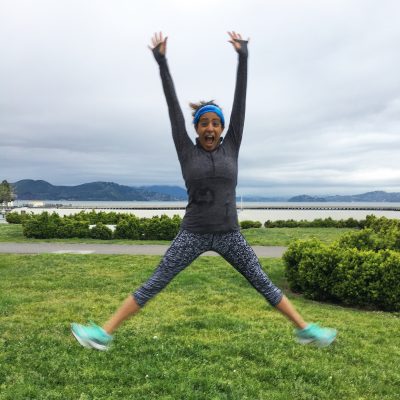 What’s even more awesome is when I spot someone in grassroots gear.  In June 2017, right before running my first half marathon in beautiful Banff, I spotted Gene. He’s from Philadelphia.  I had on a tagged jacket and he had on his buff. It was crazy that we just walked up to each other and said “hi”.  We even got to reconnect after the race for an awesome high five. 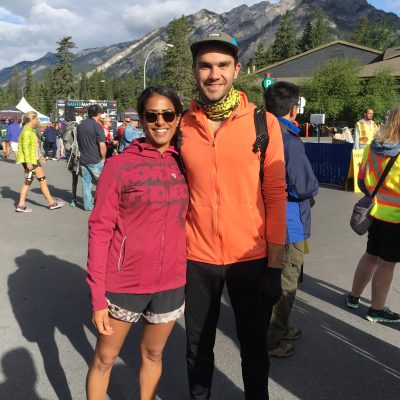 I’m truly grateful for the friendships I’ve formed since coming to NP. Though I’ve been around for a few years now, I’ve disappeared for months at a time and I’m really still just getting to know so many of you.

I guess what the main point of this ramble is that, through thick and thin, NP’s got my back. Once I trusted in it, I have fully realized the power of the tribe.

Whether I personally know you, have high fived you, hugged you (wishing you a great day) or have said “good job” to you, I want you to know that you mean a lot to me. The tribe is an important part of my day, week, month and year. Every. Damn. Time.

I’m thankful I got my butt out of bed that day back in June 2014. I’m glad I came back- both times. Now, I’m grateful and feel privileged to be able to join you each week and cheer you on as well, all working towards the same goal. 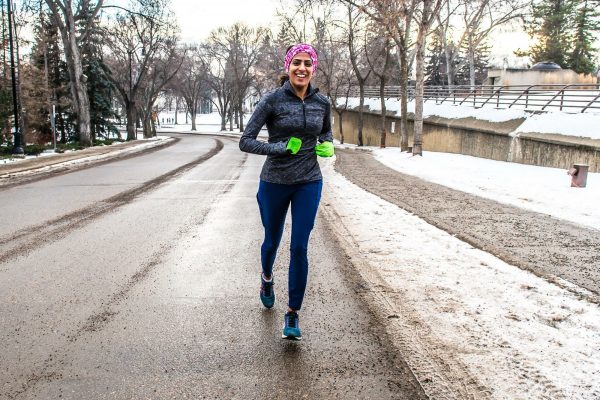 It really is the best effing way to start the day.