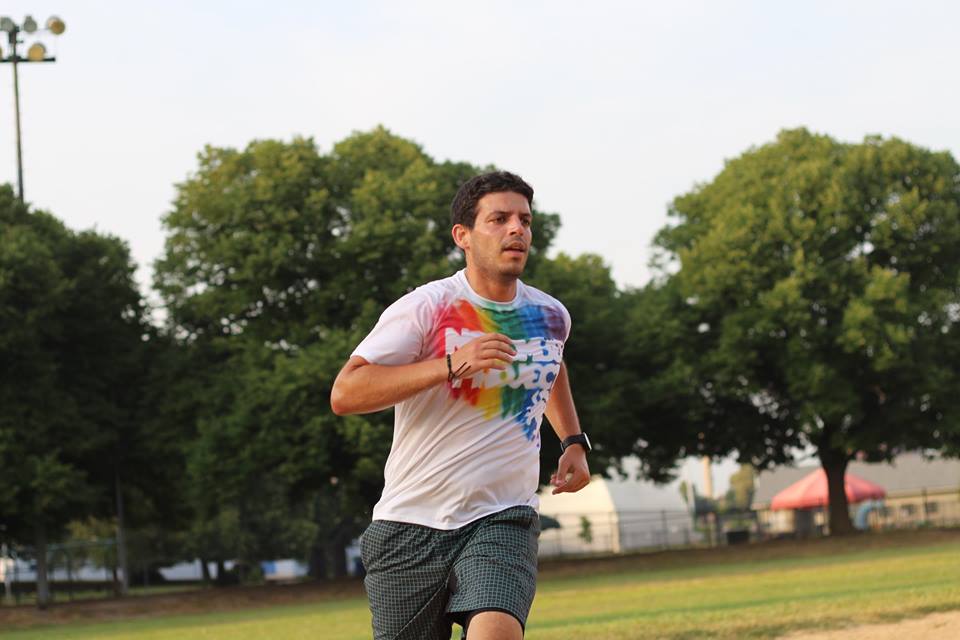 By this point, if you are a member of #NP_BAL, you know Jarrett. He quietly joined the scene and showed up, put this head down, and went to work. Slowly but surely (or maybe all at once and right in your face), Jarrett showed you his true colors: his loud, excited, bright colors ready to shine at a moment’s notice. This kid did not just drink the glass of koolaid in front of him, he made a huge pool filled with the grape stuff and dove in head first. He has embraced everything that NP embodies and he radiates it every single day. His transformation is incredible and he has made dozens of new friends and had extraordinary adventures simply by putting himself out there. If you haven’t had a chance to meet Jarrett, do it. But for now, remember why NP is what it is to you, and read Jarrett’s story:

Coming up with a blog topic is no easy chore. (Kudos to you co-leaders who do this on a regular basis!) That being said, after thinking about it and what November Project has given me, I came up with a few things: enthusiasm, energy, free fitness, confidence, positivity, hugs, traverbals, and the list could go on and on. However, there is one thing that has really stood out to me: friends.

Merriam-Webster defines “friend” as a person who you like and enjoy being with. (*Sydney note: WHAT?! Jarrett? Are we pulling high school graduation speeches here? Okay, fine, go on) I don’t set my alarms for 5:30, 5:45, and 5:56AM because I like waking up before most of Baltimore or because I need to get to work before 9:00AM. To be honest, I don’t wake up that early because I want to get my workout for the day done. I wake up stupid early because I genuinely like and enjoy being with everyone at 6:30AM.

After hitting a year of coming to NP on August 12th, I realized that I’ve met so many new friends at #np_bal, #traverbals, airports, and even in another country (Canada, eh?). Before I know their name, they get a hug. Before I know what they like, we have something in common. Before I know where they are from, we are friends.

NP Summit a few months ago is a shining example of this where it really hit me hard. Thursday night I went out and many people came up to me and said “I don’t know you, tell me about yourself.” That caught me so off guard because it just doesn’t happen in the real world. People are glued to their phones, have earbuds in, and are in a hurry to get somewhere. Instead of the safety of talking to people you already know, everyone was more interested in meeting new strangers friends. I loved it.

I found my relay team (shout-out Chug Life: An Ode to 6Pac) through a google doc and saw there was one spot open and the team name. I knew that was my team. Little did I know the team included someone from the Fort Collins pledge tribe and two Vancouver-ites and that we would have an absolute blast constantly sending pictures of ourselves drinking beers claiming to be “training.”

With the NP Olympics, I stepped way out of my comfort zone for 8 other friends I have never met before and agreed to grow a mustache. I was so uncomfortable and felt like the biggest idiot, but when I got to the ballroom, there was Magnum PIsle waiting for me all in Hawaiian style shirts, incredibly short shorts, and (creepy) mustaches. We may have been impressively bad at every single event, but our dance fucking killed it.

Rambling aside, the point is that NP is all about friends. Whether you know it or not, or even whether you like it or not, it’s physically impossible to show up, get your workout, and leave without making a new friend. You can try your hardest, but that shit just ain’t happening so get over it. You keep coming back each week because you like and enjoy being around the people in November Project. So set your alarm for a stupid early time, hug a new and old friend, travel to another city for a workout, and who knows, you may even win a 1st place bush in the process.

You may not have met everyone yet… but little do you know that you’re already friends.