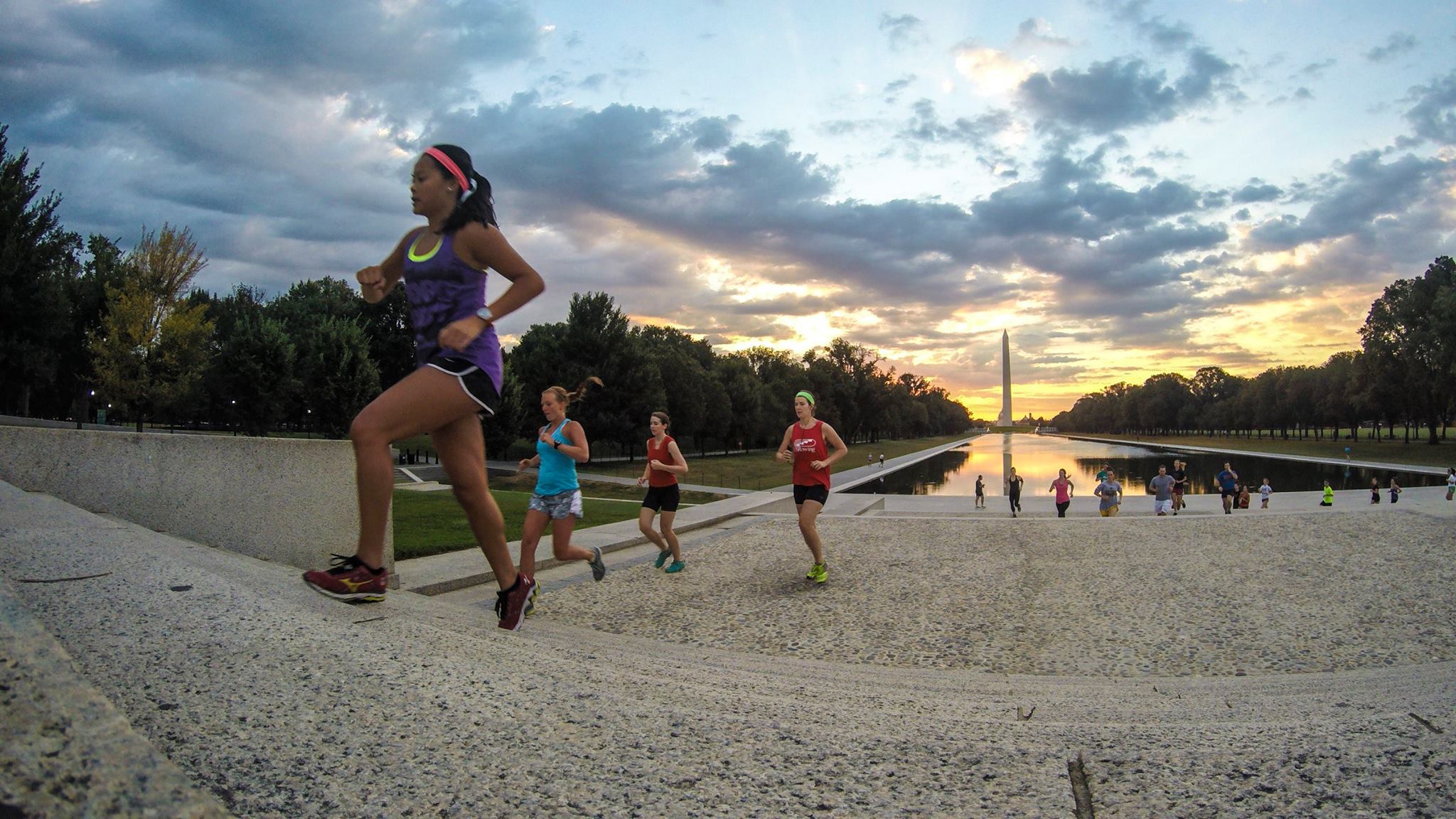 Ok, I lied in the FB post. We won’t discuss what Wednesdays would be without November Project. That would be sad (and any other synonym of the word). Instead, we’ll hear from our reporter in the field. Christine, take it away:

When I arrived to Washington, DC at The Catholic University of America, I was 18 years old and very excited to be on my own after being raised by two very strict parents.  I began pulling all-nighters, drinking excessively, weeping after pole-vault practice, and saying “I’m good” on autopilot as people continually asked “How are you?”  I was unhappy and on the verge of transferring school’s because I felt overwhelmed with the constant need to be involved and didn’t exactly admire the city after my belongings were stolen from me at Union Station.  Instead, I ended up quitting the women’s track team because I didn’t feel apart of a unified team as I did in high school. A team that holds each other accountable and encourages each other to be better.  It wasn’t until junior year (November 2014) where I discovered 200+ people running up and down the Lincoln Memorial during a bike ride with my NP buddy, Kara.  This is where I truly began to appreciate everything DC has to offer.

Everyone acknowledges Washington, DC as an international center of politics, business and culture, but I tend to associate DC with the excess of FREE things to do in the city.  Being a rather poor college student, I became obsessed with the idea of #FreeFitness that November Project offers.  I’ve never really been a long distance runner, but I was surprised to find myself going for runs almost every Monday, Wednesday, and Friday just to explore DC.  This worked perfectly with NP_DC’s Friday destination workouts because it gave me the opportunity to explore a different neighborhood each week.  This soon became a thing with my accountabilibuddy’s: To run or bike to NP, learn stranger’s names while doing partner push-ups, then to eat noms at a neighborhood breakfast joint.

I’m inspired by those who do double workouts (5:30am and 6:30am), those who train for marathons and triathlons, and those who motivate me to keep going when my legs give out. All of these motivators have helped create a happier college experience.  In addition, I found to make things more rewarding by asking myself “what do I want to do today?” instead of “what do I have to do today?”  My goals soon aligned with my desires.  I wanted to get up at 4:32am because I like to see friends at the 5:30am workout at the Lincoln Memorial.  I wanted to go out to fine drinking establishments with my roommates till 2am, but I also really wanted to bike to the Friday workout at the National Zoo 4 hours later. It’s the feeling I get after a workout or finishing my 17th Lincoln log and seeing a herd of strangers cheering my name that encourages me to come back every Monday, Wednesday, and Friday.

Most college students in the city feel confined to the metro system and don’t always take the chance to break out of the campus bubble.  If it wasn’t for November Project, I would have never voluntarily ventured out to Congressional Cemetery in Southeast DC to then discover the best bagels at Bull Frog. Nor, would I have run 6 miles to Mitchell Park to then see a perfect sunrise while doing bur-pees under the Spanish Steps in North Dupont. So, I’m challenging all undergrads in DC to #JustShowUp.  It’s not just the small things about this incredible city and welcoming community of fitness freaks that have made DC my home, but also the sense of accountability that I began to apply to other aspects of my life.

Looking back two years ago, I don’t think I could have predicted where I would be now. That I would have finished my very first marathon and would be running my third half-marathon next month. And that I would have explored almost every block of Washington, DC by foot or bike with hundreds of crazy loving people.  Thanks to November Project DC- I appreciate every park, neighborhood, breakfast joint, and human being that helped create this vibrant community.

Holla at us FRIDAY (check the tracker for location). We’ll be live streaming again (because we can).

Ride wit’ us Monday as we have #HillsForBreakfast. Last Monday of the month means Capitol Hill.