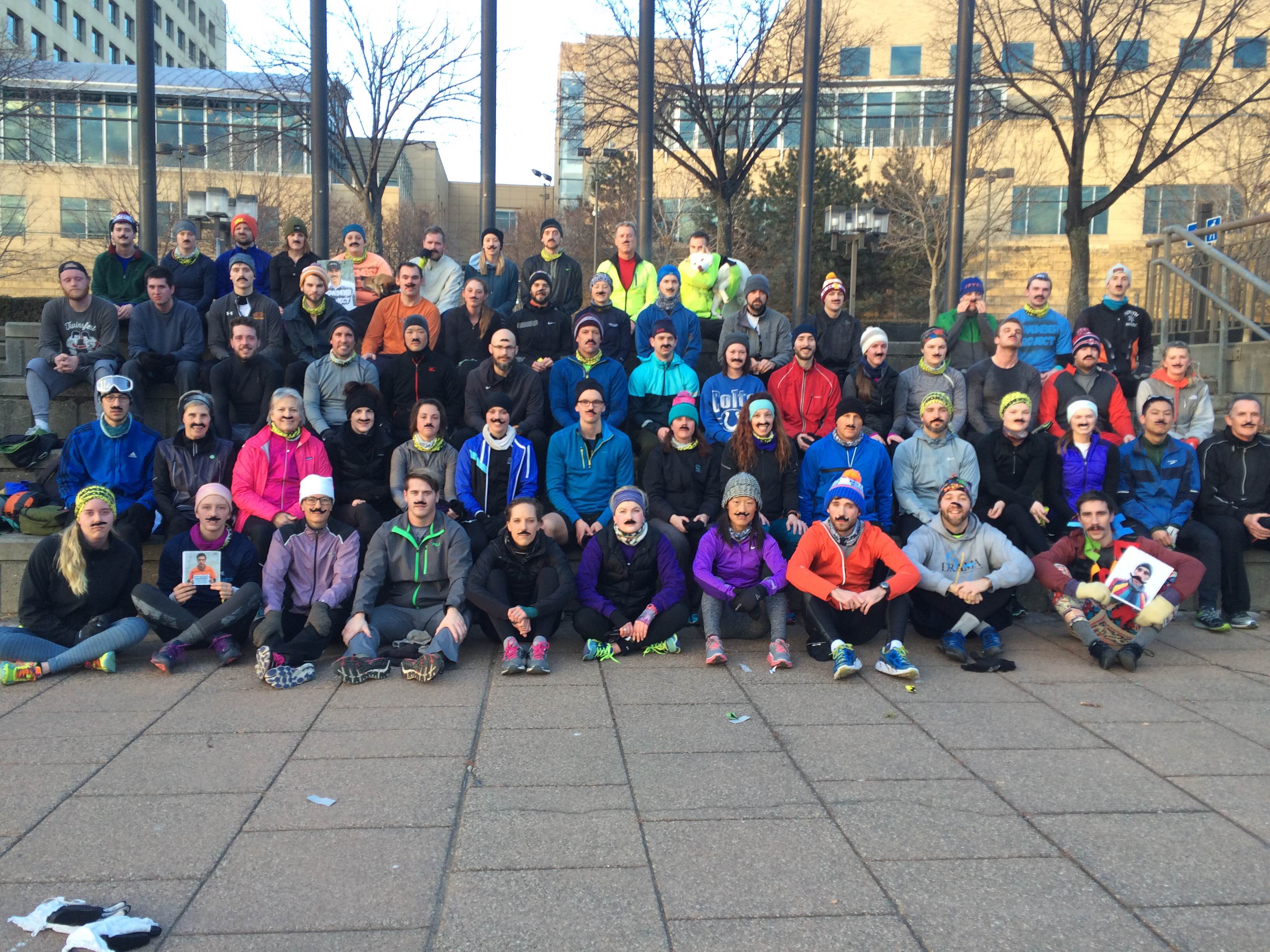 Before we begin I mustache you a question..HA! you see what I did there? :p

Even though the temp was back in the teens after a wonderful weekend of 50/60 degree weather, we had quite the crowd. We started with a quick circle-up, a bumper-boat bounce, and then we took off up river to do one of our famous and tough workouts.

This morning we brought back the “Bridgewater.” You would think this workout was cleverly named after Teddy Bridgewater. We may have told you that during previous workouts but really, the workout was actually simply named because of what you do during the workout. Starting down by the river’s edge, you hoist yourself over the 3-4 ft concrete wall and sprint down river to the Hennepin bridge where you climb the stairs, run around the pillar at the top, and then sprint back to the river’s edge. See? bridge…water..creative, right? After we got back to the river’s edge, we had the option of picking up either a plastic dino/tree/rock that would be used to create a dino domain at the top of the bridge, or a stick on mustache to be collected on the platform at the top of the ledge we climbed over. If a dino was grabbed, we had to make our best dino “ROAR!” If a mustache was grabbed, we had to yell “F*CK YEAH!” Before sprinting back to the bridge to begin another rep, we did 2, 4, 6, etc… box jumps (or step ups) and push-ups (or dips) increasing the number by 2 after every completed bridge water rep. ~25 minutes of this was completed and ended with the ring of a cowbell.

Oh yeah,  there were cut-outs of Ben’s face floating around too. When you were passed one of these “Burpee Ben’s”, you had to immediately drop and do 5 burpees.

The last 4-5 minutes were devoted to burpees. 24 of them to be precise. Or until Ben did 24. Why 24 you ask? Today is Co-Leader Ben’s 24th Birthday, gotta make him work for it. Why mustaches? Do you see the wicked stache on Bauch’s face? We outta match that on today of all days.

Overall, today was fantastic. Ben was surprised by the crowd, the mustaches, the “Burpee Ben’s”, 24 burpee finally. Way to go tribe!