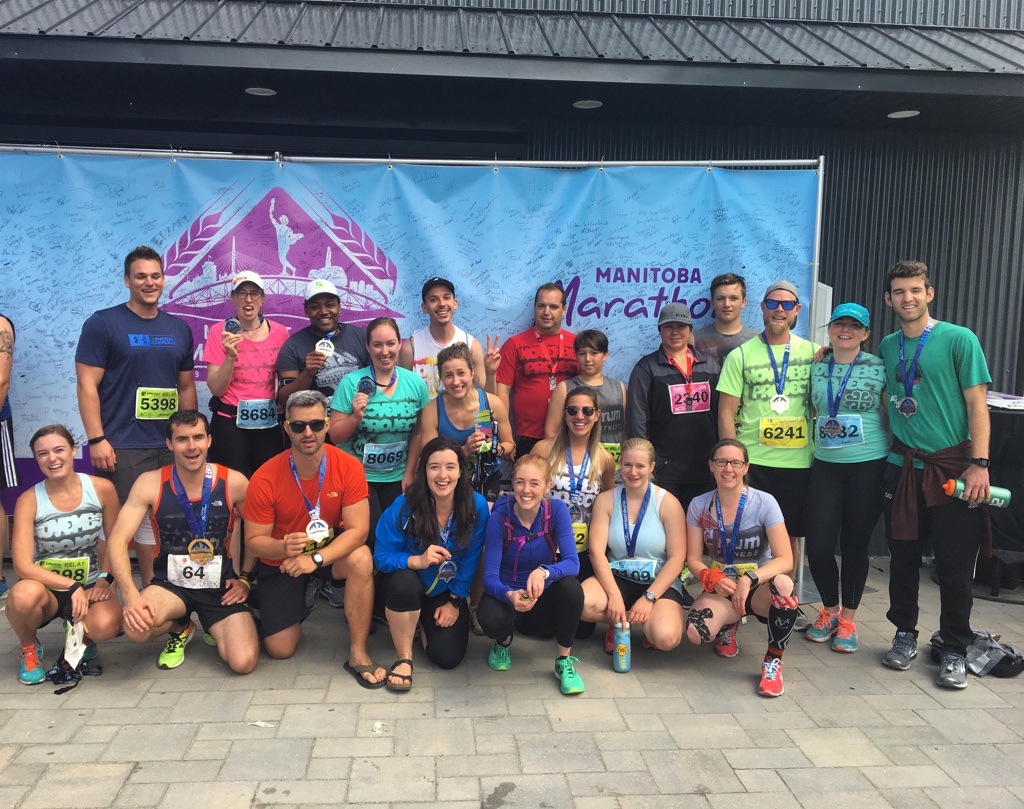 This weekend was the Manitoba Marathon. I wanted to share some stories from this race and from the history of the event here in Manitoba. I had the inspiration to do a little research into it after I heard a funny story from Leilani on Saturday. She’s been on the organizing committee for the Marathon for some time (she was the chair of the committee for a few years) and lately she’s been crewing the aid station at Mile 14. So I was dropping some race fuel off to her to have at the station for when I came through there, and that’s when she shared some history from the inaugural race, which gave me a good laugh.

Here’s how she explained it to me. For the first Manitoba Marathon (officially called Manitoba Marathon for the Mentally Retarded, terminology has changed since then), they only had the one race; the full marathon. There were no other distances you could choose to do. This was at a time when not a lot of people really knew what running a marathon really consisted of and there was a lot of hype going into it. They had more than 4,000 people sign up for it, and only 1,588 finished. That is a 60 percent DNF rate. It sounded like absolute carnage. The race started at 8am (instead of 7am like it does now) so it must have been really hot.

The race started and finished at the old Bomber Stadium, and it was pretty much an out and back to Headingly, which doesn’t offer much shelter. I laughed even harder when I watched this video:

Everything about this video is awesome; the thousands of participants, the commentary, the wording on the old certificates and the interview with the kid at the end.

And then I laughed some more when I saw this old photo gallery from the Free Press Archives:

Needless to say, the race has changed drastically in forty years, but this weekend was a good tribute to all of those that were there in the beginning; those that raced it and those that organized it. At the race expo on Saturday, there was a display organized by a man who has raced the full for all forty years, Len Rolfson. He had huge scrap books made from all the races, and he had created a quilt of the 40 race shirts, one from each race.

They had also invited as many people as they could muster up who had run in the original Marathon, and they all received great 70’s style t-shirts and took a big group picture. After the pic, Rachel (the race director) asked how many would be running the next day, and most of them put their hands up. It was incredibly inspiring to see. I knew one of the guys who ran the first race, but I noticed he looked a lot younger than the rest of the group. So I asked him, and he told me he ran it when he was 14 years old, in K-mart shoes. There was no fancy active wear back then.

After seeing all this, Megan probably doesn’t feel as bad about her bonk. Unfortunately, if you get sick two weeks out from race day (which she did), you’re not going to have a great race. We were both training hard and aiming for that Boston Qualifier, but that will have to wait for another day.

There was a great big crew of NPer’s out racing and cheering this Sunday. There was a couple relay teams, a lot of half marathoners, some 10 k’s, and a few full marathoners. It was wonderful to see the positivity and support out there. Megan powered through and finished under four hours, which is still an impressive time, if not a PB.

I ran my fastest marathon to date, and I really believe it comes from the accountability of November Project. Back in the winter we had that one workout where we shared our goals during the plank circle, and I think by putting voice to your goals, you are that much more likely to work towards them. I missed my goal time by 2.5 minutes, but I still took 12 minutes off my last PB, so I’m still happy with it. In my opinion, if you’re easily achieving your goals, then you’re just ticking off items on a to-do list. Set the goals high, and even if it takes a few years to hit it, it’ll be that much more rewarding. Maybe I’ll never get that BQ, but it won’t be for a lack of effort. Thanks tribe, for pushing me to run faster harder longer (stronger?). Cue the daft punk.

Dom lead the Cheer Station at Mile 10/23, and that was probably the most important cheer station on the course. We had a few people commenting on how much it helped them get through the last 3 miles of their race. That section through wildwood is tough. There aren’t too many people cheering, and it gets really hot and sticky in there. When I was at 21 miles, I told myself ‘K, two miles to the cheer station, then you’ll be fired up to run the last three, you’ve got this’. So thank you to everyone who came and cheered their hearts and lungs out for five hours. I’m glad you’re here. 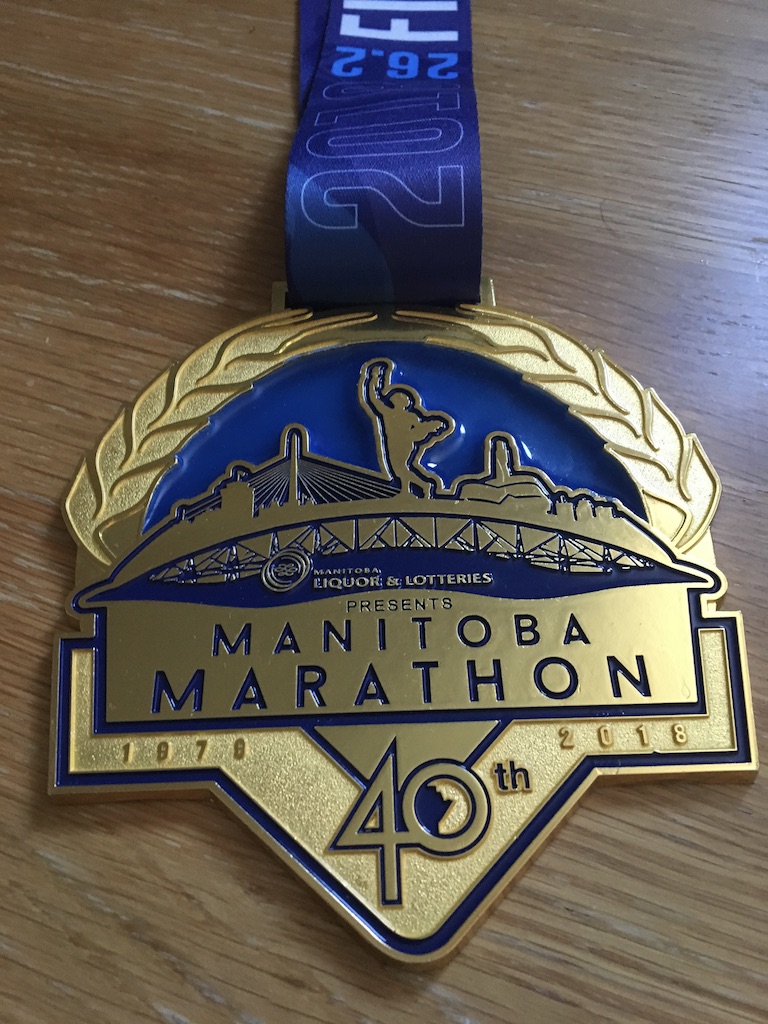 Today we handed the Positivity Award (not the Shabooya, after 3.5 years of coming to NP I don’t know how I messed that up) to none other than Marc with the incredibly long last name. We will call him Yoga Marc. Marc’s been showing up since the winter, and I don’t think he has missed a Wednesday. He brings the biggest smile and the best effort. In the fall, I asked him if he’d be willing to put on yoga classes on Friday mornings for the tribe (for cheap) and he happily obliged. His yoga studio was voted the best in Winnipeg last year, and it was great having those classes all winter long. Well done Marc! Again, I’m glad you’re here. 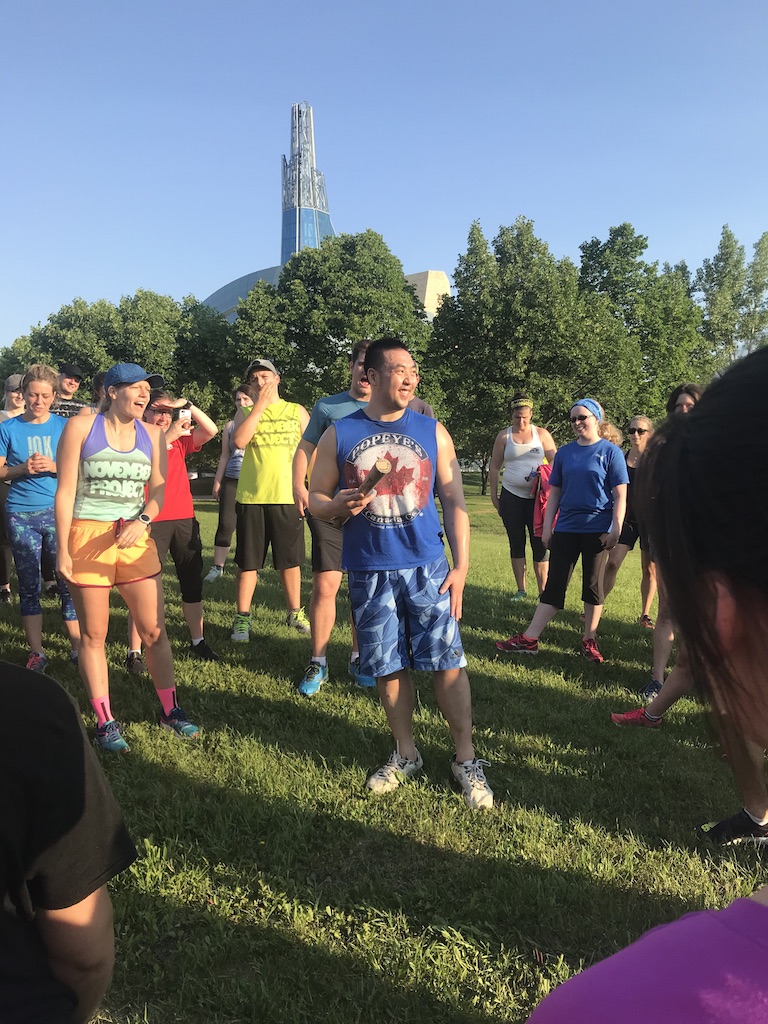 Megan’s brainchild. It’s a great event, a timed scavenger hunt around the city. Tomorrow night, it starts at 7:14pm sharp, so if you don’t have a team of three yet, show up early and we’ll find you one. Wear your running shoes, because you’ll be running, and bring your drinking shirt, cause you’ll be drinking beers after (if that’s your thing, no pressure).

This Friday, it will be the first of three Sunrise 6k’s we will be running this summer. The other two will be the last Friday of July and August. Try to beat your time each time you race it. Start and finish at the Legislative Building. Race starts at 6:14am sharp, don’t be late. We will have the big deck of cards for those that would rather do a deck workout.

Ok, that’s all folks. Keep recruiting new people this summer! And keep setting your goals high. Congrats again to everyone that raced this weekend, you all inspire me.