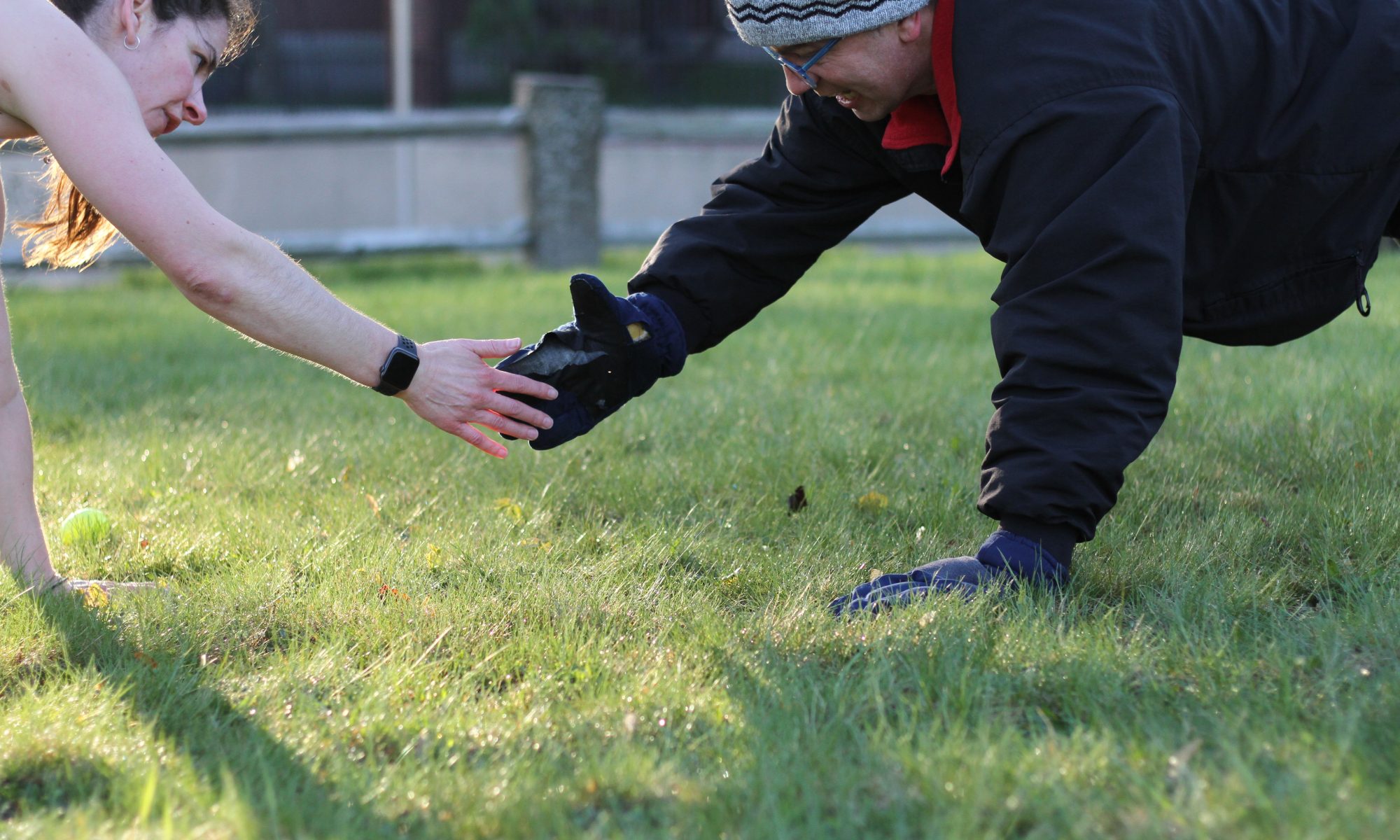 Today’s Monday #DestinationDeck workout was a good one. A nice sunny, albeit brisk, morning, in a centrally-located spot, with a great big flagpole and whole bunch of pastel colored plastic eggs. There were newbies who showed up. There were people who’ve never ever been to a Monday workout before who showed up. And there were a few folks from out of town and WAY out of town who managed to make it to the workout. BOOM.

Before the workout started, I noticed the thing that usually happens right in those few moments–which was people arriving and grouping up, but also standing separately, independently, by themselves, and just waiting for the workout to start. I went toward as many of those solo humans as I could in those 2 minutes, introducing myself, asking if I could give them hugs, and welcoming them to NP Boston. You know what I realized?

I don’t do that enough.

Granted on many Mondays, I’m heads-in with Capozzi as we’re locking down final details for the workout during those moments, and with him out of town today, we weren’t doing that. But no matter what, part of what I believe is the truly good stuff of NP is showing up and learning someone’s name–meeting someone new–even figuring out that someone totally isn’t new to NP, I’ve just never seen them or met them before. And maybe one of those people becomes my partner at some point in the workout. Maybe it’s simply an opportunity for me to stretch beyond my comfy handful of people I talk to every single time I’m at a workout, and to see about adding to that handful, or purely learning a little bit about someone else that makes me ask a new question or that exposes me to someone/something I don’t typically experience. This is the stuff of living, in my opinion–and I think I don’t do it enough.

I think it takes a little more energy to make that introduction, to have that conversation, or to put myself out there, than to just keep doing what I normally do. It is technically easier most days to just not have that interaction with someone else. After all, it’s early, we’re all a little tired and maybe not even awake enough to talk. But I think I can do that more, and I have an intention to do that after this morning.

I had a conversation this morning with a frequent and regular member of NP_BOS and we were discussing the idea of the “We Missed You*” post that really started when NP was no bigger than a group that could communicate easily and effectively with a text thread that everyone was on. And that kind of small-group-ness and intimacy that a hard-working community of fitness-loving people has, is one that can totally embrace the friendly banter of “where were YOU this morning…couldn’t drag yourself out of bed?!” and such inside jokes and made-up stories about how friends were spending their time that might prevent them from showing up to the workout that everyone valued so deeply. And how that culture of deeply caring about holding each other accountable —because that’s what everyone really wanted and needed– was balanced with a sense of humor and creativity. And how that worked really well when everyone was close, everyone actually knew everyone, and everyone was into that same vibe. But we also talked about how that doesn’t fit so well with how NP is now and how NP really hopes & intends to serve people: by being a really fun, supportive, community-building fitness movement.

So I wonder if we look and move forward by doing a couple of things. The first, I believe has already happened quite organically just as the greater community of NP has grown beyond one city, and way way way beyond one small group of friends who all know each other super well–we just do a lot less of the “We Missed You” calling out. And the second, is to take action in the other direction, which seems to possibly serve the growth and culture of NP that it is clear everyone values–we do a lot more of the “I’m Glad You Were There” calling out.

Who says the only way for someone to be “seen” at a workout is by making it into a photograph that the co-leaders take and post on IG or in the Facebook album for the day? What if, instead, each and every one of us who shows up focuses on the community around us who are actively making our workout better because of their presence, their effort, their positivity, or their contribution in some way? What if we each choose to work hard and get the most out of the workout we showed up for, but also choose to strengthen others by seeing them and their hard work–and by assessing hard work not only by overall speed or number of repetitions, but universally by effort, persistence, grit, taking risks, and pushing beyond preconceived limits??

What if we started to actually focus more on who WAS at the workout than on who wasn’t. Let’s be clear though, we still care about those important members of the community who maybe didn’t show up for reasons important to them. (We definitely care about you when you’re not there, and we DO miss you–and we just prefer that you’re healthy, rested, motivated, and excited about showing up…and therefore you show up!) But if we’re going to use our voices to call out fellow fitness-loving members of this powerful community, why not use our voices, and our social media platforms, to shout out those who are positively impacting us because they were there?!?

I propose we start using this hashtag, and start making simple IG stories/posts about the specific humans who made our workout/day/us better because they were there. Let’s be posting photos of those great people on our FB page or on their FB page, start tweeting about them, and keep growing this movement by building each other up, rather than approaching our support and accountability through a lens of pressure, judgment, or even worse, of shame.

However it is that things have been done in the past, let’s decide now to focus on how we want to be and build that going forward. And it’s as simple as this.

I believe this is how we best build community, accountability, and the kind of movement that we all believe in and want to be a part of.

NEXT MONDAY 5/6 @ 6:29am we will be meeting outside the Whole Foods near Symphony. Exact map right HERE.

KEEP SAVING THE DATE for Memorial Day Monday workout 5/27 which will be something special, somewhere special, and we will give you more details for planning soon, but just get excited about what is to come!

*If you’re not already familiar with the “We Missed You” posts, see the entire archive of “We Missed You” blog posts left for friends who promised to show up, and then didn’t…