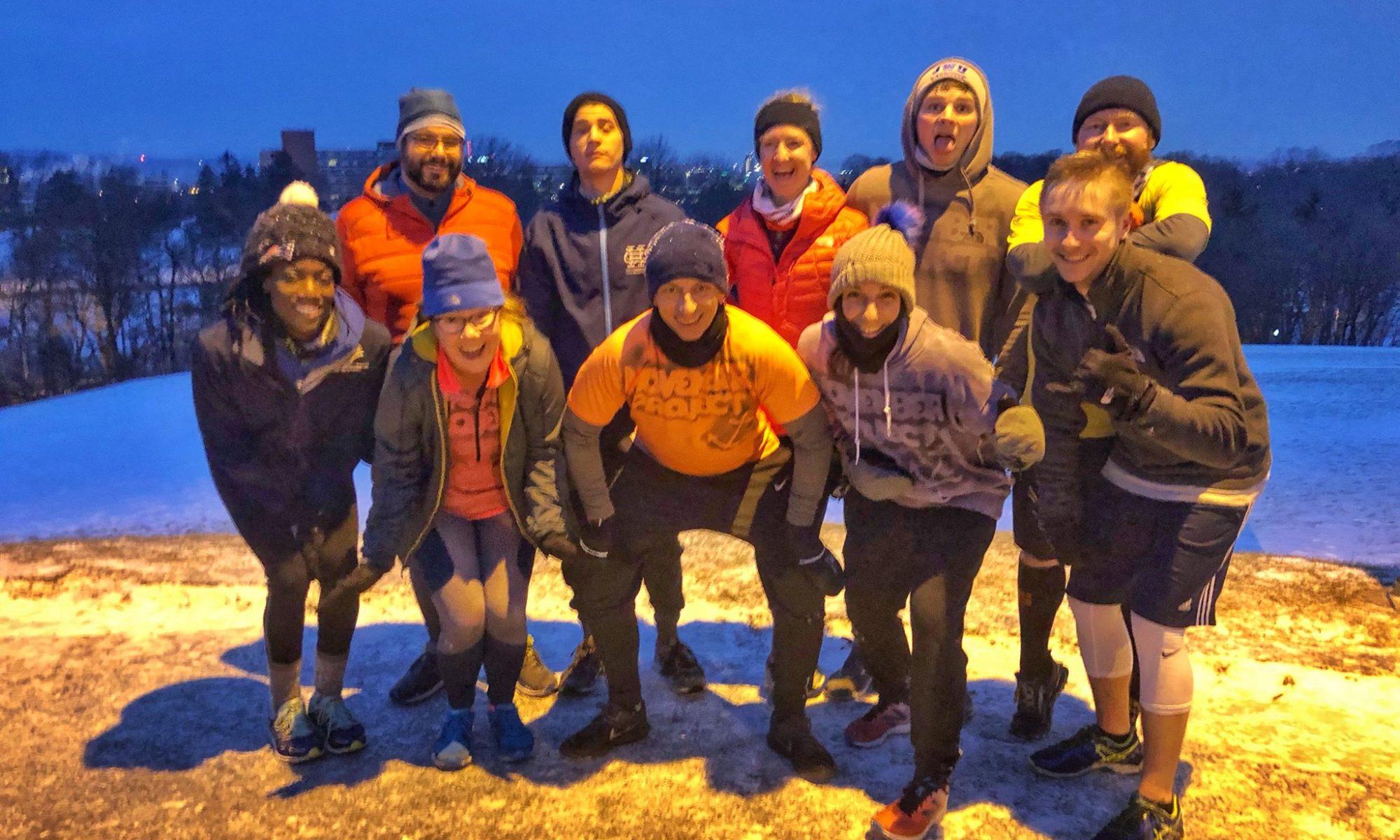 This past weekend, the amazing humans of Syracuse, NY, and November Project Syracuse, played host to November Project tribe members from all over the US and Canada (including a crew from NP Orlando, who experienced snow for the first time.)

To say Snow Globe was an incredible time would be an understatement. The planning and logistics for this event, put together by tribe leaders from Syracuse, Toronto, Buffalo, and Montreal was nothing short of perfect, and every single person who attended left with a greater sense of community, and a lifetime of stories to share with people.

This week, we’ve asked Jill Parrett to guest blog for us, and tell of her experiences in Central New York.

I am not a risk-taker by nature, so much so that a big part of my career is figuring out all the ways someone can get hurt. (Safety is FIRST, despite the commonly-given words of our November Project Providence co-leader Steve Blais.) This doesn’t just apply to physical risks for me, but also socially.  I might be able to convince myself to #justshowup, but boy, it takes a lot of moxie for me to do that, and even if I do, I’m most likely to be found awkwardly standing at the edges of a crowd and smiling nervously. But a perennial resolution for me has been to “Always do what you are afraid to do” (thanks to Emerson for that one!).  Those are the words that got me to PVD Project during November Project pledging, and why I hit “Interested” on the Snowglobe Facebook Event. A big meetup of enthusiastic and athletic tribes from all over the US and Canada sure scared me, though!

That click got me caught up in the tidal wave of co-leader Holly Bubier, who spearheaded the logistics of getting 10 November Project Providence tribe members the 4.5 hours to Syracuse, New York in January and finding us a place for the weekend. The “Interested” soon became a “Going,” because one simply does not say “no” to Holly! But I was definitely nervous.

November Project Syracuse had quite the itinerary planned for us – a mix of workouts and social events spread around the city. At every event, we were told “We’re glad you’re here!” and it was obvious they meant that. We were welcomed with open arms (or high-fives, if that’s your thing).  People who are passionate about their city and their group jumped at the chance to make all of us feel like part of their tribe. A welcome event at a local bar on Thursday night was a nice prelude to Friday’s workout. I’ll never forget watching a member of the November Project Orlando tribe do her first snow angel IN HER WHOLE LIFE! Her face was the best mixture of joy, wonder, and regret.

Friday morning at 6:15 was a little brisk! We all met at the lovely brick water tower at Thornden Park.  As you might gather, it was at the top of a significant hill – with the views, and wind, that go along with that. But the hugs and high-fives were warm, and the energy level of the bounce was out-of-this-world! It was a super fun workout – Rock, Paper, Scissors; sit-ups on the ice; “I’m a Jellyfish!” burpees. I’m not sure if you know, but running down a hill through fresh, powdery snow feels a lot like you’re in an episode of Baywatch…with a few extra layers, of course! It was all the best stuff about November Project – a workout with fun, silliness, community, and encouragement.  I think this was the point where I started to truly feel like our mighty Providence tribe is part of something so much bigger and so awesome!

More camaraderie and winter fun were on the schedule for later Friday, our hosts arranged for a special snow tubing session.  I had forgotten how fun barreling down a hill in the snow on a tube can be – we were like little kids up there. There was definitely show-boating going on and some fierce competition down the hill. I was very grateful to have a tow line up the hill; I definitely expected there to be some uphill running during this event, so I was pleasantly surprised to avoid the typical NP torture!

We finished the full Friday with a hockey game at the local affiliate, the Syracuse Crunch – with an impressive amount of pre- and post-gaming.  It always strikes me as a little ironic how much fitness folks like to tie one on, but I’m definitely not complaining.

For me, Saturday morning’s workout was the highlight of the weekend.  I’m still in awe of how much planning must have gone into our Scavenger Hunt Run! Teams of four, each containing a NP Syracuse member, were given some really crappy maps.  Our task was to find five of the six locations and perform our little tribute to the Barkley Marathons by getting a book page of a unique number from each and race them back to the base – plus a bonus picture with Winston the Insta-famous Great Pyrenees at one of the stops! So as a super awkward and shy person, I was kind of dreading finding a team.  I’m always worried about holding people back with my turtle-y pace, too. But I got lucky right away when I was approached by a member of the Ottawa Tribe. I realized just how lucky I was when I got to know my team! We had a ball! It was awesome to learn about my team (two Ottawa guys and a Syracuse guy) and get to see the city. We definitely went to some areas that probably aren’t on any tourist map, but that’s how I like it!  I want to see the real parts of places I visit. It made me see lots of similarities with Providence, with the cool architecture and gritty parts. We sure didn’t win, but it was awesome!

Our last official event was a social one – the party at the Rail Line.  It had been snowing for hours by the time we headed to dinner and to the party.  We had lots of discussions about avoiding the snow and heading home, but most of the crew stuck it out.  Walking the empty streets of downtown Syracuse with the snow falling was surreal and the perfect “snowglobe” effect for the weekend.  The party was a blast! You know how weddings can be really fun, with everyone dancing to the fun songs, but you have to sit through boring stuff and weird dinner?  Well, the party was basically the best parts of a wedding without the awkward bouquet toss or dry cake. Just a straight-up, crazy dance party! I’ve never been part of an epic, international sing-along to Mr. Brightside before, but now I feel like I’ve truly lived.
One of the best parts of the weekend was that it felt like we all just drew closer together as the weekend went on.  I enjoyed the hell out of everyone I met! I have a long list of other tribes I want to go visit, and I definitely have some tag-envy!  November Project Providence has been a huge part of my life for the past year – I’ve grown a ton as a person and done some things I was totally afraid to do.  And now I know that it’s part of this international crazy community of the best people ever. The 1st Annual Snowglobe was full of beer and burpees, running and dancing, fun, friendship, and fitness (#freefitness) – pretty much the best things in life.  I can’t wait for next year!

Jan 30 – 5:27/6:27am – PR DAY! On the last Wednesday of every month, we run stairs. You get 40 mins to complete as many sets as possible, working your way up to 40 sets total, and a new PR. We’ll be monitoring the weather conditions (and stair conditions) closely during the winter months to make sure everyone is at their safest.

Feb 1 – 6am – HILLS! Our once a month hills workout will be taking place next Friday, February 1. We’ll meet up at Prospect Terrace Park (Congdon St, PVD), and head over to Jenckes Hill. If weather (snow/ice) is an issue, we will advise you all asap, so don’t worry.

Feb 1 – 6:27pm  – it’s social time! We’re heading over to the new Revival Brewing Co, Atwood Ave, Cranston (formerly Brutopia, aka where we had our holiday party). We’re going to enjoy food and drinks, and here’s the secret – we’re going to send valentine’s day cards to our sister tribe (November Project ATL, where our New England Patriots will be playing/winning Super Bowl LIII). So bring out friends, family, and your own damn self, and let’s have a great time!

Feb 9:  LET’S.  GO.  SLEDDING!  NP PVD is heading to Yawgoo Valley for some sweet snow tube action. Our goal: Book all of the 12pm session. How do we do that? You click here and pre-order your tickets. TICKETS GO ON SALE ON FEB 7 AT 2PM! THESE SELL OUT! So buy them sooner than later, and try not to wait until day of! Personal experience = when you go day-of, and don’t get a ticket before it sells out, you stand there, and don’t get to sled, and that kind of sucks. We’ll keep you updated the second we can buy them.

That’s all for now – go out, enjoy your week, make things happen, explore, live outside, make friends, and recruit your faces off!