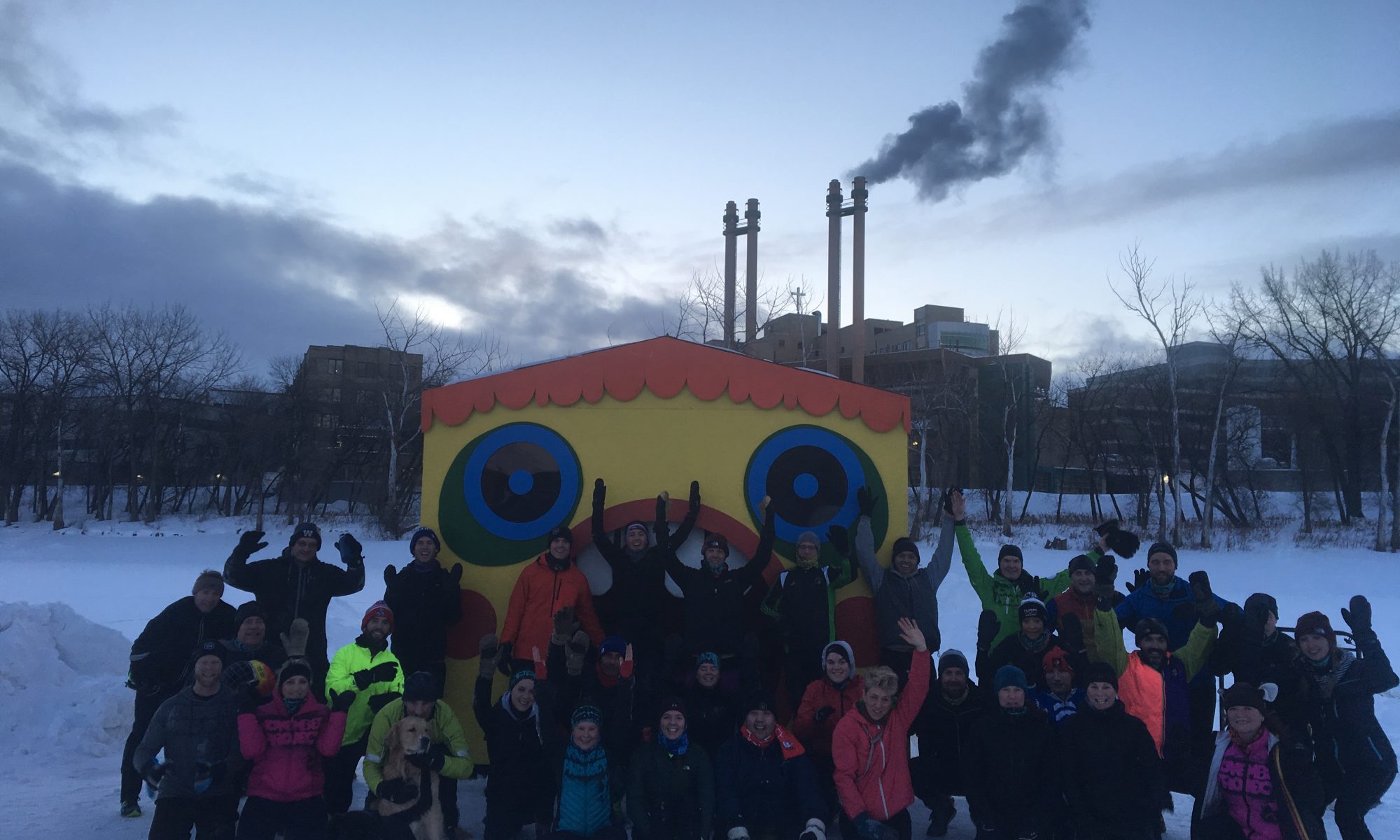 This morning was a fun one! We did all sorts of stuff out on the river. We did a run-stairs-hoistee circuit on the river trail and then we did snow sprints in the deep snow. Much run, very pain, all effort. (And BONUS no one lost their keys!)

Bob won the Shabooya today. Bob is my Dad. I’ve known him my whole life and he’s been coming to NP consistently since he retired in January. He is one of the loudest people out there (I got it from my father). Bob is always cheering and joking (and is attempting to maintain his rivalry with Yvette that was established during the Festival workout when they were team captains- so let’s keep that going). I’m so proud of my Dad for making outdoor fitness a part of his newly retired life. Bob is the most supportive person I know, and he is an awesome new addition to our crew. Bob we’re glad you’re here (and I’ll see you at family dinner on Sunday).

Weatherproof. We’ve said it before, in fact we say it all winter long, we are weatherproof. And actually, this year a lot of other NP’s in northern North America have had brutal, long, cold, snowy, ongoing winters… and all I have to say is (cue evil laughter) MWHAHA HA HA. They finally understand a tiny bit of what we go through every year. Wednesday after Wednesday, long after the winter novelty has worn off, y’all continue to show up. You continue to put in the work to grow and maintain this strong, beautiful community of ours and for that we really do appreciate you.

Goals. Make them, share them, pursue them, hold each other accountable to them, achieve them. Repeat. We are still in the unrelenting grasp of winter (winter/spring? sprinter, wing?) but believe it or not, spring and then summer will be here in no time at all. So set a goal now, make a plan, and start putting in the work. Sign up for a race, and then cover the distance! MEC does an awesome, affordable race series every year and NP always has a BIG showing, sign up for 1 or sign up for all 3 races!

The Manitoba Marathon, is another great option, it’s an incredible, high energy day for all. Last year we had tons of participants and the greatest cheer station the north has ever seen.

Let’s make this year bigger and better than ever. Last year we had three November Project relay teams, this year let’s make it FIVE! Five teams, twenty five racers out on the course cheering and running and rocking it, that’s a goal I can get behind. Whatever your goal, let’s make it happen! If you ever need help picking a race or making a training plan, talk to me at a workout, I would love to help you.

Remember a few weeks ago when we had the -51 workout? You know, the coldest workout in the history of the November Project movement. Well, we wanted a way to commemorate that momentously cold day, so we had a -51 stencil made! When it is warm enough out to tag again, we will do a one time only -51 tagging. We will warn y’all the Tuesday before and you can pack a shirt of your choice, and if and ONLY IF you can point yourself out in the group picture, you get the tag! Bragging right FOREVER. Stay tuned!

It was another great morning. And I’m posting the blog from Cafe Postal before 8:10, so that’s a big win. Have a great Wednesday!