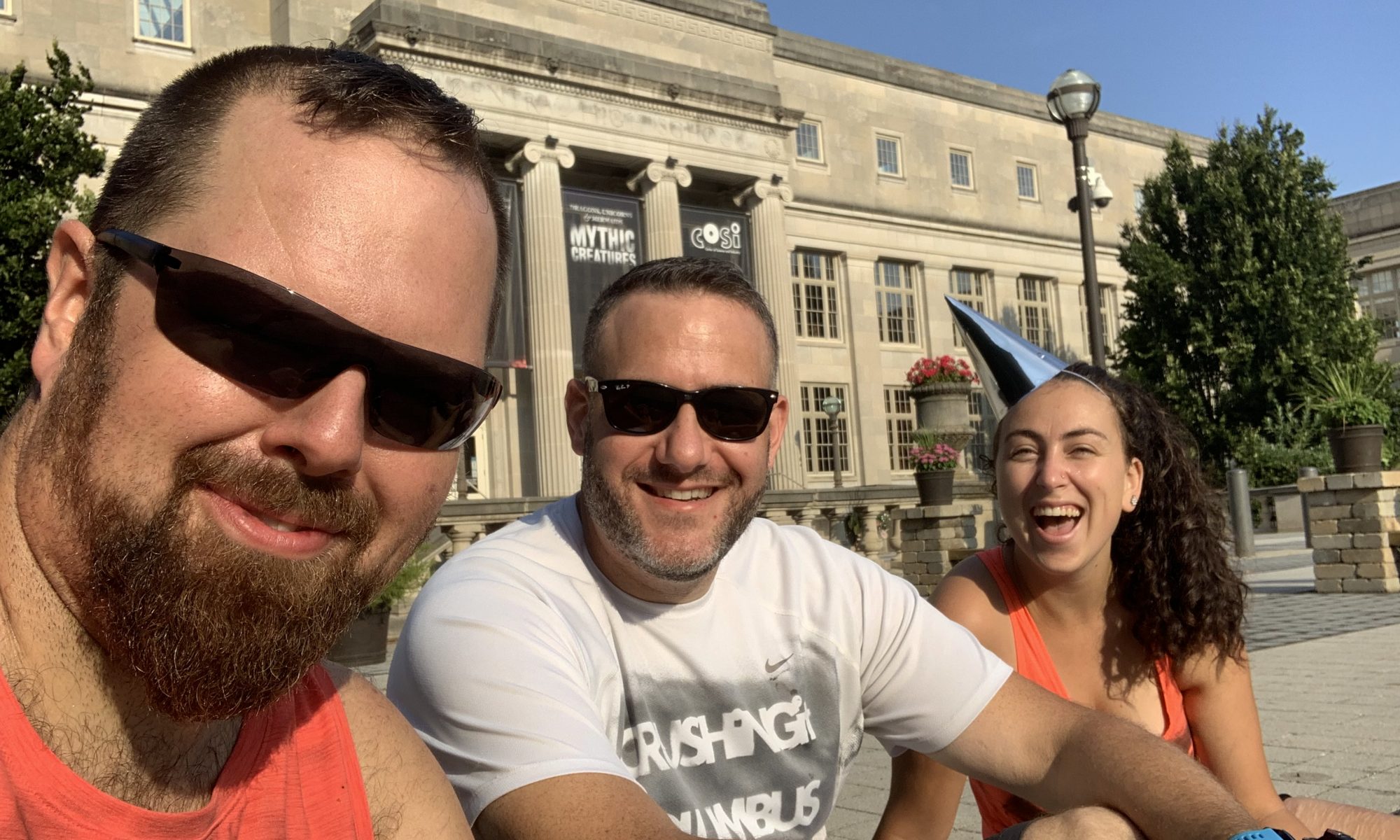 The Boston Marathon bombings. That’s how I got here.
Awesome intro. Round of applause everyone!!!

In 2013, two fantastic humans from the U.K. watched in horror, with many across the world, what was unfolding in Boston and decided to put together a fundraising relay from LA across the country to the Boston Finish line to help the victims. Danny Bent And Kate Treleaven sewed together an absolutely remarkable event in One Run For Boston that pulled together even more remarkable people. Throughout the course of the event, I watched some exceptionally tragic events, some outside the bombings, turned into most inspiring and beautiful moments one could witness.
ORFB came through Columbus, and I don’t fully recall how I heard about it, I immediately signed up for the group stage here. Looking through those that had signed up, I couldn’t find a definitive stage leader so I, as no one would guess of me, volunteered to lead.
We met at a place called COSI, right on the Scioto River, a bunch of fountains, some stairs, gorgeous view of the skyline, maybe you’ve heard of it?

As the relay moved closer to Boston, I started seeing the name November Project slowly pop up and begin filtering back west. Then came the pictures in Harvard Stadium. Then more people from NP joined in and the word became stronger.
Who the hell are these people???
So I start my research and here’s what I find; these people are happy. These aren’t staged photos with actors.
They. Are. Happy.
They’re excited. They want to be doing this. They want to be up that early, with each other, in all weather, all year round. There is something more here than I can put a finger on, but I want to submerge myself in it.
Oh, and they do some workouts.
Ok. I want this. I don’t know what it is, but I want it. I want all of it.
I looked deeper, going through the workouts. I knew the basics, and in typical me fashion, that was all I needed. Everything and anything else I was going to learn on the fly.
My most critical flaw. Sometimes ‘get an idea, hit the ground and make it work’ doesn’t always work.
I put out word to my friends; I’m starting this thing next week, it’s a workout, it’s different, it’ll be fun. It’s called Cowtown Fit Squad, we’ll get together Monday’s, Wednesday’s, and Friday’s for workouts, it’ll compliment your running regiment, JUST SHOW UP!!!

We were only a few, but we had fun suffering together, getting better together.
I had trouble getting people out and keeping them.
What I didn’t know then were the intangible parts of November Project that you can’t truly pick up if you haven’t been there. The nuances that bring people closer together by making certain little things ok to say or feel in public, things that unify everyone
Inside the workout, was more than just stairs, or hills, or a deck of cards. There’s the bounce, the high fives, fuck yeahs, sweaty hugs, the cheering from across the workout, the inclusiveness for all fitness levels. Outside the workout is the community, the diversity, the desire to share goals and achieve them together or help someone else get there.

Cowtown Fit Squad only lasted a few weeks, but I carried the workouts on my own afterwards. I had forgot that I had signed up for the Detroit International Marathon in October and I was down to 7 weeks till race day. Off my first 50k in May and my first sprint triathlon in July, I at least had some fitness going I to this emergency training situation. In five weeks I made it up to an 18mike run. With the NP workouts, and that limited training, I proceeded to run my first and only sub 5 marathon, which was a 38min PR for me!!
Maybe it was the NP workouts, maybe it was the rest from training for six weeks instead of 16. I’ll never know for sure, but I’m gonna plan on NP workouts to be a part of any training going forward.

By the end of 2013, I had fully put Cowtown to rest. I also put myself out there on the November Project site to be found.

I made Satkartar’s life easier finding me when I put my last name on the site, which I have received some pretty solid harassment for. She fired off messages to every Stuart Kirk in the Columbus area (more than me???), but I was the only one to respond. I told her she was going to be in for some fun with me, and I hope I haven’t disappointed.

The universe knew what was in store for me. It brought me Satkartar, Greg, and Crushing It Columbus family ahead of a critical life altering moment in my life when a month later I was asked for a separation and eventual divorce. Every week for a few months, as Satkartar so eloquently put it, I came into “so many workouts feeling like absolute trash” only to have so many of you unknowingly pick me up and dust me off.
In the nine months I’ve been apart of this, the people who know me best, knew what Crushing It did for me, to me. You guys were my glue EVERY. FUCKING. WEEK!!!
So many Wednesday’s I came in with a broken heart and left overflowing with love.

Six years, I have been on the road looking for NP. What I’ve found is so much more than I ever could’ve hoped for.