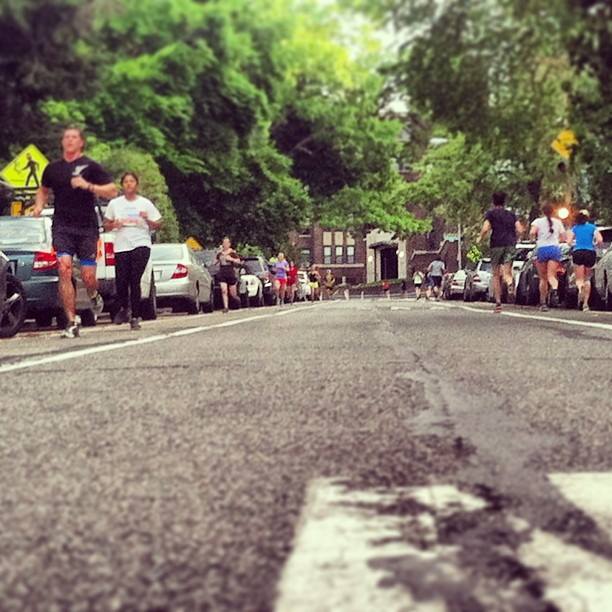 We ran hills this morning. Starting another week off with you guys and earning my monday is the only way I ever want to do it. Seriously, I don’t care if I’m 65 and still doing this (Insert great mental picture here). In the past 9 months (it’s like we’ve had a baby together), I’ve come to know this one crazy guy at NP as a coworker, coleader, and all around Portlander (Portlandian? Portlandese?). Not only that, he’s become family, like a brother, to me, just as you have all become my family. He and I don’t like to take credit for what NPDC has become because we know that without you guys, there would be less hugs, less smiles, and less community in our lives. But I’m going to take a second and give you guys a bit of a history lesson:

So there’s this really cool/turbo/chill woman we mutually know. She started attending tribal sessions in Boston when I was up there and we were sad to see her leave for DC in the spring of 2013. The good news was she took the tribe’s vibe with her and spread the vibe to a little boy named Danny. Danny was a recent college grad, super-fit triathlete, working two jobs and enjoying himself in a new city. Mieke and Danny happened to work together and she got him super-hyped about this weird fitness movement called November Project. Mieke wanted an NP in DC but didn’t have the time to start one herself (she’s got four kids and still finds the time to make it out to workouts). So she told Danny he should do it.

Right around the same time, I was transplanting from Boston to DC for graduate school. I had spent a few years in Boston working and was now pursuing a higher degree at UMD. I knew I couldn’t keep living without NP (the FOMO would be too strong) so Danny and I connected through our boys up north. That was a Tuesday night. The next Wednesday, we met at the Lincoln Memorial, 6:30am. A bromance was formed and the rest is history.

Phase 3 is in constant motion. Literally. We’re in constant motion building this community. The bounce is higher, the hugs are tighter (with hips in), and the Fuck Yeahs are louder. A good bit of that has to do with my boy Danny. Many of the crazy ideas, the stuff that makes you want to come back (besides the people and the great asses), come from his weird-ass mind. Tickle chins/ears/calves/etc. Basically what I’m trying to say is I couldn’t have done it without him. Plain and simple. So hats off, happy birthday, three cheers, and four BOOMS to that crazy guy that inspires us to be better people, hug more, smile more, and love stronger.