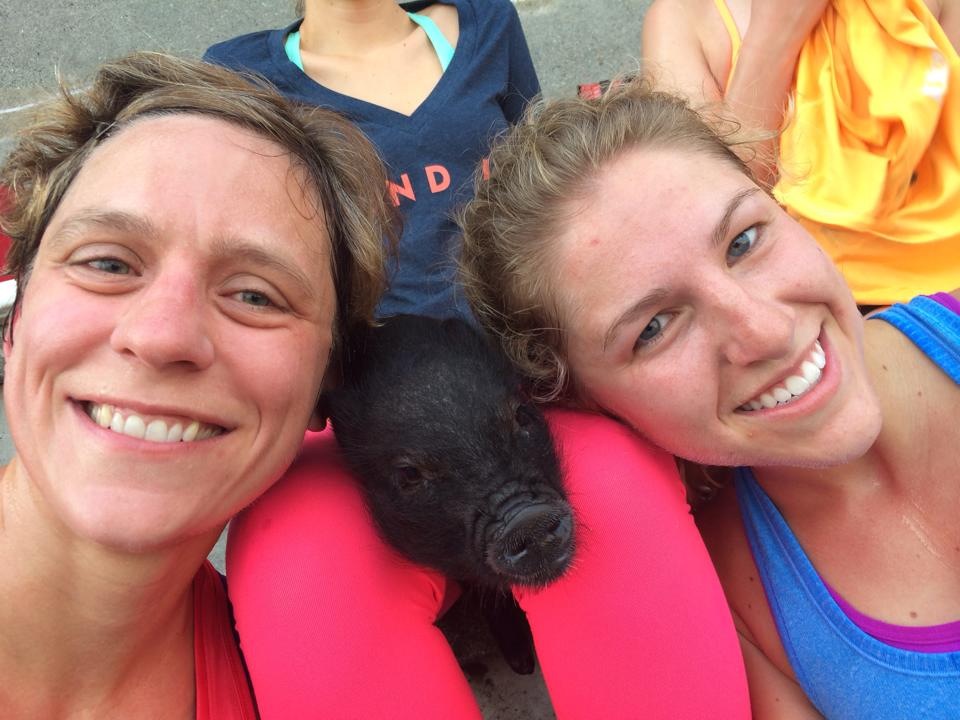 There are two athletic achievements that, upon completion, made me feel invincible.  The first: giving birth to my oldest daughter; the second: completing my first full tour of Harvard stadium.  Today, the annual celebration of one and the weekly repetition of the other happily coincided.  My oldest daughter turns 7, and what better way to celebrate that spunky girl who gave me the first taste of invincibility than a tour around the iconic horseshoe that returned that flavor of invincibility?

Invincibility.  Incapable of being subdued, defeated, or conquered.  The day that Liv made her entry into the world, I knew I had achieved a whole new athletic achievement.  Some may quarrel with that descriptor*, but I dare anyone to go through 15 hours of labor, 1 ½ hours of active pushing, and bring a 8 pound 9 oz baby – sans medication and epidural – and not feel like a bad ass athlete on the other side.

When that baby greeted her father and me with a scream to be reckoned with, I could not know how she would take on the world with the courage, humor, and grace that she has for the past seven years.  What I did know was that her existence made me feel like I could take on the world.  She and I were incapable of being subdued.  We were invincible.

Five years later, I was with my husband at Harvard Stadium on a hot, July PR Wednesday.  Who knew that his casual perusal of Runner’s World the prior fall + my sister visiting Boston would = me staring down giant concrete steps—I mean seats—at some outrageously early hour of the morning?  But, there I was, and if all these other (must-be crazy) people could scramble up those steps without regard for their shins, I was not going to be left (far) behind.

I made my way slowly, but steadily, around the sections … 31, 24, 19, 15… until I found myself staring down the final straightaway.  Section 1, that ironic finish, was in sight.  As I focused on finishing and not falling, I heard my name, which jarred me out of my trance.  The voice did not belong to Eric and who in the world else knew me here?  Must be another Erika (likely Erica), I thought.  I continued my steady trudge up and steady trot down.  But I heard it again—my name, only this time, many more people were yelling it.  By the time I reached Section 1, a whole group of strangers, who somehow knew me by name, were cheering me to the top.  As I flopped my sweaty body on that rectangular number, breath heaving, legs shaking, sweat pouring, these strangers welcomed me to Section 1 with celebration.  All those strangers, those fast, fast strangers, celebrated my first tour with the excitement that we generally reserve for family or close friends – or at least someone we may have at laid eyes on before.  But it was that celebration by this mysterious cheering section, that made me think, is there anything I can’t do?**  The sweaty, crazy, celebrating people in Section1 that I joined, we were incapable of being defeated.  We were invincible.

Invincibility.  It starts with I, and it certainly involves a component of what we, as individuals, can accomplish on our own.  It involves learning how to silence that inner voice that tells you that you cannot, that you’re not strong enough, fast enough, thin enough, young enough, fill-in-the-blank enough.  It requires pushing yourself over the hump, not to find that it is easy on the other side, but that you are on the other side and you are still going.  It involves finding a place deep – no even deeper – inside yourself, deeper than you believed possible, a place that is kind of scary but mostly beautiful, where strength takes root and eventually sprouts and sometimes, even blooms.

But true invincibility goes beyond the I, the individual achievement.  It took an entire other human being to become a +1 to the planet’s population to herald my first taste of invincibility.  It took a whole section of sweaty fast fuckers in Section 1 who celebrated my first tour to bring that taste back.  Invincibility—it is not just what we do; it is what we are a part of.  In a 2011 commencement speech, New York Times columnist David Brooks warned against the poverty of our culture’s emphasis on finding ourselves:

Your happiness and your worth are a byproduct of how you engage them. Most of us are egotistical and most of us are self-concerned most of the time, but it’s nonetheless true that life comes to a point only when the self dissolves into some larger task and summons. The purpose in life is not to find yourself. It’s to lose yourself.

Common advice to new mothers is to not neglect self-care in the wake of caring for a baby.  Common advice to athletes is to work toward new personal records.  This advice, in both cases, is sound.  It’s such good advice that I’ve melded the two—some of my best self-care comes from working toward new PR’s.

But this advice, unlike Mr. Brooks’, is individualistic.  As individuals, we can accomplish a whole hell of a lot.  But what we accomplish can collectively is, well, a fucking triumph. Which really, if we think about it, is why we tell each other, I’m glad you’re here.  Finishing 37 sections is no insignificant accomplishment for anyone.  Finishing 37 sections with hundreds of others finishing with you and supporting you along the way, every single week, well, that’s something else all together.

*I will bet, however, that quarrelers are unlikely to actually be mothers themselves.

**Walk down a flight of stairs later in the day, but I was blissfully ignorant of that at the time I finished.

2.  Friday is #PRhills.  Bring your hat if you’ve earned one, we’ll be spray painting for PRs.  It is also a birthday bash so bring your CAPES and CROWNS to the hills.  Rumor has it there will be water balloons….

One Reply to “Guest Post: By Erika Anderson of NP Boston”