Jamie showed up one day, came the next week and just kept on coming. The winter didn’t scare her, and each week, grew more and more out of her shell. She leads by example by pushing herself at every workout.. hard. She encourages those around her when everyone is heavy breathing a little too hard to cheer, and she now welcomes newbies with those open arms she was once slightly uncomfortable with. Meet Jamie, we’re glad you’re here.

It doesn’t matter if you’re living in the city you grew up in and know everyone, if you’re new to a city and know nobody, or if you have a core group of “go-to” friends. At times, we all tend to feel some type of isolation and lack of community – this is an unfortunate outcome of the increasing use of social media. Social media has decreased our face-to-face interactions. It is too easy to have a heavily social presence online/apps yet still feel very alone. I believe this is one reason why so many people are struggling with mental health issues today – a lack of genuine, face-to-face, human interaction which leads us to mistakenly believe we are alone in our struggles.

This is my 2 part story of finding community – people who accept, embrace, and encourage me –  with November Project Ottawa and being able to truly connect with people in a city that once felt very isolating.

I never found it difficult to leave home and live in a city where I knew nobody. In fact, this is something I always wanted growing up as a kid who felt she didn’t “belong” in her hometown. When I was five years old I declared I would go to the United States on a soccer scholarship – from a young age I had the urge to discover the world outside of my town of 50 thousand people, and myself in the process (perhaps it also has to do with me being a goal oriented, always planning capricorn).

I was fortunate enough to fulfill the declaration I made as a five year old and live in three different cities across the US – each time I embarked not knowing anyone – but knowing I would have soccer teammates to help me adjust to life in a world of “unknowns”. There was an assurance my new teammates would have my back and immediately become friends, and eventually family. Also – the three schools I attended were very small and that family, community atmosphere was president in the classroom too. To this day, I consider some of these teammates, classmates, and professors like family.

Above all – I knew I wasn’t going to be alone.

In 2015 I moved to Ottawa to pursue a Masters degree. My first semester was difficult. I found it hard to make friends and find community in Ottawa, even though I had a pretty small cohort from my master’s program. Not to mention the winter was dreadful compared to what I was used to and I really struggled my first year in many aspects. Luckily, I eventually made a few really great friends that made life in Ottawa fun, social, and not so monotonous.

There was still something missing compared to my experience as a student-athlete during my undergraduate degree. I was really longing for the feeling of being in a team atmosphere – for the social benefits and competitiveness that drives me to keep going when I’m challenged and supported by others. Going to the gym and doing classes was fun and a great workout but also expensive and I didn’t get to know people or connect with them outside of the gym.

Part 2: The Google Search for Free Fitness that led me to November Project Ottawa and much, much more! 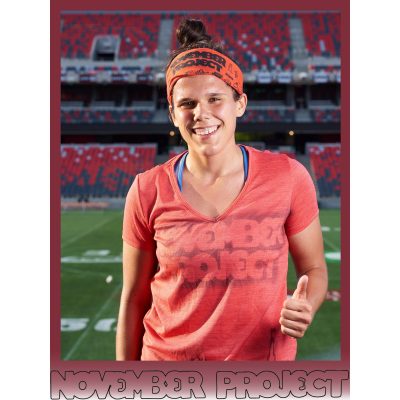 In August 2017 I googled “free fitness in Ottawa”. I was looking for something new to add to my fitness routine, and not looking to spend a lot of money.

I discovered November Project, the movement, and the Ottawa tribe on a Tuesday night and attended the next day for that Wednesday 6:29 am workout.

My first workout was great – the atmosphere was amazing, welcoming, and everyone was SO FULL OF ENTHUSIASM. The bounce was definitely my jam and reminded me of the huddles from my university soccer career (FUCK YEAH). Initially, it was a bit weird to experience the abundance of hugging and high-fives, as I never really considered myself a “hugger”. That has changed! The hugging, high-fiving and embracing (with consent) my fellow tribe members – those that are new and veterans –  is now my favourite part of November Project workouts. 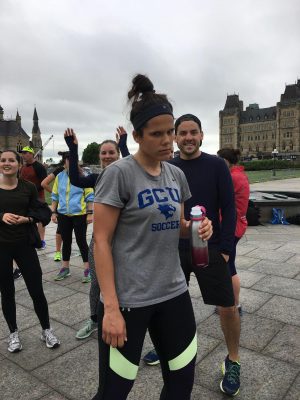 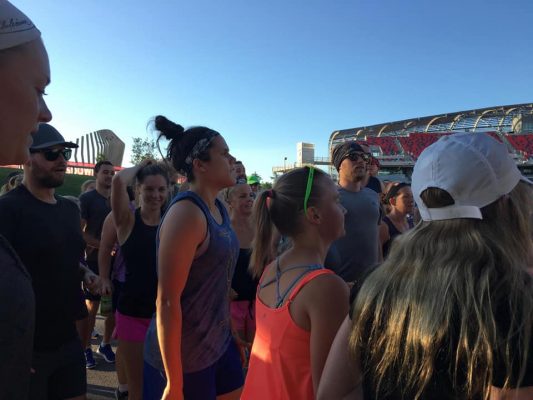 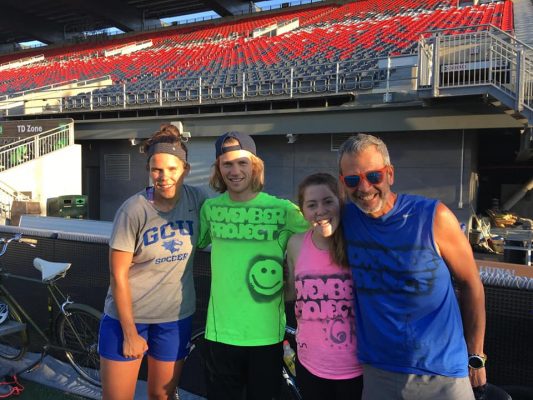 Since joining November Project Ottawa i’ve been introduced to SO many other free fitness groups. I even spontaneously became a founder of one when I decided I wanted to run hills one morning at the Arboretum Hill, and a group of people JUST SHOWED UP. Then Stephen decided to take my idea a step further (as you probably know, Stephen is kind of a ROCKSTAR in the Ottawa community) and hence the Arboretum Hill Club was born.

November Project Ottawa has helped me build SO MUCH community and facilitated interactions with awesome people who play a part in improving my mental and physical wellness, and making me love this city even more. I’ve also discovered my love for trail running, and I look forward to running the MEC 20K this weekend (the longest race I’ve ever signed up for). I wouldn’t even know about the MEC races if it wasn’t for the NP tribe. Also it’s much easier to #verbal a race when you know your NP Tribe is going to be there with you, giving you high fives, hugs, and cheers at the finish line, and then accompanying you to a bakery, patio, or pool after to bask in a post-race baked good/beer/or BBQ with the most amazing pancakes and chocolate chip banana bread you’ve ever had! A special shout-out to the NP tribe members who have offered me transportation so I can get to these cool events, truly embodying the philosophy of no tribe member left behind.

Finally, I gotta speak to the #weatherproof philosophy of November Project and give my love for the grueling winter months. If you haven’t tried a winter workout and are hesitant to show up in the frigid temperatures, I DARE YOU TO. Layer up properly and get out there (but don’t consult me for layering tips because I still am having a hard time mastering the balance between too many and too few layers). You will never be alone, there’s nothing quite like doing sprints through the snow and ice that creates a satisfying CRUNCH, having strangers give you looks of “wow these people are nuts”, and accomplishing all this before the sun has even set! THESE ARE MY FAVOURITE NP WORKOUTS BECAUSE THEY LEAVE ME FEELING SO BADASS. I PROMISE YOU WON’T REGRET IT!!!!!!!!!!!!!

Thanks to the incredible November Project Ottawa co-founders Liz and Lauren for taking the pledge to lead us, and being lovely, inspiring, badass people who welcomed me at my first NP workout with open arms (literally). Thanks to the NP Ottawa tribe for always showing up and being a constant presence and present (I’m truly gifted to know you all).

NP is much more than a workout – it is humans coming together to be better and help each other meet whatever goals they’ve set for themselves. November Project builds and strengthens Ottawa’s community in so many ways and enables us to combat the sense of isolation that can so easily creep up in our “modern” world! To me, these are the most important reason sto #justshowup 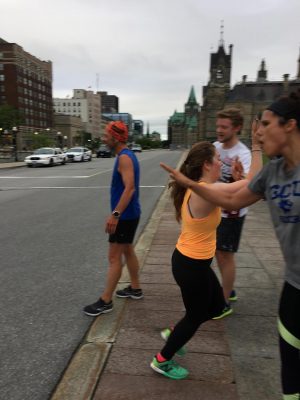 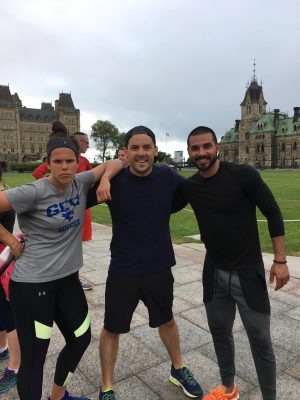