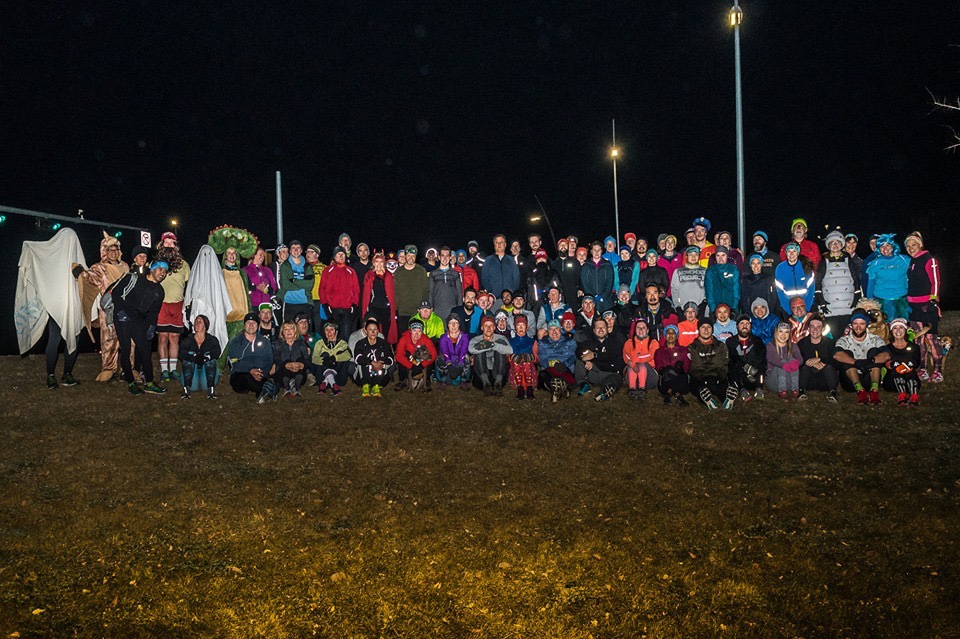 It’s great to see so many people dress up for the kick off to November Project’s 8th birthday month. How about the two Forest Gumps on the hill?

Let’s jump right back into a history class. Or maybe this is a stats class. It’s some kind of class.

4: In 2013, November Project Canada became the 4th November Project city and the first one outside of the US, officially making this thing an international movement. There are currently 52 NP cities across the world.

1: The number of workouts that were held 30 metres from Jen’s house. The second workout was across the street from her house. 4 people showed up in a thunderstorm. #safetythird

54: Our first ever toboggan day was on November 19th, 2013. The fastest recorded speed we’ve had tobogganing at Gallagher Park was 54km/hr.

22: November 22nd, we held our first social event at MEC. We called it a social, but then when everyone got there, made them cut out as many circles as they could.

1: The number of times an ambulance was called at a workout. It was for me.

13: December 13th was the first ever #NPSUMMIT and had leaders from the first 7 NP cities. It was held in Edmonton.

December 16: The first time we ever did a bounce at a workout. We haven’t gotten much better at them since that day.

4: The number of times someone has tracked me down and called my work to complain about NP.

3: In 2015, two more Canadian cities joined the movement, and it was the first time people wanted us to change from NP Canada to NP Edmonton. (We’re still holding out on that)

985: Today was our 985th workout at November Project Canada. That’s 985 mornings of free fitness in Edmonton.

???: The number of people that have ever attended. We truly have no idea. It’s definitely somewhere in the thousands, perhaps over 10,000?

Feel free to remember or not remember these numbers in case they are important for something we may or may not do later on.

11: We have selected 11 top secret days where we will give out #NPButtons this winter. The days are so secret that Jen bought a new safe, and locked the schedule inside. Anyway, 11 buttons, 11 random days, 11 laughs. You must be at the workout to get the #NPButton. If you miss the day, you miss the button. It’s our version of Pokemon or Mcdonald’s hockey cards… or is it Tim Horton’s hockey cards? Either way, I think these buttons are hilarious. We hope you like them, mostly because we’re spending hours making them in the sweatshop known as Nadim’s living room.

Sunday, the NP social at Plaza bowling starts at 1pm – Eventbrite (password: verbal) – See you there!

Monday, the workout is not at Diamond Park. Instead, it will be at Emily Murphy Park.