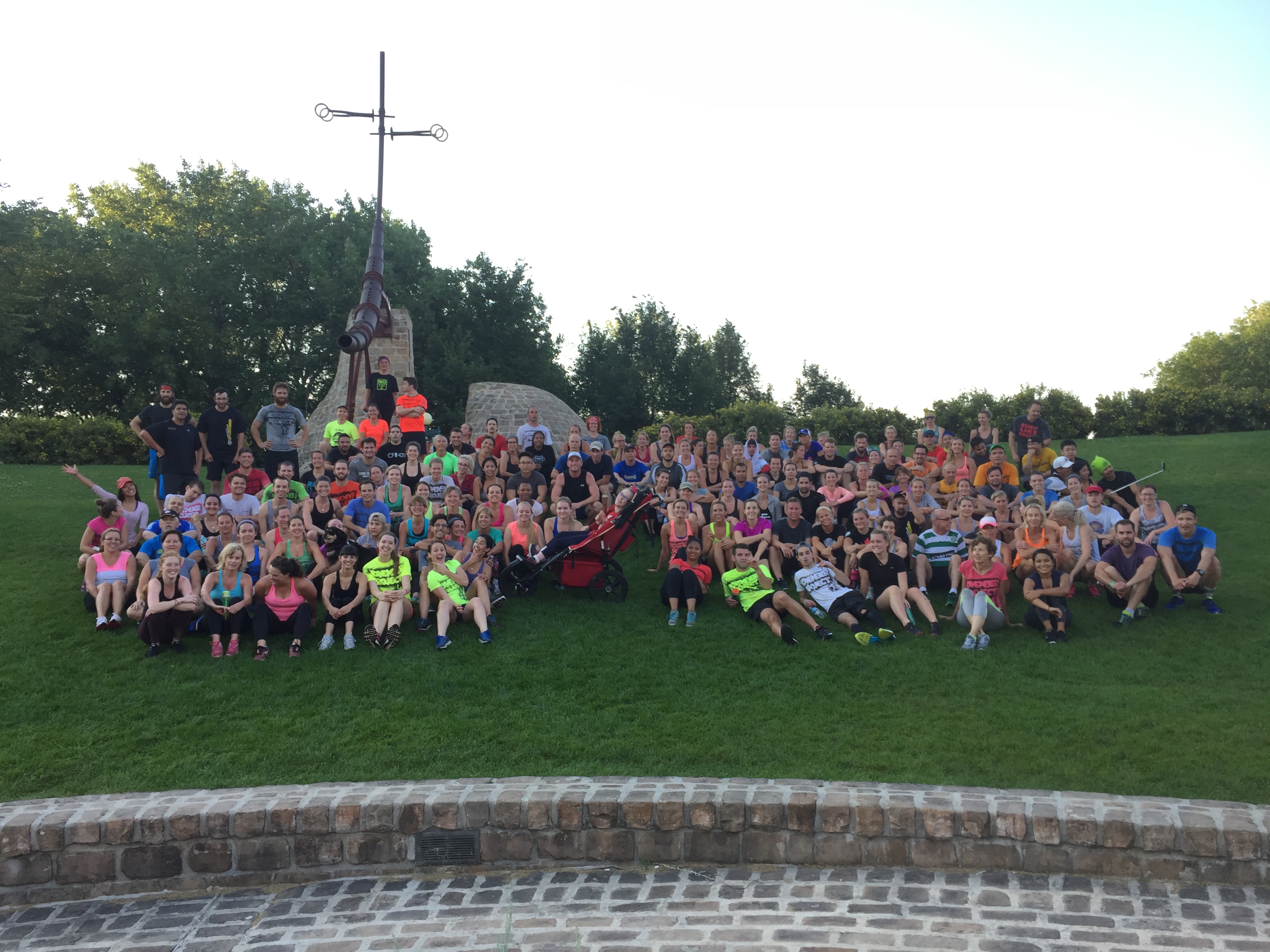 I was in to it this morning.  I mean, i’ll be honest – i’m in to it every morning.  But this morning I was really digging the vibe.  There were another 20 new people (seriously where do you all keep coming from? Winnipeg isn’t that big) and the feels as people gathered was electric, exciting, nervous, and friendly all at the same time.  The workout was hard – I know that ’cause I did most of it for the first time in a while (told my knee to buckle up) and cause everyone was SUPER gross and sweaty by the end.  That Party Time workout is the workout that just keeps giving – I can’t remember who said it but I heard someone say “I just can’t win” which is exactly the case with that one – the faster and harder you go, the harder and faster it gets you.  Sorry that was weird.

We made a lot of important announcements this week so LISTEN UP. We announced our first major kick (ha!) at this whole Social Good vibe that we blogged about a couple weeks ago – we are going to hold a shoe drive to gather up all your gently used running and athletic shoes that I know each of you have at least 5 pairs of at home. The goal is to fill the back of my (Ricks) truck with shoes and I am confident that we can pull together to do it.  Raid your closets, raid your families closets, raid your friends closets, raid your dogs closet (lets be honest he’s probably got a few old pairs hidden somewhere) and bring em out on August 31 so we can give back to the amazing city we call home and hopefully give some people an opportunity to get active that may not get that chance very often.

SECOND is the pop-up last minute #BetterThanBedtime tomorrow evening.  Megan (and Renee, but unfortunately she couldn’t make the date that we picked work – thanks anyways!)  stepped up in the spirit of our new “community building” pillar and decided we needed to get the tribe together for some good old fashioned drinking & running (not necessarily in that order. but probably). This is also an EXCELLENT chance to have an opportunity to raise a cold one for NP YWG legend Milana Schipper as she takes off for grown up school in Montreal (don’t worry there she’ll be around for next weeks workout, but this was the best day to get the tribe together). We will meet at the Cube in the exchange at 7:30 on Thursday August 4th for a 5.6 KM run, and then congregate afterwards at the Kingshead for a few celebratory brewskies (post brewskie run time TBD or MNAA [maybe not at all]). If you aren’t sure you can run 5 km no worries – we have a strict “no one runs alone” rule and we will make sure everyone has a buddy of the same running speed.  I (Rick) will be bringing up the rear with a jog/walk/sprint/puke/walk/slow pace as I can’t run much right now on account of kneeness. If you still aren’t feeling like the run is for you or you can’t make it at 7:30 no worries – just join in for the brewskies or a few cold soda pops. Show us the TIGHTEST and BRIGHTEST clothing you are willing to be seen in at an english pub. LOL.

Today’s positivity award winner has a special place in my heart.  Two years ago, I committed to running my first half marathon together with a new upstart group called MyTeamTriumph Manitoba, a group dedicated to helping individuals who may not be able to otherwise compete in endurance sports to experience what it feels like to persevere and cross a finish line with a team of friends.  Allie was the “Captain” of that team, participating in her first half marathon herself, and my most vivid memory from that day is that despite it being rainy, cold, kinda not great day to be outside, Allie’s smile shone bright throughout the whole race, and we really did help each other get through the race together. Since that day I have seen Allie on numerous occasions including a few visits to join us on Wednesday mornings – her smile is as bright as ever and it’s amazing to see her face light up surrounded by such positivity and community.  Thanks for smiling bright Allie – keep up the good work and hope to see you on the race course soon!