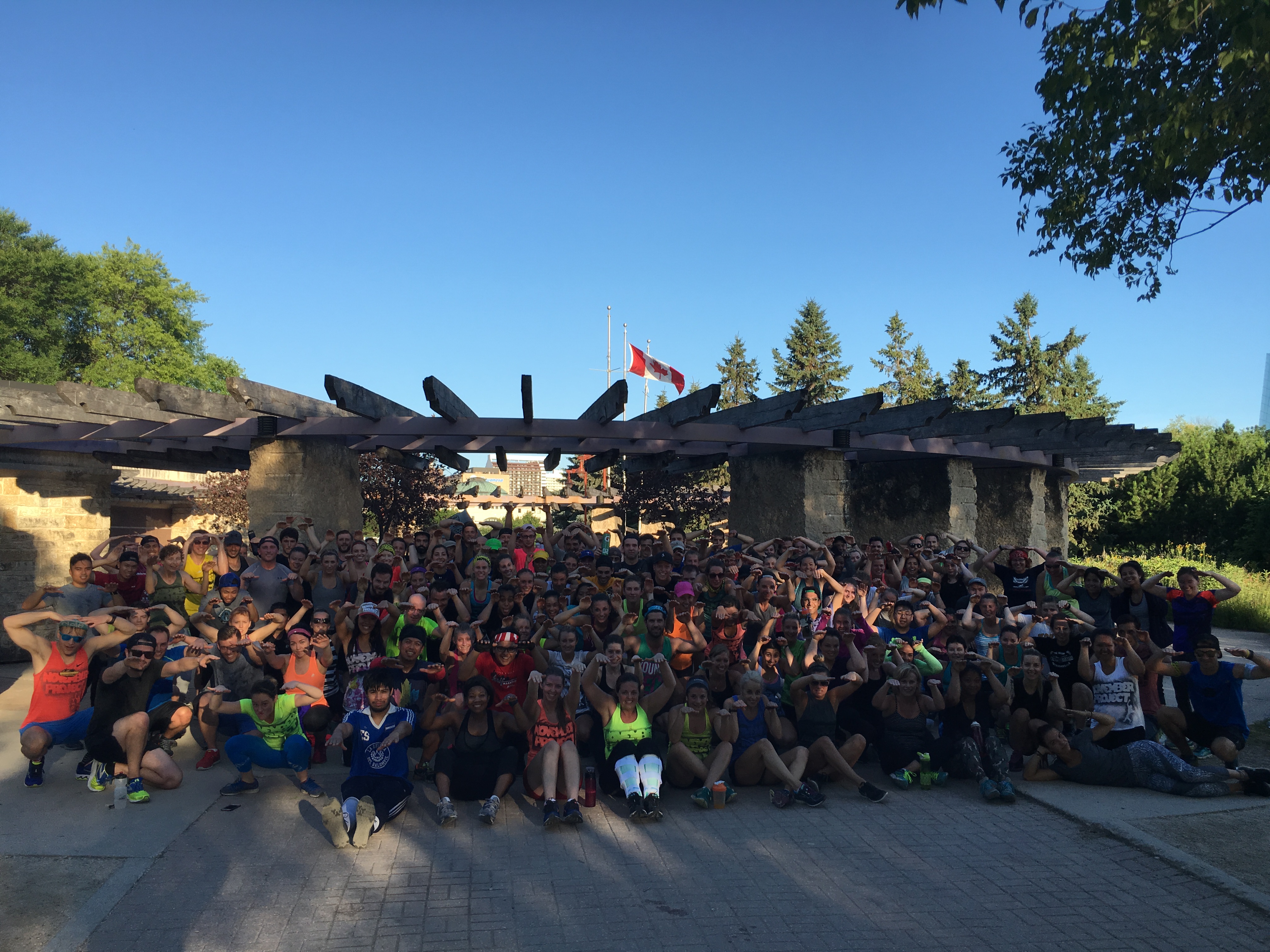 This weekend was big in the November Project universe. Let’s start with a shout out to everyone who raced the MEC race on Sunday and rocked the grassroots gear. There were also a few of you who ran the Spartan Race, which is no easy feat. Congratulations on finishing that one. Big shout out to Brian who rode from Kansas City to Winnipeg, something like 100miles a day for 10 days, 1,380 km’s total. I was actually bunked up with one of the co-leaders from Kansas City, John Kohler, over the weekend. Which brings us to our next point: Summit 4.0

For those of you that live under a rock, you may have missed all of the Facebook, Instagram and Snapchat posts over the weekend. NP Summit is a gathering of all the leaders from all 29 cities that have a November Project, where we meet up to talk shop and race hard. And a little bit of socializing (big party). It’s also open to any and all tribe members, we had eight come from Winnipeg, and over 400 total. The Friday morning workout was huge, (check out this video I shot and Rick put tunes to, it got lots of love on the social media).  Dooster sums it up pretty good in this video too, they were inspired by our bounce a couple weeks ago, and did a good job of emulating it.

Rick, Tom and I then had meetings all day with the other leaders, where we bounced ideas off each other, learned new workouts, got down and weird with a massive Rock Paper Scissor competition (which Tom won!), participated in a poetry contest, and chatted as a group about the direction of November Project as a whole. Which will bring us to our next point once I summarize the Saturday race day.

Saturday morning, all of the NP members and leaders gathered in the village of Blue Mountain for some pre-race tagging and to get another epic bounce in before the race. The race itself was grueling, we don’t have inclines like that anywhere near Winnipeg, but we raced hard, and both Rick and my teams finished within seconds of each other. I don’t know what place Tom finished in, probably last. Just kidding, he had a quick team.

Jamie Schild raced with the Canoes and Brews, and he ended up running all four legs of the race, joining Jason, Lauren and Megan on each of their legs while wearing fucking lifejackets.  Seriously – that shit was the best race costume out there. Jamie also missed this morning’s workout, but we decided not to do a ‘We missed you’ post for today since he’s probably still dying from that run.

Renee was misdirected during her leg of the course, which is really disheartening when you travel all that way, and put that much effort into race prep, outfits, tags, and all the logistics that go into a trip like that. So like the champ she is, she went out the next day and ran the course again on her own, firing off 10 km’s and completing what she came to do. Huge respect for that and for David (ask him about his new FUCKING TATTOO – ya that’s right), Jan-Jan “smiles for miles” Young, and Carl “smiles for beers” Bartel.

That evening was the first ever NP Olympics, which was basically a convention centre full of 450+ NP members, stupid costumes, 1000 free beers, and more competition. And a big dance party. It was ridiculously fun.

So that summarizes Summit, it was surreal, and words can’t describe the amount of happiness and positivity in that weekend. Come check it out next year, you won’t be disappointed.

Which brings us to our next point: what are our goals as November Project Winnipeg? How can we continue to make this exciting, new, and drive the hype in our community? For the last little while our goals have centered around growth – #recruiteverything and lets see how big this thing can get. And damn – we were pretty fucking successful. Good on Ya, tribe. While we aren’t going to stop recruiting – everybody needs a little free fitness and hugs in their lives – we are going to put an end to the goal of hitting certain numbers.  We feel like trying to say “lets get 300 at a workout” diminishes what we have done and all the hard work people have put in to build this tribe – we are super fucking happy when YOU show up, whether you are one person or 200. So from here on out – no more growth goals. So how do we keep this train moving, growing, interesting, and exciting?

We feel like we have some potential to do some good things in the community and make Winnipeg an even more awesome place to be. We also push each other as a group to be better people and to get involved. So we have three areas we want to set goals in:

Community Involvement: We feel like we’ve managed to tap in to something pretty good with this whole free fitness thing – people seem to dig it.  The community that you have all built together has really taken on a life of it’s own, and we are so pumped about that.  We feel like we have been given an opportunity to come together as a group and help to build up this great city that we live in through community outreach – whether that is bringing marginalized groups in to the free fitness world, perhaps organizing events such as a shoe drive where we collect runners during a workout, make badges to put in them mentioning free workouts at NP YWG, and then drop them off at a mission (coming soon). A winter weather gear drive in the winter, hamper delivery, and snow clearing as a workout are other ideas we have. The idea is that it will always be free, we will just be donating gear we don’t use anymore, and our time.

NP Social: We would all love to meet each other outside of the Wednesday mornings, where there is less working out and more socializing. We are hoping to plan a social night once every three months, and would be open to anyone taking on the task of organizing a night for us. If you want to volunteer for one, contact one of us and we’ll get you set down the right path for that. There is simply no better way to get to know someone than to hoist a beer or several (or iced tea if that’s your jam). Also, we want tribe members to have babies with each other.  So there’s that.

Race Takeover: We all love working out every Wednesday, and some people just do that, and some people do it as a part of their weekly routine. It’s great to have something to aim for when you are training, to see your improvement and to motivate yourself to improve more. We think it would be a great idea to all aim to complete the same race as a tribe. Set a number of participants we want to register for a certain race, and have a start line takeover. The start line at the marathon relay of the North Face Endurance Challenge (Summit) was the funnest start of a race I’ve ever experienced. It was basically a dance party, high fives, throw downs, and a little bit of getting Fired Up. So we are thinking of choosing the WFPS Run in October as a goal for us to get 100 tribe members out to race and takeover with #GrassrootsGear. If that’s too soon, then we will consider one of the big runs next spring/summer. There’s a 5 km, 10 km, and half marathon distance – so choose your poison and start working towards a new fitness goal with the tribe!

So what does this mean to you, the members of this tribe?  If the above doesn’t appeal to you, then it means absolutely nothing.  Our Wednesday mornings will still be the free-est, fiercest, funnest, and weirdest workouts you attend every week.  If that’s all you want from the tribe then we are still very much here for you to continue down that road.  However, if you read some or all of the above and thought “By golly that sounds pretty neat, I’ve been looking for some more niceness / racing / excessive drinking with friends in my life” (like we did) then saddle up folks cause this is going to be one helluva ride!

She’s great.  She put in some serious time to help us out with the yearbook photos (trust me, you would not have wanted to see Ricks editing skills) and she’s been a hardcore tribe member for several months now.  She even created her own tag after coming to ONE SINGLE FUCKING WORKOUT. Be like Celia, tribe.  Just kidding – but she’s pretty great.

Final announcement is about the SUP Beaches event hosted by Lululemon Winnipeg this weekend in Grand Beach.  We are SUPER pumped to be joining up with the Lulu team for a second year in a row to host a pop up workout on the beach (10:14 am), mixed in with a day filled with running, yoga, zorb soccer, SUP Yoga, bocci, and general bad-ass super fun times.  SHOW UP and check out the link for some things that require sign up. They are organizing a bus leaving Saturday morning out to GB if you need a lift!