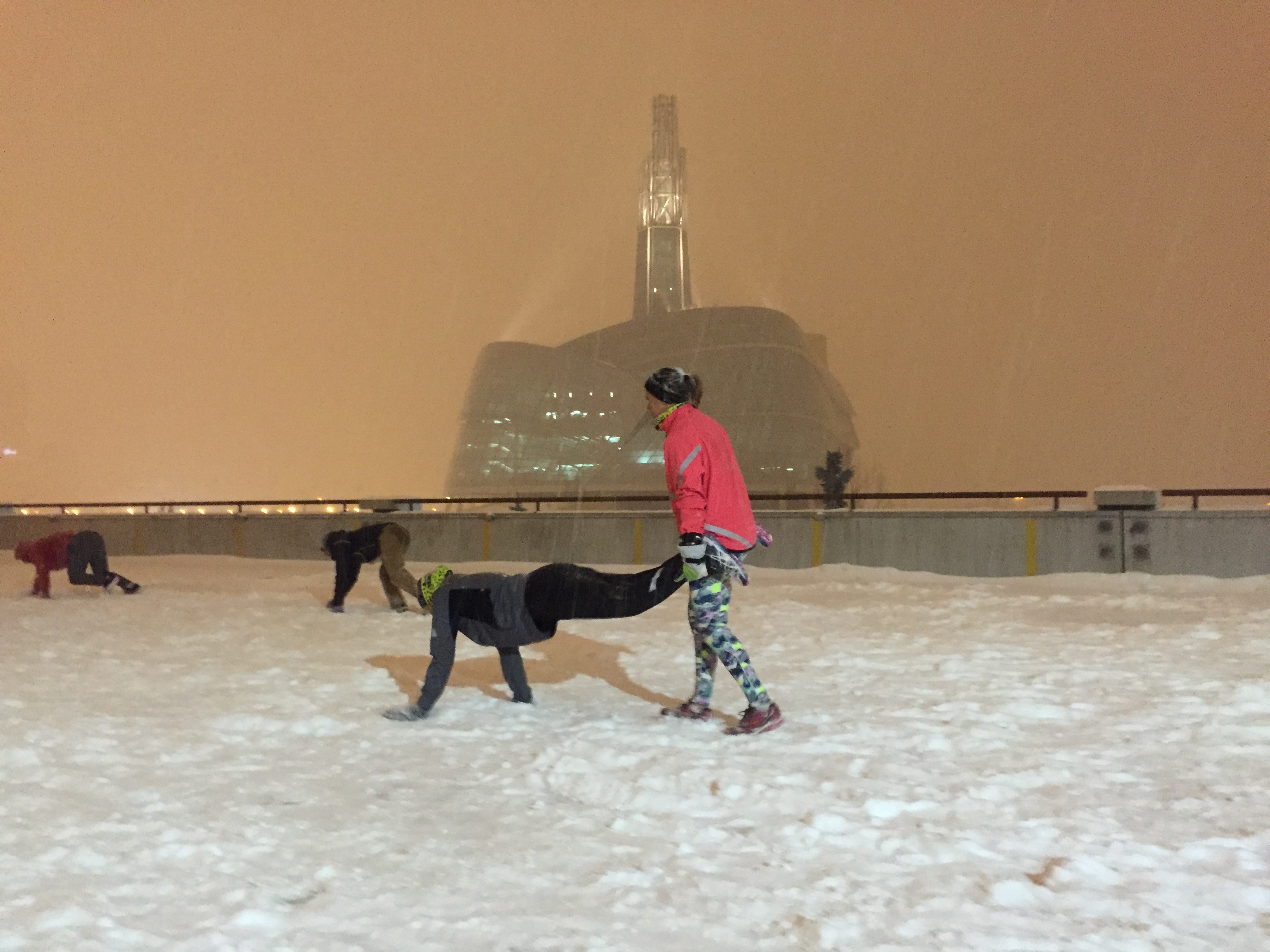 Wisconsin notes: Snow day Aussie-style, PR day. Record your PR results here and also sign the waiver by making an account, you hooligans. 200 by June, too easy mate. Some buffs still available, $5 each. Janet, you beauty. Read the blog in your best Australian accent.

You beauties, today was a cracker of a workout, for all of you that rocked up, good on ya! For those that couldn’t be fussed, chucked a sickie, maybe you had a bit too much grog last night for ‘straya day, fair dinkum, we’ll get you next time!

We started with a traditional Aussie cheer, (I said, do you speak-a my language?) bounced to some Men At Work before we got to work and I’ll tell ya mate, we were in for a real ripper.

We reckoned the top of the parkade would make for a great place to get it going. We started with the goon challenge, and I swear I heard a real live cockatoo as we brought the thunder (can’t you hear, can’t you hear the thunder?) from down under during the 100’s/floozy birds. Three sets of that had me sweating like a bag of cats at a greyhound meet. Hope you’re feeling that one tomorrow. Then a few kangaroo hops over our planking partners, and we were ready to spew our vegemite sangers from breakie (where tears flow, and men chunder). This transitioned smoothly into the Aussie crawl challenge, with basic Derek and his mate Will having a win. Now you know who to call after a night on the piss to get you home.

All this and we still had to do PR day (you better run, you better take cover). All the blokes and sheilas made for a choc-a-block parkade, and the snow was slushy on the turns, but our main man Carl paced the way to a ripping 70 levels (he was six foot four and full of muscles).

Before we talk about our Positivity Award winner, I think Tom’s toight and broight outfit deserves a special mention. Standing next to him, with her ever present and always infectious smile and laugh, is this week’s Positivity Award winner, Janet. She is Positive with a capital P, rivaling Milana for amount of energy first thing in the morning. On a snow day like today, we still had one first-timer, recruited by none other than Janet (she’s a strange lady, she make’s me nervous). Janet always brings her A-game, whether it’s for the workout or for fun. Here’s a fun fact, she completed a beer mile in the fall organized by her brother Graeme, and only spewed ten times! She is also fast like her brother; rumour has it she taught him everything he knows about running. Her ugly Christmas sweater for the workout before Christmas redefined ugly and redefined Christmas. I wish she would wear it to every workout and social gathering. She has been deserving of the Positivity Award since day one, and we are glad to finally present her with it.

See you next week, bring a mate! Or ten. Cheers big ears.

Sidenote: Yes, I realized my name is spelt wrong as the top of the blog, it’s kind of funny, so I might just leave it. If you don’t get any of the Aussie lingo, you can google it or ask me next week.

One Reply to “Do you come from a land down under?”