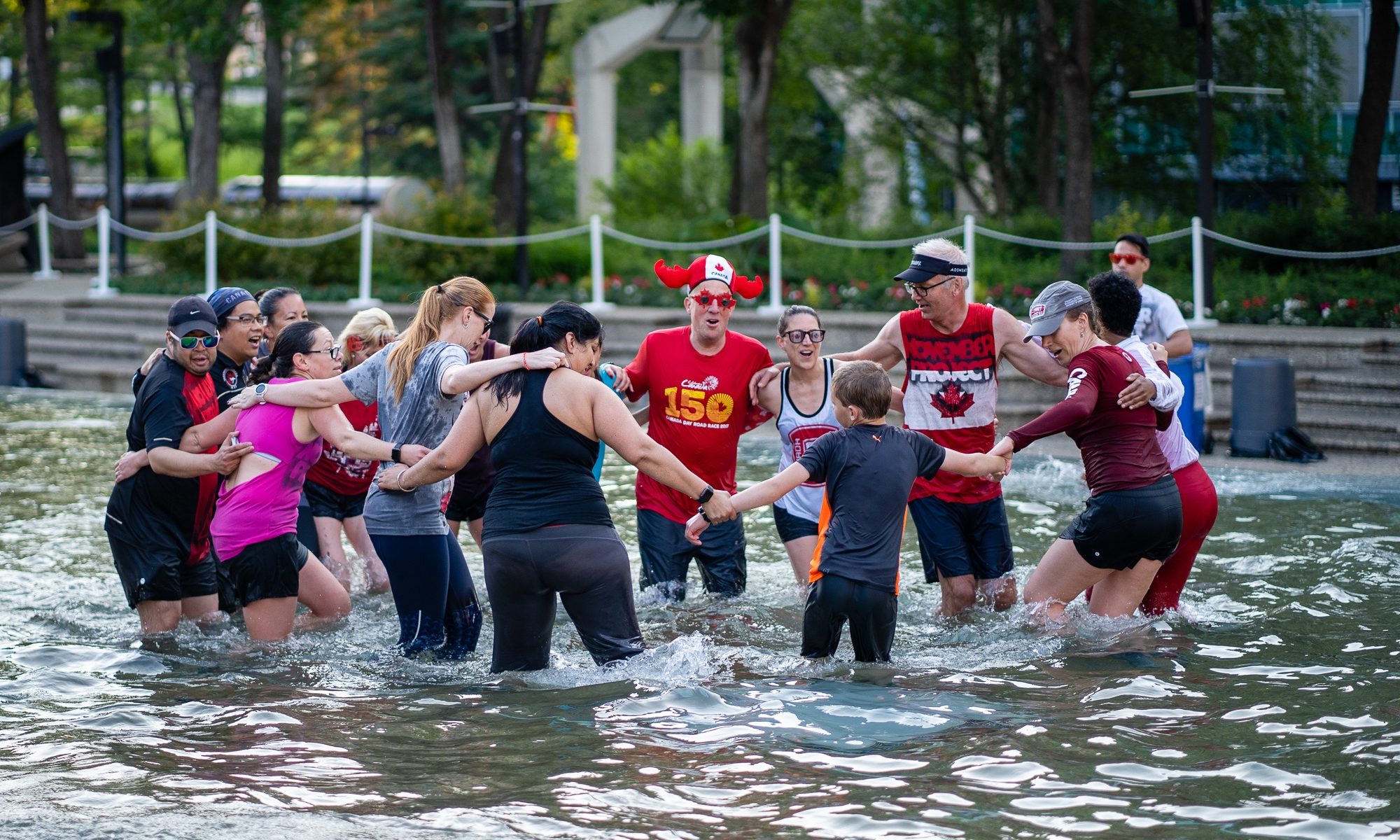 “The child who is not embraced by the village will burn it down to feel its warmth.” – Anonymous

In the past few weeks I have engaged in a number of conversations with people across the world about racism. I’m going to delve into this a bit more, but this blog isn’t just about people of colour. It’s about every marginalized population. It’s about the black community. It’s about the LGBTQ2+ community. It’s about the Indigenous community. It’s about those who don’t feel seen and heard. I’m just going to share how this has played out to me. I’m not black and I don’t know what it’s like to walk in a black person’s shoes. I know anti-black racism is far worse than anything I’ve encountered in my life. I’m not trying to minimize their experiences or distract from the issue that’s facing us right now. But I can take my experiences and find ways of how I (and hopefully some of you) can show up for marginalized communities using the platform that I have and that we all share – November Project.

Before I continue, it should be known that I consider myself to be very privileged in many areas. Some of those privileges have given me a step up in life. But I have some identities that have also marginalized me . All of my experiences have shaped me into the person that I am. I wouldn’t change a thing about who I am. I recognize that I’ve made mistakes and continue to make mistakes along the way. We all do. As they say, we need to learn from those mistakes to be better. It’s our job to be better.

Racism happens everywhere. It happens in schools. Some of you may know that I’m Muslim. I was 17 years old when the 9/11 attacks happened. I saw people in my school filled with anger. Thankfully, religion can be an invisible identity and unless someone recognized that Nadim is a Muslim name, they wouldn’t think twice about directing their anger at me. That didn’t stop me from feeling fear. It didn’t stop me from wondering if people would carry out some of their words of anger on me if they pieced together that my name was connected to my religion.

Racism comes at us in expected times. Every time there’s a “terrorist” attack, my internal shield goes up. I need to mentally prepare myself to see more hate from people I don’t know… hate from people I do know… and the twisting of stories from people and media that conform to a narrative. It’s funny what people will say to me without realizing the invisible identity that is my religion. Every time I go through customs, I prepare myself for additional screening. All it took was for me to get pulled aside once to know I have to go to the airport extra early, in case it happens again. I have to make sure I give them absolutely no reason to take me into that separate interview room.

Racism also comes at unexpected times. It comes at Christmas time during a dinner when you’re on vacation and staying with a family that has made you feel accepted for years… until that one day. That one day when the Islamophobic comment is made. It makes you wonder how many other people are careful with their words. Will they mess up one day? And which day is it that? I’d sure like to be ready for it.

Racism even happens at November Project Canada, the community where I am most comfortable. And for this reason, I have never been fully comfortable at it. I’m aware of the comments people make at workouts, at social events, and on social media. And while I may not react, I see them. I hear them. I feel them. I’m aware of how I’m treated differently by people. I know I have to work much harder to be seen and treated as an equal to Jen. Jen and I have had those conversations many times over the years. We’re aware of it. November Project should be a safe space for those who don’t feel safe in schools, in airports or at Christmas dinners.

I’m not trying to make people feel bad. People often say things without considering how they affect others. I am hoping that you’ll think twice about the words you choose. The words we choose carry weight, and while they may hold no weight to you, they hold weight to others. It’s why November Project no longer uses the term, tribe. Yes, you’ll make mistakes but that’s ok. It’s never too late to be better.

Here’s a recent mistake of mine. I was talking to an Indigenous man. I was doing work learning about and respecting identities, and how important it is to recognize others in the identity they want to be recognized in. In the middle of the conversation my friend used the term Native to describe himself, so, in my blunt and direct way, I asked him what he preferred to be called – Indigenous or Native. I wanted to understand his perspective on the why he chose to call himself Native. I had learned that “Indigenous” was the term Indigenous people chose for themselves and wanted to be called. Native and Indian was assigned by settler colonial powers). I had also learned that some people will choose to use different terms to describe themselves. “I’d prefer to just be a human” His response was so simple. My heart sank. Of course he didn’t want to be treated differently. He wanted to be recognized for who he is, but not treated differently. As I removed my foot from my mouth, we carried on with our conversation. I made a mistake. I apologized. I learned from it. There’s a good chance I make a similar mistake in the future too. And it’s going to be ok. I’ll be ok. You will be okay, too.

I know I’m not the only one who has experiences like these. Anyone who has been through something similar can undoubtedly recall it vividly. I know I can. Sometimes I didn’t realize it was happening to me as it unfolded. But I’d be uneasy for a few days, and analyze what happened. I’d try to find ways to explain how and why it happened. I’d process and process, but deep down, I knew what happened. And when I do see it happening and know what’s unfolding in front of my eyes, my first choice has been to react with kindness and forgiveness. I have never forgotten it though. Those experiences have burned themselves into my memory. I relive them in my head, over and over  again. Again, this is how I respond and how I process. And it shows up differently than the person next to me.

I’m not sharing this for pity or to make you feel guilty or to make you be careful with how you act around me. I’m lucky enough to have my allies that I can lean on. My allies know who they are. They’re people like Jen who I can lean on when I need. They’re people who are willing to be comfortable with being uncomfortable. And I’m very grateful to have those people in my life. Most of them have come into my life, in one way or another, through the November Project.

This is the part where it all comes together with you and with November Project. I can tell you that there’s personal work that you can do if you’re up for it. There is no shortage of suggestions on social media right now. But there’s also work FOR November Project and there’s work that can happen AT November Project. Our website states our mission as human development and community building through empowering group workouts. November Project has used fitness as a vehicle to help you be empowered to be a better person. Even if you only come to the workout, you have probably connected with another person. And while it’s a small step, it’s a step to strengthening our community. Perhaps you’ve gone further, and helped create a community of your own… even better! We’ve accomplished some amazing things so far. But we’re not done. We’re going to continue to use fitness as our vehicle for human development. And as we talk about building a community, we need to  talk about inclusion and diversity. Like running, you can learn about this at your own pace . It’s going to be completely up to you. I’m going on that journey and am happy to have you join me if you’re interested. I hope, at the very least, we can make you pause and think twice the next time you see someone being treated unfairly. It may not be a big step, and it may not be as fast as some would want, but it’s a step in the right direction. And it’s a step to turning conversations into actions.

I don’t have the answers. I don’t know if I’m even going in the right direction. In fact, I am fully prepared to continue to take wrong turns. But I’m not going to get there if I don’t start moving. So I’m going to move. One foot in front of the other, I’m going to figure it out. I’m sure I’ll have to take my foot out of my mouth a thousand more times. And like everything with the November Project, it is all better when we do this together. Let’s be the village. Who’s going to #justshowup?