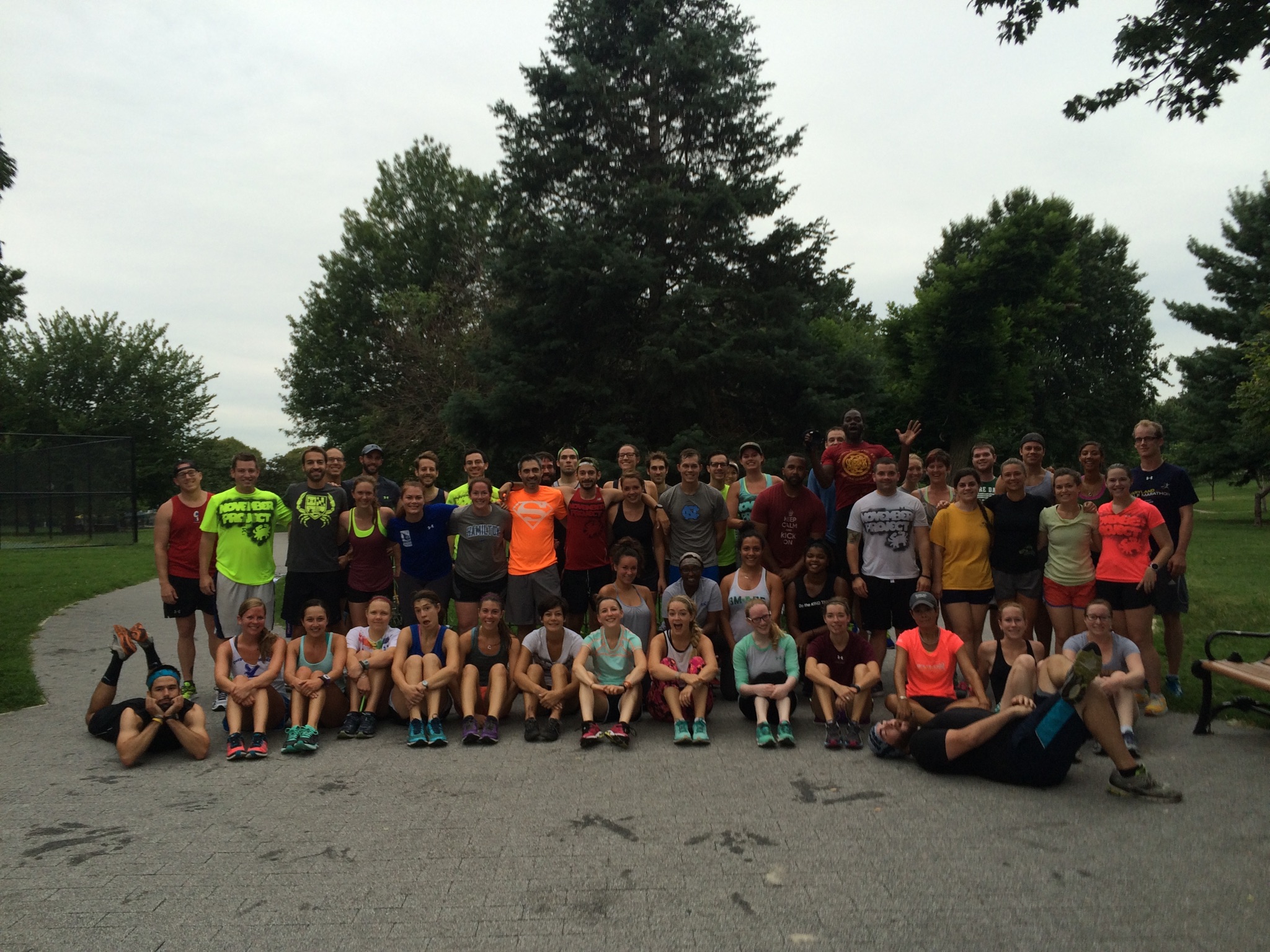 It was about 3pm today when we  finally realized that a year ago was our first #hillsforbreakfast workout. We quickly scrapped our original blog post and decided to instead write you something about the hill, something about the community that surrounds it.

It was only a year ago that hitting 65 people at  Wednesday  workout was a crazy freaking accomplishment. 65 people, at the time, seemed like the gold standard and was the number we decided would launch us to a second day of the week. For about 8 months we had just been doing Wednesday morning workouts, but between the numbers of people coming out and the requests for a second workout, a session of hills on Friday seemed like a logical choice.

We worried a lot about asking a group of strangers to run up and down a hill repeatedly. Running can be hard and boring and structuring an entire workout around a hill  seemed like a great way to drive our community back to bed. Yeah, it had worked in other cities, but maybe it wouldn’t work in Baltimore.

A year later, as I watched over 50 faces (some new, some old) run up an down our hill I was struck by the entire scene. It’s a pretty fucking cool thing being able to be part of a group of people like you all, people who actively seek out a challenge. More and more you all seek challenges out every day of the week, forming run groups, winning triathalons, entering 5k’s or 50k’s for the first time. We have people completing tough mudders, a million folks signed up for marathons, people competing in crossfit competitions, people running spontaneous ultra marathons from one NP city to another. When I look at all we have done this year, all of the challenges our tribe decided to grab a hold of and wrestle to the ground…asking you all to run hill repeats seems almost trivial.

A very wise person once said, ” the workout never gets easier, you just get stronger.” He was talking about the stairs at Harvard Stadium, the birthplace of November Project. That sentiment applies to everything we do. The hill is a constant, you are not. Yes, Breakfast hill sucks. It’s steep and long and even for the fastest of us it poses an agonizing challenge. But someday you’ll get to the top of that hill and realize that you won. You’ll realize that you’re stronger than you’ve ever been, faster than you’ve ever been and what was once the worst morning of your week is all of a sudden the most empowering moment of your year.  You may struggle with that hill for months but I promise you that day will come…you just have to keep going.

A year later, whether we’ve realized it or not, that hill has helped us grow. In a weird way i’m thankful for it. I’m thankful for a constant challenge every week. I’m thankful for hill training when it comes to be fall marathon season. But mostly i’m thankful for the community that meets me at the bottom of the hill each week and gives so much meaning to even my smallest improvements. Years from now, when NP is maybe just a memory, we can revisit Breakfast Hill and remind ourselves that in life it is good to have a challenge. Without a challenge, how can we watch ourselves grow?

As always, Take Big Bites out of Life.