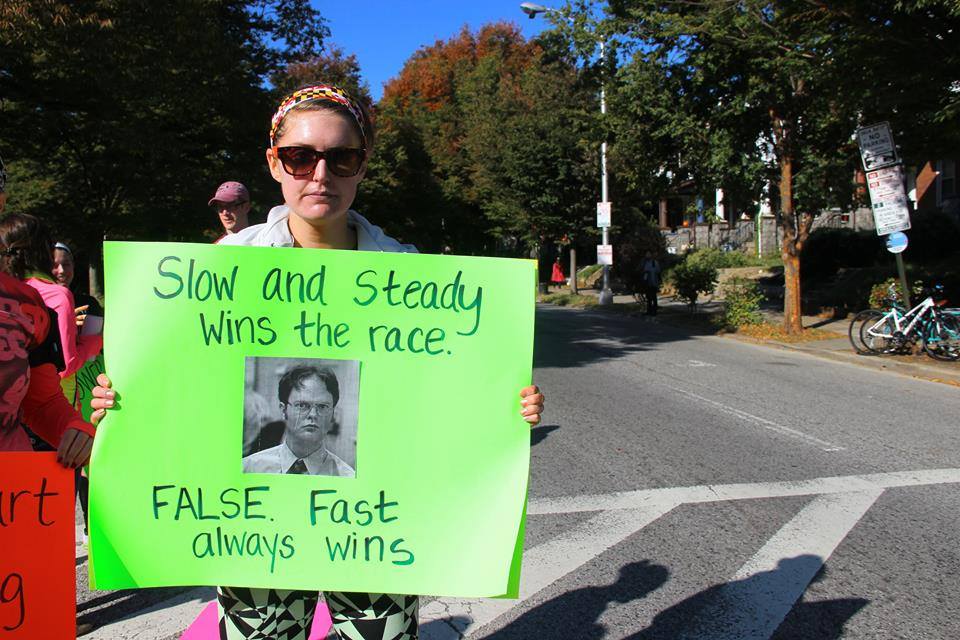 We welcome to the floor a sprightly lady known as Liz D. To say she brings a smile to your face is an extreme understatement. For the past two years, Liz has #justshowedup crazy outfits in hand, enthusiasm on point, and ready to throw down. Both at workout and during the rest of the week, Liz is a woman so full of light and love for this community and for this city, and that does not go unnoticed. If you don’t know her, get coffee with her. She may be meeting you after 12 hours at the hospital, but she’d do it anyways because she loves people. With that said, happy 2 year NPversary, Liz. Take it away:
Flash back to February 2014. Cold, windy, dark and snowy. Ugh. I had become a citizen of the Hiber-Nation, and the most physical activity I was doing was watching the Winter Olympics. (That counts, right?)
Just kidding, kind of. My friend Julie and I had decided to rally against winter and train for a spring half marathon. Neither of us were strangers to bad weather running, so we both suited up and crushed runs along the icy city sidewalks of doom; until one day, she mentioned that a friend from Boston told her about a new work out group in Baltimore called “November Project.” Apparently, there were people just as crazy as us who were willing to exercise in the arctic tundra together – YASSS my people!
I still remember that first morning. Our friends Leah and Megan packed in Julie’s car with us and we cruised over to Federal Hill. We climbed to the top of the stairs and were immediately greeted with hugs and high fives from about 15 people. The workout was Olympics themed, (“Novchi Projlympics” per the photo album… good one Nick 😉 ) and as newbies, we each were awarded our own handmade (pure silver and gold, duh) medals at the end of the workout. We left that work out on such a high, and we knew we had just discovered something awesome.

Little did we know that two years later, this new found gem would morph into what I like to call the Social Fitness Cyclone of November Project Baltimore.

​Watching this tribe grow and take on a life of its own has been incredible. In a world where we have become so technologically connected, yet humanly isolated, people don’t hesitate flaking or ghosting with or without the push of a “send” button. It’s amazing to have a group of people that are so consistent and serve as a constant force of positivity and connection in this world. All of you embrace NP as a community – not only encouraging and holding each other accountable at the Wednesday and Friday workouts, but supporting each other through marathon training, pushing to get faster on Track Tuesdays, trying new food at local ethnic restaurants, and supporting local businesses by bombarding them with a hundred sweaty patrons once a week. NP has evolved from a little group of strangers meeting once a week, to this huge community where the love, support, activities … and hash tags…  are endless.
We’ve made enormous developments as a tribe in just two years. At a time when Baltimore is only getting negative attention as a wasteland plagued with violence, murder, and burning buildings, we have gained a significant power to write a new narrative for this city we all love. This is just the beginning for this powerful, positive, amazing social fitness cyclone community. I can only imagine where the road leads from here, so I’ll throw on some #grassrootsgear, lace up my sneakers and wait for you to #justshowup. We’ll run that road together.
Love, Hand Hugs, and Fuck Yeahs:
Liz
Share via socials: