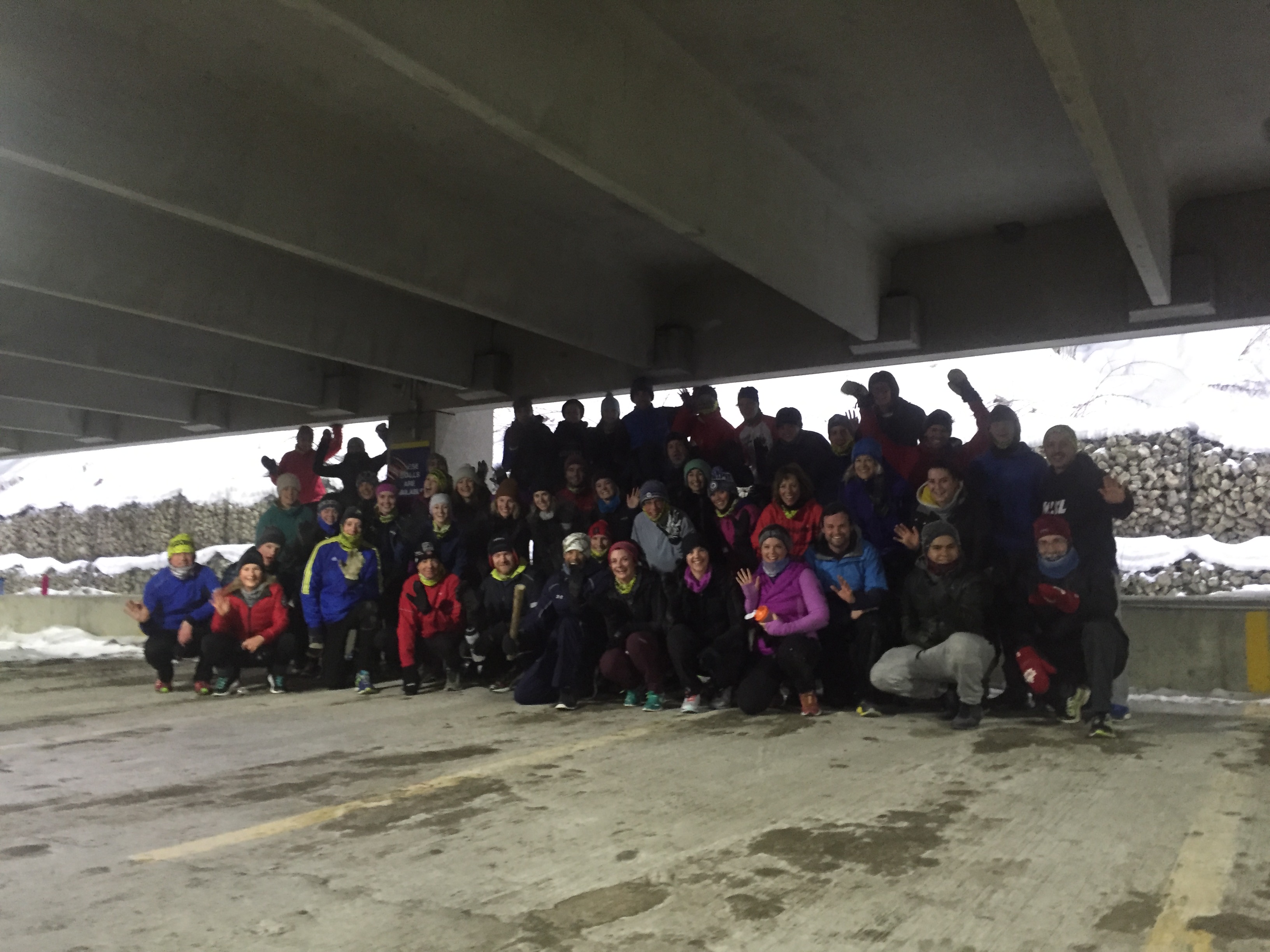 On to the guest words:

A few days ago, over libations to celebrate a fellow tribe member’s birthday and buffness, Rick and Tom, two of our three ever-charismatic co-leaders, were going about recruiting new bodies– as you can imagine, birthday parties present prime NP recruiting opportunities. Given that the Winnipeg tribe is aiming for 200 souls in attendance by summer, it’s probably best to deploy all efforts early and efficiently, birthday parties included. Of course, my enthusiasm for NP knows no bounds, so mid-pitch, I interrupted Tom and asserted to the new recruit that NP is quite simply a “game-changer” (exact quote). This opened the door for Rick and Tom to ask me to continue the pitch myself. Not wanting to disappoint them, I sized up our interlocutor: a fit young lad, who would probably really enjoy NP if only we could find something to motivate him to get out of bed. Of course, my immediate reaction was to suggest NP was a great spot to “meet chicks”, trying to capitalize on the assumption that many heterosexual lads in their 20s go for this line of argumentation. I think our recruit was somewhat shocked that a woman would offer this up as a reason to join NP, but hey, whatever works, right? Wrong. You know what they say about assuming… This guy looked at me and said “Uhm, but what if I have a girlfriend? What if I don’t want to meet chicks?”. Clearly, I need to sharpen my sales skills. I felt like I had mucked up my first real recruiting opportunity–in front of our co-leaders, no less. Obviously, I have way better reasons for why NP is the best darn thing you’ll do for yourself. Mercifully, Rick asked me if I’d like to guest blog to share my NP experience and hopefully redeem myself for such lamentable recruiting. I certainly did not, and do not, want to give the impression that NP is a fitness version of Tinder, with condoned bum-grabbing and flirtatious jump-squats (although I won’t lie, I have seen some pretty sexy burpees from time to time). This time, with this guest blog, you better believe I’m going to nail the pitch and I’m going make sure any new recruits reading this are going to swipe right.

My career led me to Winnipeg a year and a half ago. To keep the story short, I chose to leave everything behind in Ottawa to pursue the opportunity of obtaining tenure. For anyone who knows the academic market, you know tenured positions are increasingly rare. My Ottawa friends scoffed: ‘You’re moving to Winnipeg? Really? Realllllllyyyyyyy? But what about the winter???’. I tried to be optimistic about the move: it was about pursuing my dreams, my happiness and all those other things you read about on inspirational Instagram accounts and posters in HR offices. Truth be told, when I finally got to Winnipeg, it felt like I had moved to another planet. You’d think the winter would have been a turnoff, but that was never the issue for me (incidentally, I can’t wait to get my NP YWG -35ᵒC badge). Frankly, I found Confusion Corner way more terrifying (for you international NPers reading, please note that Winnipeg’s Confusion Corner has its own Wikipedia page: https://en.wikipedia.org/wiki/Confusion_Corner). I thought leaving my friends and family behind in Ottawa would be significantly easier than it was turning out to be – I’d travelled all around the world solo and moved out young, so how hard could moving to another Canadian city really be? I was independent and self-sufficient, right? Well, I can tell you, I’ve never felt more alone in my life than during those first six months in Winnipeg. It wasn’t that the city didn’t afford fun activities; Winnipeg is renowned for its music scene and, if I may be so brash, I’d say the restaurants rival those of any of the big cities – ever heard of Dinner on the River by Raw:Almond? Check it out. Impressive. Unfortunately for me, I just didn’t have many friends to share these activities with. Most of my demographic was married, tending to kids or had their own social circles that were somewhat impermeable (people here tend to forge friendships from diapers onwards…). I tried to make new friends. Boy, did I try. I was that awkward gal at yoga saying hi to everyone in the class, only to realize people were there to savasana not socialize. Oops. I was that lone soul at the coffee shop engaging with local baristas trying to get my finger on the pulse, only to feel like my enthusiasm probably meant that I had had way too much espresso. Even my students were concerned that I was probably feeling a bit lonely and offered to invite me to their families’ socials. You know you’ve hit a new low on the cool scale when your undergrads become your social managers. I don’t think anyone knows how difficult it is to establish a new friend circle in a new city whilst in their 30s, until they’re in that position and have to; it’s not easy people.

One morning, while driving to work at 5:55 a.m. (yes, you read that right), I saw a few runners congregating near The Forks. I thought nothing of it at the time, but, looking back now, that was probably my first glimpse of NP. A few weeks later, I figured I’d stop wallowing in my social misery and make even more of a concerted effort to meet new people in Winnipeg. Surely there must be kindred active spirits, I thought. I wound up joining a hiking group through the social site ‘MeetUps’ and met a few nice people. One of these new friends suggested I then try a bootcamp class led by another NPer, Samantha Squire. Upon the recommendation, I signed up for Sam’s bootcamp and started reading her blog. Sometime toward late September, Sam posted about November Project on her blog. I read her post. And suddenly, it was like all the social stars had aligned: I knew this was exactly the kind of activity I was looking for. I was absolutely going to show up. Lucky for me, there was a pop-up workout that very Friday. For those of you that will recall, this pop-up was the stair workout at Shaw Park.

That Friday, I got up at 5:30 a.m., ran over to Shaw Park and was ready to see what NP was all about. As Sam had written, sure enough, I was greeted with hugs and “good mornings” all around. It didn’t feel like 6:14 a.m. in that everyone was remarkably awake and happy, even with no coffee in sight (!!!). As people did push-ups and ran stairs, the smiles never faded. I remember thinking Rick was probably the coolest looking “aerobics instructor” I’d ever seen (this is how I referred to the co-leaders before knowing NP terminology). Trust me folks, no one rocks polka dot shorts better than Rick (this is second only to Tom’s neon green leggings). When the workout ended, I saw people giving goodbye hugs and saying “have a good week”. Even though I didn’t really know anyone there, just to see that sort of energy was extremely uplifting. I was grinning from ear to ear even though I couldn’t feel my calves. I figured I’d thank Rick on my way out of the stadium, prompting my first verbal confirming that I would be there the following Wednesday.

Fitness has always been very important in my life. It has been a grounding activity to manage stress and it has afforded mental tranquility in times of personal chaos. But, if I’m truly honest, one of the things I enjoy the most about fitness is that usually it leads to good people. And NP has not disappointed. Every Wednesday, no matter the weather, you can count on at least 60 or so folks to show up at The Forks in bright spandex ready to push-up, jump up, and run to the likes of Nick Jonas and Justin Bieber. This tribe has brought me into their fold and I don’t think they realize just how much their smiles and “fuck yeahs” have appeased my sense of isolation. If you are new to the city, you need to get in on this, because I can guarantee it will make you fall in love with Winnipeg. And if you’re a homegrown Winnipegger or Manitoban, well, I think NP has the potential to make you see facets of this city and its people you never knew existed. You might even meet some nerdy out-of-province expats, such as myself (I’m not sure that’s a valid sales point, but I’ll throw it in there anyway).

People often complain that there is a lack of good in this world. All jokes asides, I think it’s important to underscore what Rick and Tom (and now Derek) have done for Winnipeg by bringing NP to the city. Outside of Manitoba, Winnipeg is a city that is often associated high crime, racism and closed-mindedness. I regret to admit I was one of those people that believed some of the negative press. But the NP Winnipeg tribe has shown me an alternative narrative: the tribe is absolutely cosmopolitan, multigenerational, multilingual, as well as multifaith, and it is united in its unique diversity. The people are good, real good. So if only to restore your faith in the good of humanity, come try a workout. Bonus: you might even increase your cardio.

So, yes, while it’s true that maybe “chicks” is one reason to attend NP workouts, I can list a whole other set of significantly more valid reasons: improving your holistic health; countering social isolation if you’ve recently had to move or if you’ve suffered a loss; increasing your range of motion, including how far your lips can form a smile; laughing; hugging; forging a sense of community; meeting new people; pushing yourself to finish off a set you didn’t think you could finish; renewing your faith in the good of people; wearing polka dots and neon without apology; seeing the sun rise; receiving the positivity award; getting a nod on @ButtsofNP; feeling welcomed by fellow tribe members; giving into the guilty pleasure of listening to pop music unabashedly as you crush a PR; achieving a sense of accomplishment before most people start their coffeemakers …etc.

For nearly a year, I was ready to pack up, go back to Ottawa and pretty much give up on what I set out to accomplish here in Winnipeg. But NP Winnipeg changed that (See? Game-changer, folks). Of course, I’m partial to thinking that our Winnipeg tribe is the best tribe, but I truly believe it. Rick, Tom and Derek are amazing co-leaders and they will make you feel like burpees are the most fun you’ve ever had in your life. When was the last time you couldn’t wait to wake up at 5:30 a.m.? I guarantee you, if you come out, that’s exactly how you’ll feel each Tuesday night as you tuck into bed.

In French, we say “qui se ressemble, s’assemble” (which more or less translates to “birds of a feather flock together”); so if you like good things, you can flock with us.
Swipe right and just show up. You won’t regret it.