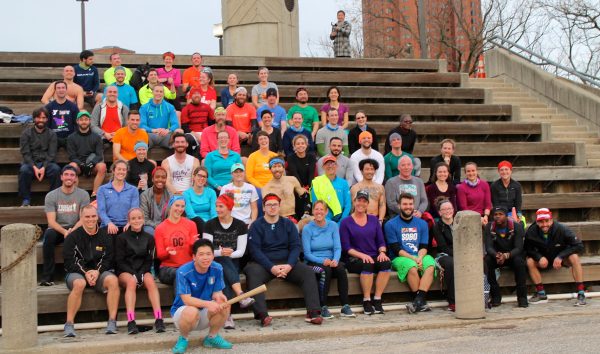 The funny thing about PR day is that it is a 30 minute work out that really doesn’t hold any weight outside of the world of November Project Baltimore…and yet people have such strong reactions to it. There is always a couple of “oh shit, I didn’t know it was PR Day” palm to face reactions at the sight of the rubber bands.  We know there are folks who just flat out look at their calendar and don’t show up to NP on PR days. We get it, PR Day is one tough workout BUT let’s bring it back to the foundation of November Project for a second. The goal was to get stronger/faster/fitter together in your city by pushing each other and encouraging all those around you to make the city a smaller more connected place. SO PR day is 100% made up but it is not just any 30 minutes. It is 30 minutes of 100% HARD effort. It still gives me nightmares sometimes and I’ve been stuck on the same whole number PR for about a year…! (March, I’m coming for you…8.1, there I said it!) It’s no secret that getting to the .1 is the hardest when you’re trying to reach a new PR. It is 5 burpees and ~200 meters of gut wrenching sprinting to get there but DAMN when you get to that point and break your PR it feels GOOD. It’s the one day per month we lace ’em up tight and throw it all out there and you are stronger for joining and pushing yourself.

For whatever reason that comes with February, this morning PRs seemed to be dropping like hot cakes! Perhaps it was the weather that let us run faster, or maybe it was the extra work you’ve been putting in on the side, maybe it was whatever your roommate made you for dinner last night that got you all fired up to race. Was it the high-five at exactly the moment that gave you the turbo speed you needed it. The truth is it was probably a collection of reasons why you got up, showed up and pushed as hard as you could to beat your previous record. And we are damn glad got here to do exactly that. There were some beautiful things happening out there this morning!! We wanted to highlight a few of the beauts just incase you were too busy sucking wind (like I would have been) to notice.

At 5:30 we had Gail Betz celebrating her birthday by DOUBLE VERBALLING (on PRDAY, WHO DOES THAT?!) and crushing her PR by .8!!! Gail set this goal and asked Nick to pace her to a PR at 7.1 but little did she know she would have the speed, grit and determination to demolish her PR by much more than that. Congrats to you, Gail and HBD! It’s takes guts to put it all out there. Kudos to you! 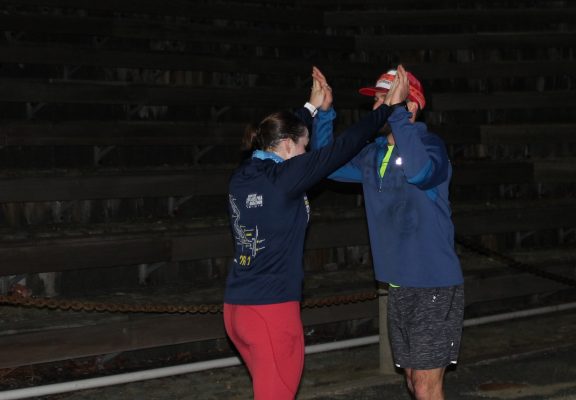 The other beautiful thing I wanted to highlight was at 6:30. Coach Shaun (Alder) brought some students from Digital Harbor High School to see what the fuss is about at November Project. We welcomed them right in, let them yell FUCK YEAH and show no signs of remorse then we showed them what this PR day thing is all about. Impressed by their ability to get themselves up and at a workout before school and countless other commitments we wanted to give them a gift that will surely keep on giving. And so, a sweet potato it was. Thanks Shaun, for bringing and inspiring the young athletes – we look forward to seeing more of them in the future! 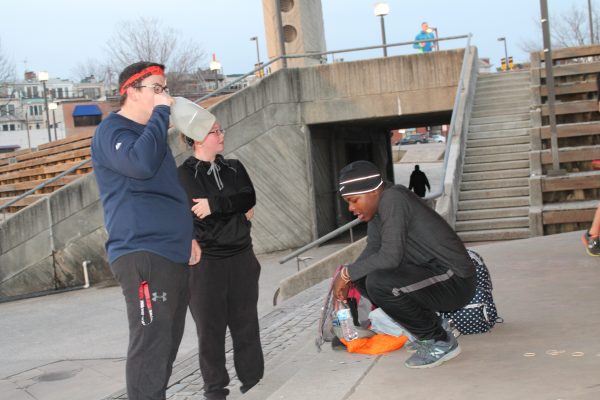 Wen won the positivity award!!! If you don’t know Wen, now is a good time to get over to him and hear what he’s all about. Wen showed up after a few weeks of questioning all aspects of NP through facebook messages. We are 99% sure he hasn’t missed a workout since. He is the one who is silently crushing the workout, showing up to any and all NP events including the gin riot which was the furthest he has ever run AND asked for a bib for the Virginia Beach Half Marathon. He is going to red NP like a champ at that race and we are so happy he finally found us! FOLKS, find Wen, he is usually sporting a very sweet tracksuit that we have all had our eye since he started wearing it!