August 17th is the Bomber game. I don’t have a working link for that, just type in bluebombers.com/novemberproject and use the code NP2018.

Great workout today squad. Megan, Dom and I each had a station, and you all got to spend 15 minutes at each one. You were all pretty sweaty by the time you got back to the field, so I’m guessing it was a gooder. With a workout like that, timings are important. We had to accommodate a quick warmup, 15 minutes at each station, and we allowed for two minutes to switch stations (although I think it took a bit longer). So yes I was being a bit of a hard ass this morning, but it also seemed like a good time to remind everyone to show up on time for the bounce.

The bounce should start at 6:14am. If there is a ton of people still rocking up after 6:14, that pushes the bounce back a bit, which pushes the whole workout back and ultimately takes away from time to do the workout. We need to be done by 7:14 so people can get to work. If you’re showing up at 6:16, all you need to do is set your alarm clock two minutes earlier and you’ll get there for 6:14 (math). So I called everyone out on it this morning, and I decided to lean into the curve and keep the drill sergeant persona going for the workout. (A long time ago, I was in the army reserves for two years). The pushup workout we did this morning, where everyone had to remember everyone’s names in the group or they did pushups, came from one of my army courses; we had to remember which regiment everyone in the platoon was from, and if we didn’t, we did pushups and then restarted. Also, when the sergeants gave out pushups as punishment, they had to do them with you.

During my army training, I also learned that whatever time you go to bed, you can still wake up for the morning PT (workouts). Some days, training would end at 1 or 2am, and I’d wonder if we’d be giving the PT a miss the next day, but sure enough, we’d be up at 4:45am, ready for our 5am workout. So even if you can’t fall asleep the night before a workout and think you should just sleep in, it’s better to just wake up and do the workout; you’ll get a better sleep the next night guaranteed.

So show up on time next week! Get there for 6:10 and then you’ll have a couple minutes for the chitter chatter before we pitter patter. And if not, I’m more than happy to join in with some more pushups 🙂 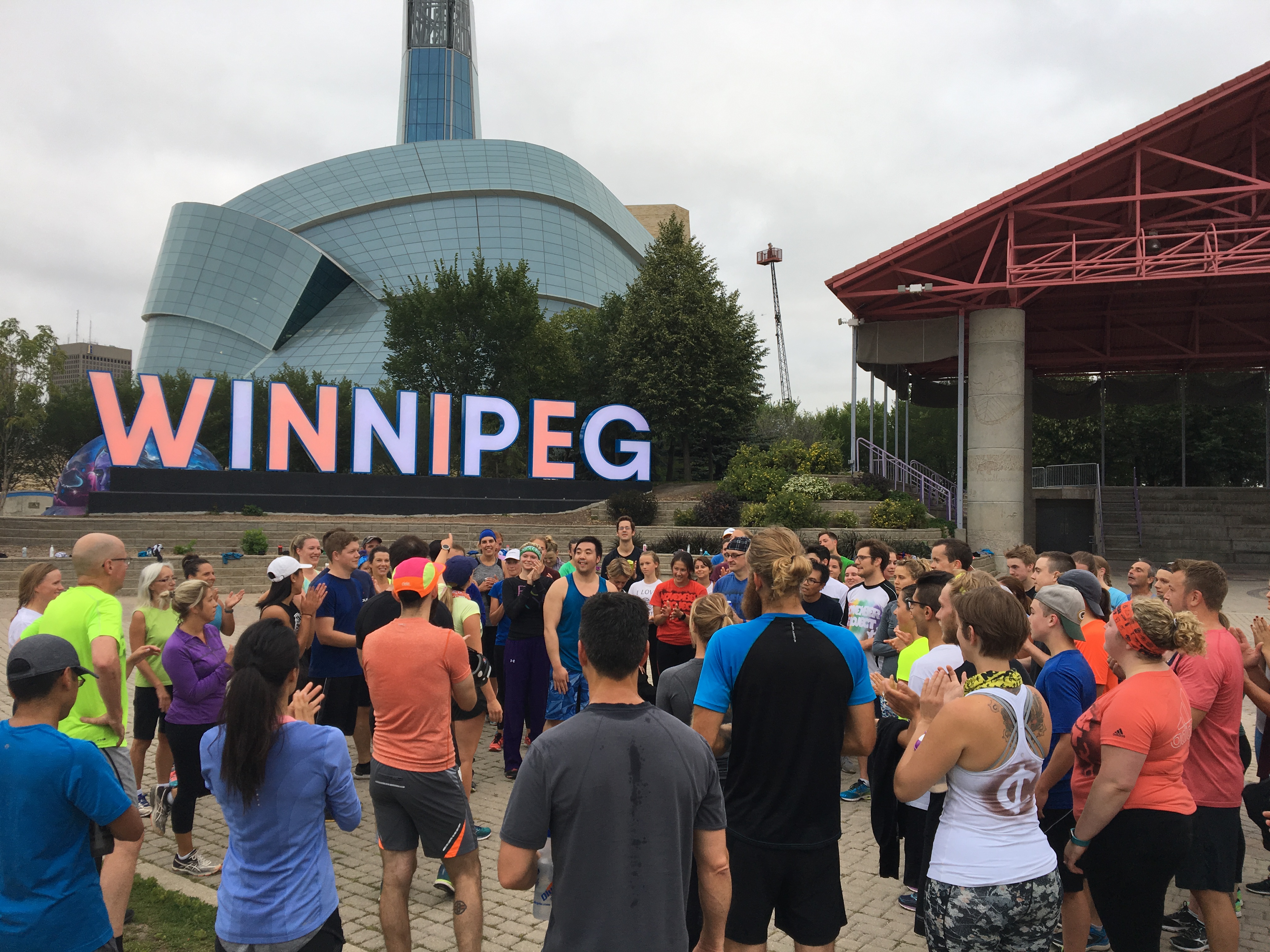 Brad has been showing up to everything (November Project, Winnipeg Run Club, Bridge Forks Running, Monday Run Crew) and he was the much deserving recipient of the Shabooya Award today. We are glad you’re here Brad! And we will see you at the next free workout. 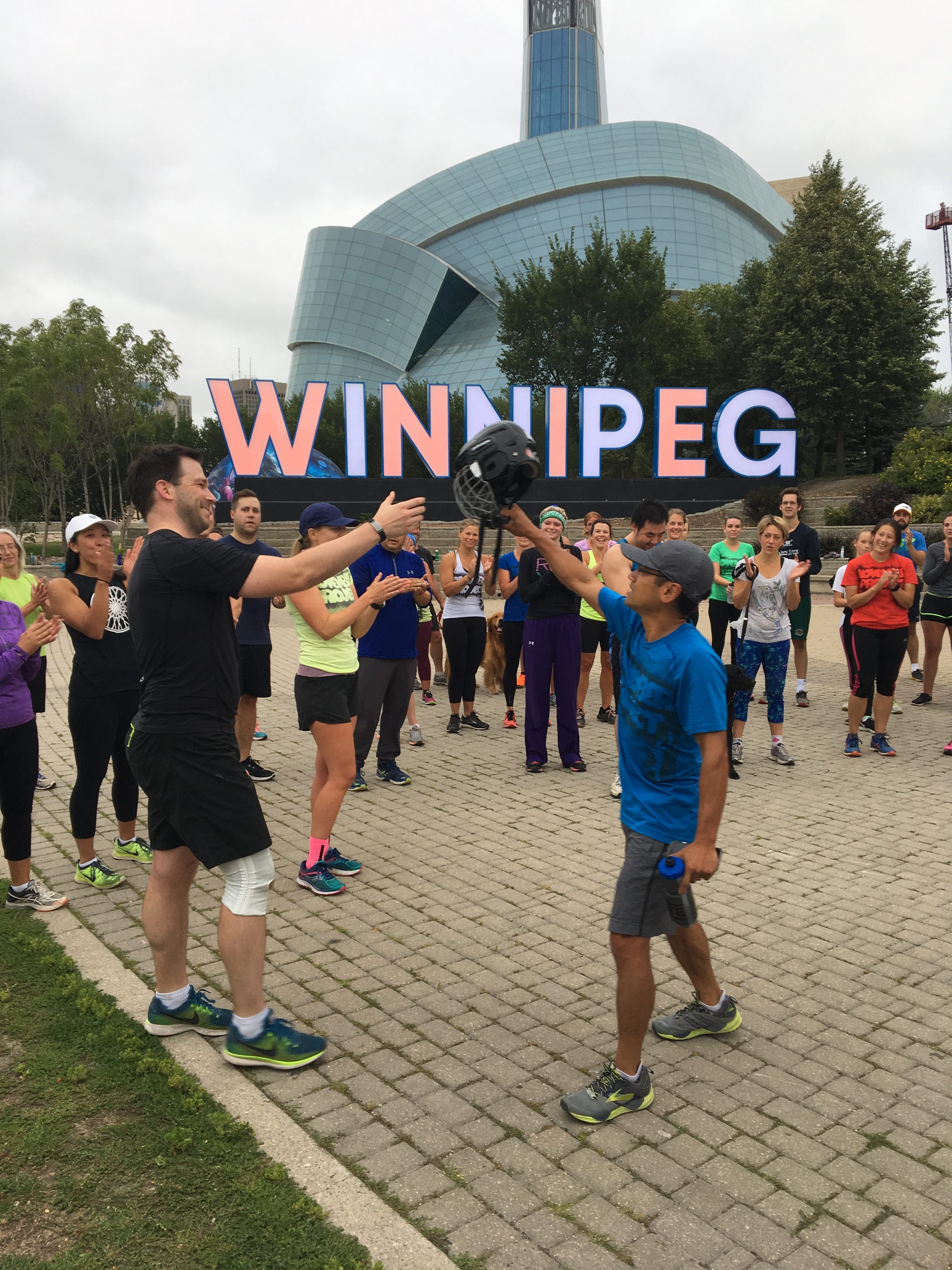 Let’s see if Brad can match Junel’s enthusiasm with the shabooya award over the past two weeks. If you missed it, Junel had it down on the field at the Bomber game on Friday while receiving an award for being a Community Hero. Way to go Junel!

We had a friend come take some photos back in June at one of our workouts. Her instagram is @aliceandflore, and her name is Janelle. So we will be posting some of those pics, and using some for social media posts. It’s nice to have legitimate photos sometimes; our aggressively mediocre photo skills just don’t cut it. If you know any photographers or if you are photographer, we are always happy to have people show up to take some pictures!

Alright, I have to get back to work. See you all Friday! It’s a long weekend coming up, so let’s earn it.