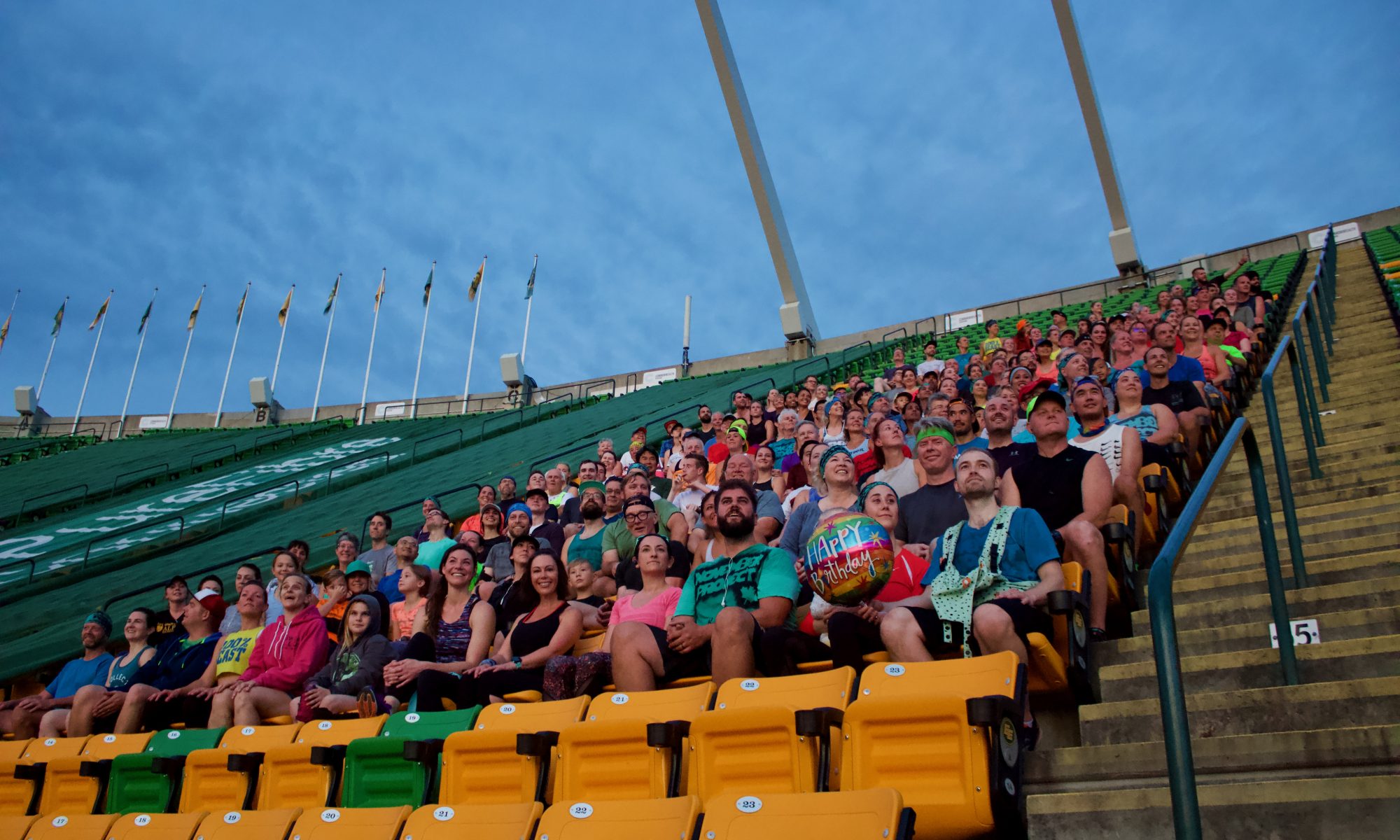 At the end of the workout today, I took a minute to sit and think of how fortunate we are to have such a cool community in Edmonton and beyond. This morning, there were a number of birthdays, including a 7th birthday, and a 1st birthday. It brings a huge smile to my face knowing that on the second day of school, kids are so excited to come up and get their birthday boom. And in case you haven’t realized it, standing in front of 200 people like that is quite intimidating for a 7 year old. When he’s older, he’s either going to be very comfortable with public speaking, or extremely terrified of it. I’d like to think it’s the former. It was also Isaac’s 1st birthday. How cool is it that he gets to grow up around so many amazing and supportive people? Also, for the parents to place such an importance on the community and the people that they prioritize bringing their children out to November Project, it is admirable. We know it’s tough. We know it’s not easy for so many of us to just make it to the workouts and truly, showing up is the hardest part. That’s why the hashtag is #justshowup, because it is the biggest obstacle. The other really cool thing about the community is that it extends beyond Edmonton. If you’ve been fortunate to visit November Project in another city, you have like-minded people all around. This past weekend, I travelled to Ottawa to see a NP wedding. For those that know Seumas, we may have lost him to the NP Ottawa, but it’s pretty cool knowing how powerful this free fitness thing can be in some people’s lives. This weekend really reminded me how special this entire thing is.

And before I leave, I’d like to share the craziest story from my trip to Ottawa. Following the NP wedding workout on Friday, the crew that was visiting from Edmonton decided to go for breakfast. After some debate about what is nearby, we ended up choosing a diner since it was the closest thing for a meal outside of a coffee shop. 3 members of NP Baltimore joined us at this random diner almost 2km from the workout. The diner was nothing special. It was pretty much empty except for us and 3 police officers in the corner. Basically, it was a random spot. Anyway, we’re sitting down and a father and daughter show up in the restaurant. Now, remember, at this point there are 8 people from Edmonton, 3 from Baltimore, and then the 3 police officers in this diner. Well, the two people who walked in, were from Edmonton. Not only were they from Edmonton, they were from NP! In what seems like a crazy twist of fate, their flight to Boston was delayed and had an extended layover in Ottawa and decided to go into town for breakfast. For whatever reason, we all ended up in the same diner. Pure coincidence. My mind was blown. If I wasn’t there, I wouldn’t even believe this story. I spent 5 days on vacation and this is the story I needed to share. This might be my favourite story of the YEAR. I know, that’s a bold statement. Like I said earlier, November Project is special, and it can be so much more than a 30 minute workout 3 mornings a week.