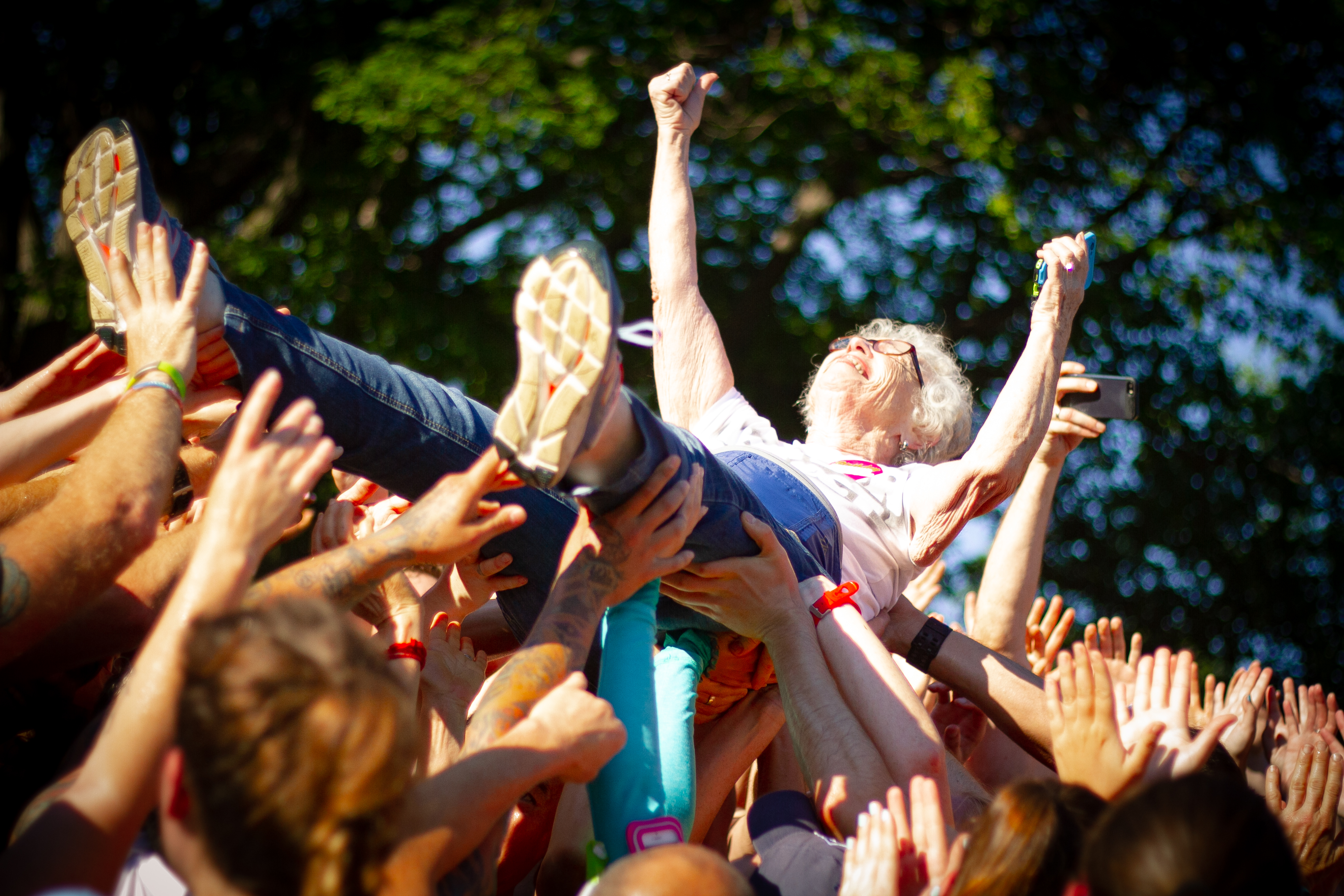 Well kids that’s a wrap.  We finished up the first annual #IndianaJunes – a 5 week, Friday streak of everyone’s favorite Indiana Jones sprints.  You better believe we’re making this an annual tradition and I’m already looking forward to next year!

For me two special things happened today.  Not only did we get to toss this beautiful little lady in the air and crowd surfed her directly into her 80’s, BUT equally as beautiful was that basically everyone ran some form of Indian Jones.  Rewind to before this whole INDIANA JUNES thing and there was always a pretty large crew of people that usually opted out.  Opting out was never really an option, but the idea of speed running in a smaller group can be daunting and scary as fuck, believe me I know.  I’ve been there.  Whether you’re in the slowest group or the fastest group there’s a level of nerves and uncertainty if you’ll actually be able to hang.  In the end what’s the worst that could happen?  You fall back a group, sure?  That can feel terrible in the moment, but I look at it like this — at least you gave it a whirl.  You tried something.  You challenged yourself.  You took a leap of faith and although you didn’t get to where you want, you got further than you would have.

It’s funny to look back on these last 5 weeks and see:

Week 1:  I don’t care how many times EMC2 try to get me to do these, there’s no way I’m running them.

Week 2: They’re really not giving up on this, we’re going for the full month.

Week 5: OHHHH but I just found my grove, but do we have to stop?! (John Vining)

I’ve heard a ton of stories of people FINALLY trying them because it’s like we were force feeding you #broccolibites.

I’ve SEEN people get stronger and faster and more confident and I’m over here like OH shit you’re hanging with THAT crew?! Go get ’em tiger!

I’ve SEEN people connect to people they would never have connected with because they stepped outside their comfort zone.

When you think back to what’s talked about after these sprints, there are no numbers involved.  No one’s said how many hills they got in, or their pace or the mileage.  Numbers are irrelevant, they’re not important with this workout. Everyone’s hyped.  They’re talking more about how they feel.  Feeling like being part of a crew.  The feeling of getting an 8 second spotlight while you whip by your friends who are cheering you on.  The feeling of completing something together as a team.  It’s like feeling of being lifted in the air by a tribe of beautiful humans and defying all expectations of what you, or others, previously believed you could do.

Now to me, that’s just as beautiful as tossing this sweet lady into the air and crowd surfing her to ring in her 80th birthday.  I don’t know about you but when I woke up this morning, I never expected to witness something with so much pure, youthful joy.  THIS to me was a reminder that age is just a number and numbers are irrelevant.  They don’t define us or limit us.  They don’t tell us what we can or should do.  So next time you question trying something new or scary that we throw your way, remember this brave human that defied what all others would have assumed she’d be doing on her 80th birthday and remember that’ll you’re backed by a tribe full of humans cheering you on and lifting you to wherever you want to go.

Damn, I love this tribe.
Capoze

MONDAYS LOCATION IS HERE AT THE BU CHAPEL.