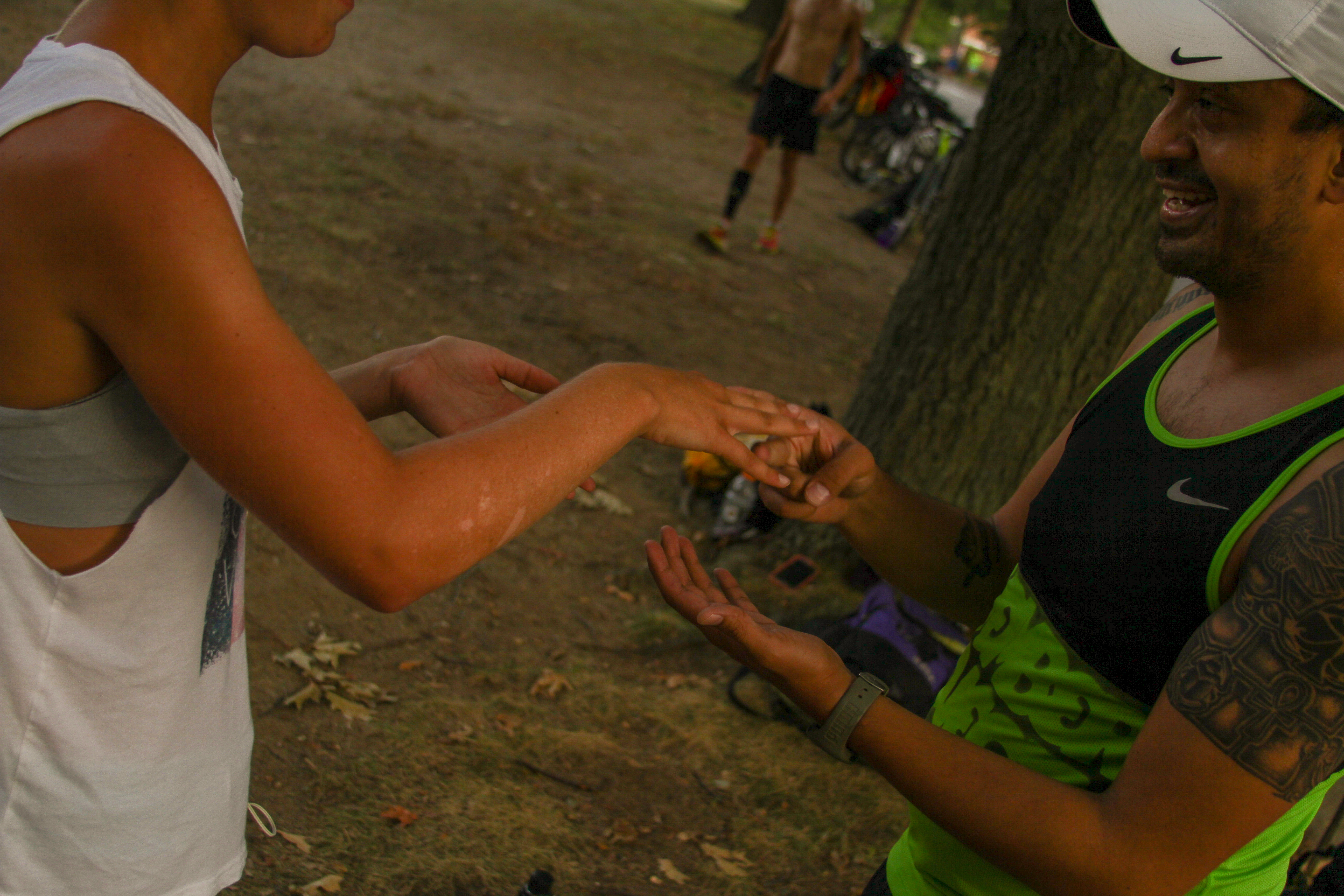 We ROCKED the hills of Brookline this morning.  Seriously.  Showed up there like SCISSORS ready to tear them into cutout PAPER snowflakes…  WHOOOPs! Sorry — wayyyy to soon to start droppin’ winter references in Boston…

Well, Boston, if you’re still with me after that slip-up, rest assured, nothing I say from here on out could come close to being as offensive as that.

So let’s RECAP this morning:

Hundreds of people arrived expecting to run hills this morning and that is exactly what we did. Every Friday morning, the same awesome shit goes down.  Our alarm goes off at early-as-fuck AM and we race to get our clothes on (one of these days we’ll set them the night before…maybe one day), sip some java which helps out with other morning ‘routine’s (it’s a poop joke if you aren’t swinging at what I’m throwing), some of us brush our teeth – most of us do not, we lace up and then head out to wake up the dawning world and run some hills.

For those of you have been coming for weeks, months, years at this point have a pretty good understanding of Summit Ave.  You know how many hills you can get in. How long each lap takes.  Who you can beat and who you shit talk because you can’t quite keep up with them and shit talking is your way of puffing out that chest.  You know, all that good fluffy stuff.  But we left today’s workout up to luck. A good old fashioned, Western draw of Rock, Paper, Scissors, RUN!  Best two out of three.  Losers jogged a killer, walk of shame around the front hill and winners did a victory dance around the backside.

What was awesome about this workout is it shook up our typical hill routine.  When we say front-side, stair spice, Indiana Jones, Hills+cross country, backside, the shocker….. you know what to expect.  With this workout we’re constantly being tricked.  We’re fucking with our mind and shocking our body.  It’s fun.  It’s a unique and cool way switch it up.  How many hills did you get in today? Many of you probably can’t say exactly and that’s the point!  What matter is that we al; got a swift kick in the ass.  Workouts like this are about breaking up the constant routine into intervals and focusing on a smaller goal to crush.  Whatever that goal might be, the lap, the mile, the straight-away you’re facing.  We’re not thinking ahead, psyching ourselves out for what’s next or the 3 front hills we still have left before we’re done.

Speaking of shocking our minds.  We’ve got some work to do to shock the 28 other tribes in cities around the world.  Right now we sit at 1.479 FB likes.  Yes that still makes us the smallest tribe according to Facebook.  Are you cool with that?!  I’m not, fuck that — we’re the #MOTHERSHIP.  Grab your bosses phone from his hand and like the page for him.  Run up and down the middle aisle of the red line and tell everyone about it. AND don’t get off until EVERYONE in you car has pulled out their phone and liked it.  Be creative.

IS this really that big of a deal?  Not really, but YES it is.  This is BOSTON’s way of recruiting and reminding the people in our city what the fuck we are up to and how awesome our community is.  It’s not just for the loyal people that show up every M, W, F – it’s for everyone that has never made it to one of our workouts or have fallen off the bandwagon.  It is about growing our tribe and strengthening this city with the positivity, humor and badass free fitness that we throw down three times a week.

This is our chance to reignite that fire inside each of us for this movement and this city.  So I encourage all of us to think about that as we head off into the weekend!

MONDAY’s LOCATION is here.  You’ve got the next 2.5 days to recruit, plan and show you’re sweaty asses (because WE RUN TO DECKS) up.  Don’t miss it.  I missing Monday and I’m not thrilled about it. Don’t be like me, #justshowup.

If you squint your eyes really hard….yes even harder.. keep going.  Are they closed yet?  Because only then can you probably make out the faded 12,316 in the back of your eyelids.  Well thats our goal friends so keep our [closed] eyes on the prize and keep recruiting the good people of Boston, Massachusetts and the WORLD to follow us.  We’re breaking DC’s following.  No doubt.