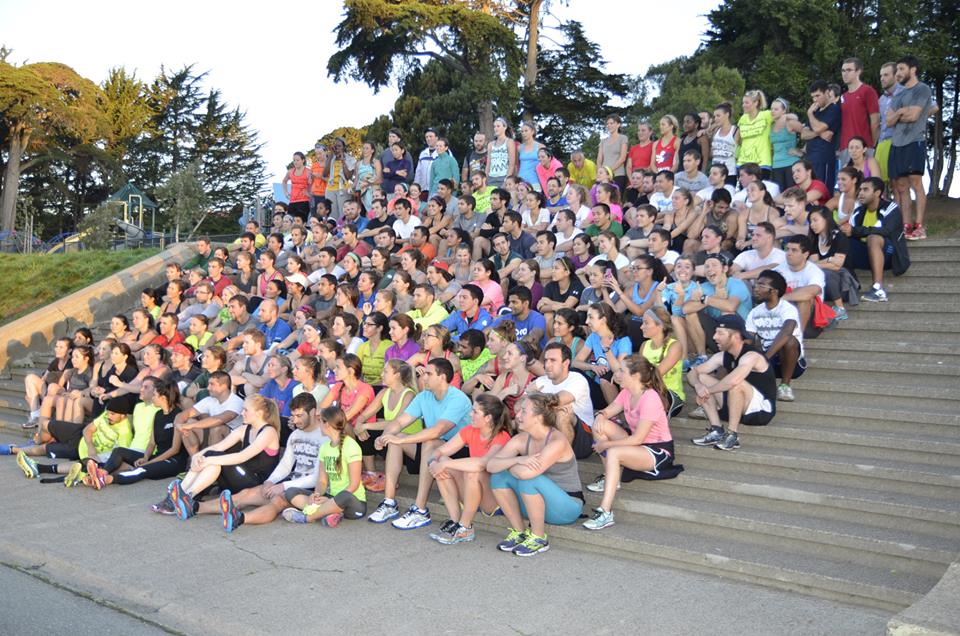 Things got a little tense this morning at 6:35am. The group got columns and rows confused as we attempted to count our record setting day before the workout started. Some people will tell you Dan Clayton got columns and rows confused, but they’re ridiculous liars. With the clock ticking, the sun rising, and a bunch of SF techies getting nervous that they wouldn’t have enough time to take a bath in the sink at work before their 10:30am ping-pong match, we had to move forward with the workout despite not completing an official count.

We knew it would be close…

Good thing the workout was an absolute blast / organizational masterpiece! Four color-coded routes heading in four different directions around the park were all lined out in chalk. 16 workout stations laid around the park had people pushing-up, sitting-up, jumping over each other, hoisting people, throwing legs down, and burpee-ing all over the place. All laps led back to center, where people would find a new partner, or embark on a new solo path around the park. Paddy and I chalked the whole thing out last night and the results were awesome:

Upon completion, I witnessed the longest finisher tunnel I have ever seen. People thought they were done with the workout only to find that they had to squat run through a quarter-mile finisher tunnel that started at the top of a nasty set of stairs and ended at the top of an even nastier hill. It even took a sharp right turn at the top of the hill when the tunnel ran into a tree. So the count was on! Two by two Paddy and I counted along the length of the finisher tunnel, and as we rounded the corner at the top of the hill, it appeared as though we were going to come up just short. We almost cried, and then screamed, and the cried again. Upon revisiting, tallying folks who left early, remembering to count ourselves, and doing a quick count of some of the photos from our failed column / row experiment, we were relieved to find that we DID IN FACT BREAK 200 PEOPLE!!!!

HOLY FUCK you guys, over 200 people! (203, to be inappropriately precise). This is really an incredible feat, and we beat our goal! Paddy and I (and Laura, who will be back next week) want to thank you all from the bottom of our hearts. It’s so incredible to us that you a.) even listen to what we say…because 99% of the time we have no idea what we’re talking about, b.) believe in this thing enough to show-up, and  c.) believe in this thing enough to tell all your friends to show up! We truly are deluded enough to think that November Project can change the world, and with your help, we see it happening little by little every week. Thank you, thank you, thank you! From your friends, new friends, and soon to be friends at November Project San Francisco!

Lastly, but certainly not leastly, the positivity award went to an awesome dude / regular NP-er / global phenomenon / internet creator / Tantek. Tantek has been with us for a long time now, and I’ve seen him improve week after week after week. It’s to the point now where when I see him running towards the finisher tunnel at the end of the workout, I can’t even recognize him. Tantek hits up every single NPSF event, (official and un-official), gives us tons of props on the interwebs, pushes for harder workouts, steeper hills, and longer runs on the WAY to the workouts. He also encourages EVERYONE he meets to get off their butts on the weekends and run with him. This one was long overdue. We <3 you Tantek!

Friday hills are at Divisadero. Meet at Divis and Lombard at 6:25am for more November Project magic and hugs than your body can even tolerate. BE THERE!