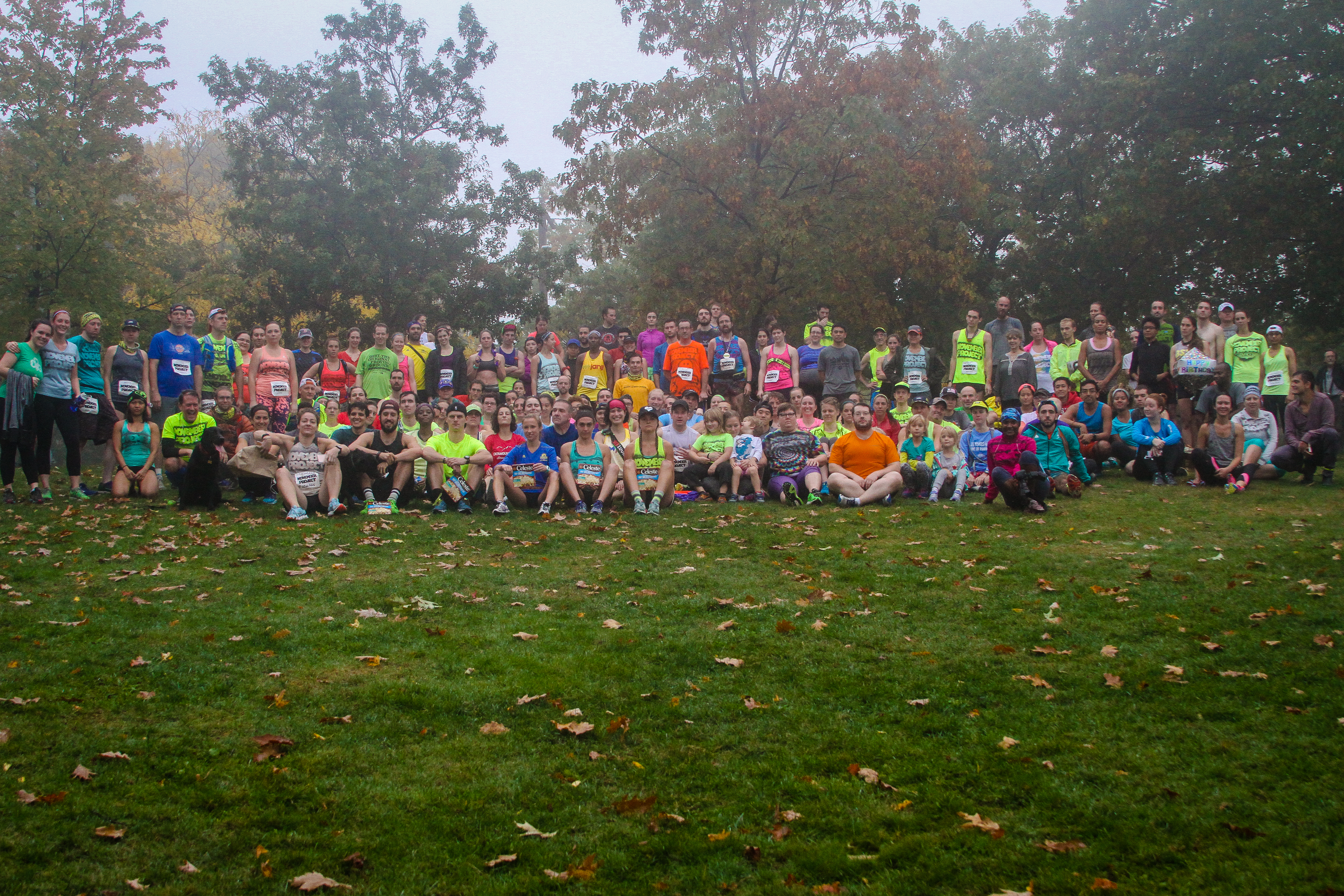 6:30am: The Tribe bounced.  We huddled and chanted the cultiest thing we probably ever have.  And then we ran a killer #hillsforbreakfast workout with burpee spice.  Full hills + 10 burpees in each park at the top of the hill.  Some of the Tri finishers were crushing the hill portion of their race during that workout, while everyone who came for the 6:30 cruised up and down, starting the weekend off with a big fucking bang.  Everyone went home with dirty shirts, happy hearts, and some free fitness in their pockets.  That’s right.  #free.

flashback to 4:30am: Some of the craziest, badass folks showed up like silent ninjas at the top of the misty, dark hill to don freshly printed NOVEMBER PROJECT racing bibs tagged with their names and #WOahMAN in the #grassrootiest sharpie markers around.  The Tribe racers bounced.  It got realllll culty.  And then with toes lined up at the fire hydrant, roughly 100 people set out for Harvard Stadium. Through the streets and alley ways of Brighton, we ran approximately 2.3 miles to the stadium.  As soon as we arrived each person attacked a full tour–37 sections–of the stadium.  Max Bernstein held the most spirited half-way hydration station a triathlon has every had.  “Livin’ on a Prayer” on repeat for a long ass time while he supplied the tribe with water at section 19. Upon completing the full tour we retraced our route back to Summit Ave. (though rumor is some folks got lost on the way back).  At the top of Summit, we did 25 burpees (shirts in the dirt!!) and then ran a full hill, 25 more burpees, and one more full hill to finish at the fire hydrant.  It. Was. Epic.  Even lil’ Liv Klawiter (birthed from Erika Anderson and Eric Klawiter) heard about the race from her mom yesterday and went wide-eyed when she answered her mom’s question, “what do you think about that?”  “EPIC.” was all she could say.

There were winners to this race.  Top three men and WOmen were:

*Top finishers for male and female categories are named THE WOahMEN, until 2.0 is run.  They will need to defend their championships and race again if they want to keep the #WOahMAN belts they earned this morning.

AND put it in the tracker, for long-term PR knowledge.

Woah, listen to this story:

Because no great event or race is truly awesome without the real stories of the people who experience them, here’s a pretty important story for us to share from this morning.  It’s reminiscent of the film Just Showing Up, created by Dooster, supported by The North Face, about the amazing human beings of November Project, not about the project itself.

Here’s the story of Lizzie.  She’s kind of new to NP_BOS but she’s coming consistently.  She approached the co-leaders at the end of the hills workout this morning, right after the group photo.  She seemed a little shy, sort of hesitant, but she asked if she could have the notebook to record her time for the #WOahMAN.  We handed her the notebook and she started to write down her name and time.  As we started to congratulate her on finishing and ask her how it went, she said, “well, I’ve never run more than a 5k…”

Lizzie, you just ran almost a full 5k on the way to the stadium, never mind on the way back to Summit and then up and down the hills two full times!

“And I’ve never completed a full tour in the stadium either.”

Lizzie, you’re saying that you just completed your first full tour, ran farther than you ever have, and you chose to do that at 4:30am on a dark, misty Friday morning…just because NP_BOS was hosting a silly made up triathlon?  You not only stepped out but exploded out of the fitness box you were in and launched yourself into a whole new world of “what you can do!!”

Lizzie was beside herself with pride and surprise, and well…exhaustion.  But she used this community and the weird stuff we do to challenge herself.  She allowed herself to be changed by this little movement.  By seeing what she could accomplish and doing so with a huge smile on her face and a ton of amazing people around her.  Who knows what else Lizzie will do, or try, or accomplish as a result of this morning.  But we’re really glad she’s here.  WOah, are we glad.  CONGRATULATIONS to Lizzie, and all the other #WOahMAN finishers.  And for everyone who didn’t race due to timing, schedule, injury, or just the sheer stupidity of it 😉  stay tuned…WOah man, WOMAN, we just might do it again.

We’re going downtown on Monday.  #JustShowUp at the Boston Public Garden 6:29am.  Precise location here in the tracker.