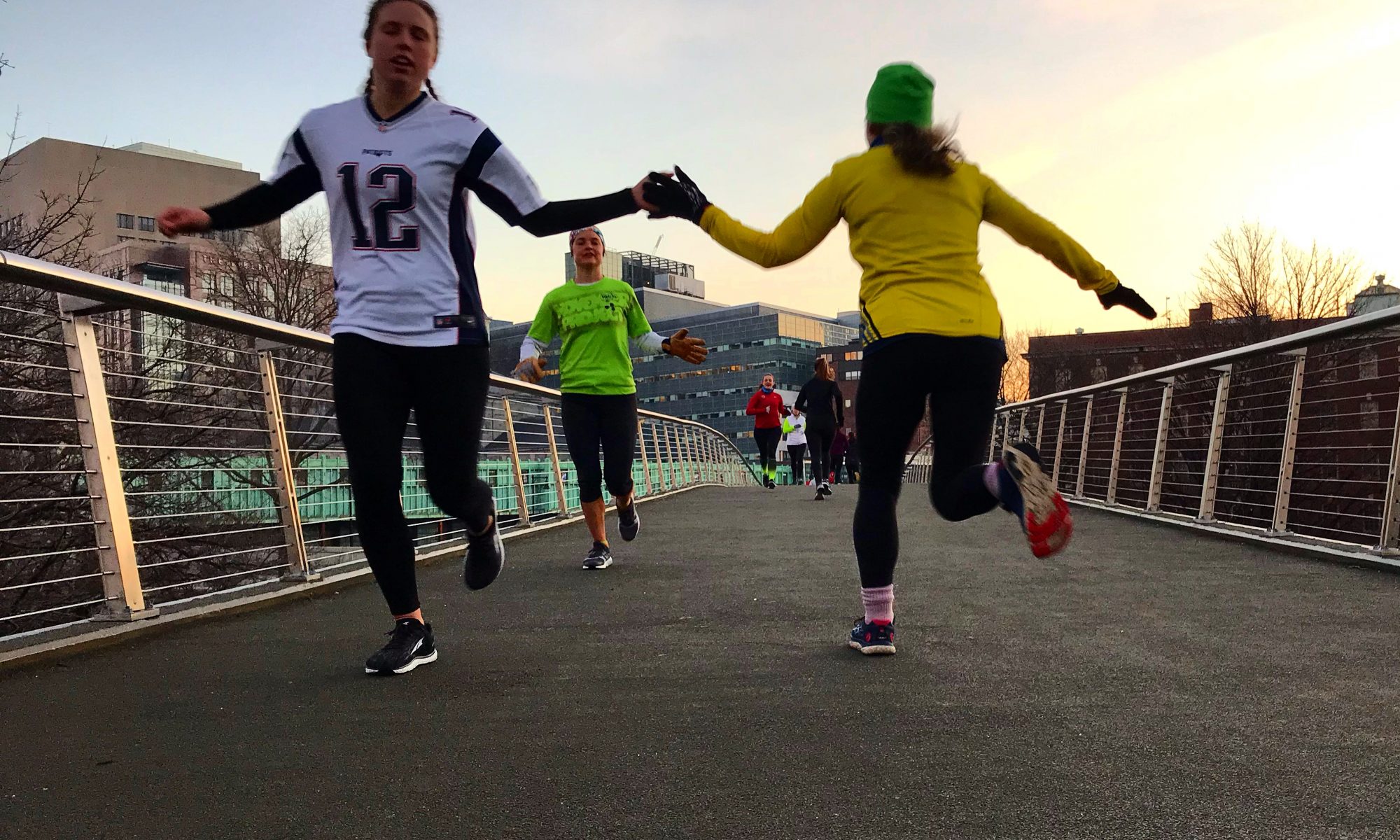 What does the New England Patriots winning the Super Bowl have to do with November Project?

Good question, let me explain. There’s this amazing thing that happens to everyone who’s NOT on the field with those good ol’ Pats when they play. WE feel like we’re playing…like we’re winning…like we’re clasped in the grip of fierce competition against rival teams…like we’re overcoming such intense challenge and obstacles. And it FEELS GOOD to align with, to connect with, to affiliate with a team that is clearly defined–has a sense of identity and culture, and is strong and powerful. As a result, we as individuals, as non-NFL playing people, tend to feel more empowered after a win. We rally together after a loss and reassure ourselves that “WE” will come back stronger next game, or next season. It’s one of the reasons that watching sports is so appealing. We have an opportunity to feel a part of the team, a part of the hype and momentum, a part of the energy, connection, and progress forward.

This isn’t specific to the Patriots, it’s the case with every sports team. This is why people like to jump on the band wagon when a team is doing well–we want to feel all the good energy and not just feel it but be a part of it too. It’s less exciting to affiliate so strongly when teams aren’t doing well, because that’s kind of depressing and sad. But it feels good to “be on the team.”

November Project is far from the NFL. But NP offers something very powerful as a team. This team is one that you sure can watch and feel affiliated with–through social media, by observing from the outside. But NP is also a team that you can actually be on.

I was an athlete in college–a proud rower for 4 years of school–and I’ve often said that I gained just as much of an education from being on my team as I did from my academic education in classrooms. The challenges and successes, the feeling of refusing to give up or back off simply because I knew my teammates weren’t going to, the life-lessons learned through the sport/movement–those were invaluable. And in years following college while I was living in Boston, I missed my team. I missed the feeling of being on a team. That feeling of camaraderie and togetherness, that desire to both support and challenge each other to be better, stronger, and faster. I missed feeling like I was working hard for other people, not just for myself…because if it’s always just for myself, I’d take way more days off, rest a lot more often, and just kinda take it easy when it gets hard, rather than pushing through because “we’re all doing it together!”

NP gave me a team. I distinctly remember climbing stairs one Wednesday a few months after I started showing up regularly. I looked around and realized that this was what I had been missing. I had found my new team. A team to toil with, to succeed with, to sweat and cry and sometimes even bleed with (but hopefully not bleed a lot), to hug and high five, to be better with.

I think the world is hungry for teams–we’re all really looking to feel like we’re a part of one–and often times getting on the bandwagon of Patriot Nation is the easiest way to get it. But November Project offers a team of a different kind. One where just showing up gets you on the roster, where you get playing time every single workout you come to, where you don’t have to be professional or elite you just have to work hard, and where winning is about having fun, enjoying the hard work of fitness for the sake of being healthy & happy, and truly being a part of a community.

So congrats to the Pats–love ’em or hate ’em–they’ve worked hard and came out on top. But more importantly, they might remind us and inspire us to reach out for that thing that we all want and need from our fellow humans, just to feel connected, maybe even like we’re a part of the team. Come get some team at NP, every Monday, Wednesday, Friday, until forever.

THIS MORNING: for Week 1 of February Bridge month, we played on the Frances Appleton Bridge (the new pedestrian bridge over Storrow Drive, right next to the Longfellow Bridge). It was fun, and fitness-y, and not brutally cold. Sprints, stairs, jump squats, pushups, lots and lots of high-fives, rocks-paper-scissors, burpees, skater lunges, more stairs, “I’m the GOAT” jumps (formerly known as “I’m a star” jumps), and a plank/squat hold burnout. If you weren’t there, you definitely missed out on the fun, the views, and the teamwork.

We are continuing our bridge month in Feb and Monday 2/11 at 6:29am will be on the Mass Ave bridge. Meet on the Cambridge side of the river: right here

We’ll be running our re-scheduled #Sunrise6k race in two weeks, on President’s Day. More opportunity to recruit more racers–everyone you know should join us! We will have 5:30am and 6:30am race groups, so no excuses about “I have to get to work…” #JUSTSHOWUP

There will be prizes for male/female place finishers and #MVP of the race.

SEE YOU WEDNESDAY 5:30/6:30am at HARVARD STADIUM for the next NP team practice