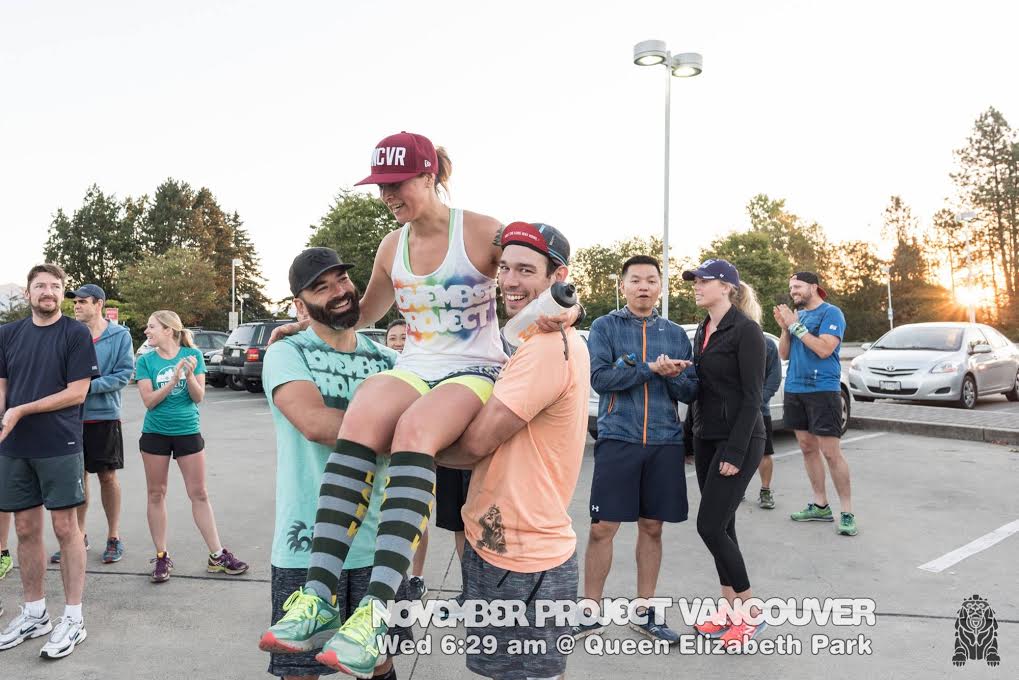 If I could pick one thing that I love about November Project, it’s how much SPIRIT we have!

Last weekend, we had several of our members running an Ultra race in Squamish – one fellow ran 50 miles on the Saturday to which the Sunday runners went up a day early to cheer him on as he ran the gruelling course. He then stuck around for them, a long with a few other NPers at an aid station, to help them fill their packs, give high fives and hugs and encourage them with their respective 50Km race. Richard is always astonished and overwhelmed with joy as to how much the running community supports one another. We are always out there cheering no matter the conditions – 100% #weatherproof. Their accomplishments are amazeballs and we are all proud of them! Way to go!!

Wednesday morning approached … The beginning of a new era, so to speak. A very excited and nervous new leader converses with the tribe and her co leader; wondering and panicking about where the workout is as they were eaten alive by mosquitos and should they change the venue. NOPE. The mosquitos will just make them run faster. (Thankfully, they must have been full by the time we got there because there were none – PHEWF!) The new leader was taken aback by a familiar song coming from the tribe, as two fellows created a seat and carried her into the middle of the pack whilst the tribe sang “Happy First Day” (to the tune of  “Happy Birthday”) She was shocked and overwhelmed all at once. They placed her down and the bounce commenced … An oldie, but a goodie – a song that hadn’t been done yet … “SHOUT!” And talk about LOUD! The energy coming from that group was palpable – she left shaking, but extremely happy. The bounce is here favourite part of the morning – ALL OF THE YELLING! Richard started them off with a warm up run through the park, taking the tribe to the workout destination. There, in the openish field, we did The Summit 4.0 Pop Up workout and OH. MY. GAWD. The WOOOOOOO’s, the FUCK YEAH’s, the chaos, the high fives – the new leader with a huge grin on her face so big that by the end of it all, her face hurt. The Resting Bitch Face she suffers from was definitely not evident this morning. (She will be taking donations for Botox by the way) A comment at the beginning of the workout of “This is going to be the best Wednesday ever” – that really blew her away.  The burnout was a nice, simple Indiana Jones for about 1km including a lovely ‘little’ hill. She felt bad about all the running in the workout, but she got over it pretty quick. Turns out, the tribe really liked it; liked being all together in the same area working out, cheering each other, laughing … It really warmed the new leader’s heart to hear these things.

At the end after our scenic group photo, we gave our awards. The Mountain Sexual Award (exclusive to Vancouver) was given out to a newer member whose partner (a two time MSA winner) said “This guy is KILLING IT” – so naturally we had to celebrate his #gohardidiotgene. As for The Positivity Award, it slept in at Richard’s house, so the new leader improvised with a random stick which aptly became named The Spirit Stick. The Spirit Stick was awarded to the entire tribe not just for all the awesomeness that happened in Squamish, but for how well received the new leader was; the messages from near and far she received, for the hugs, the support, the encouragement, for the love. This community of people we have continues to grow and bring in absolutely wicked people and we are so damn ecstatic about it!