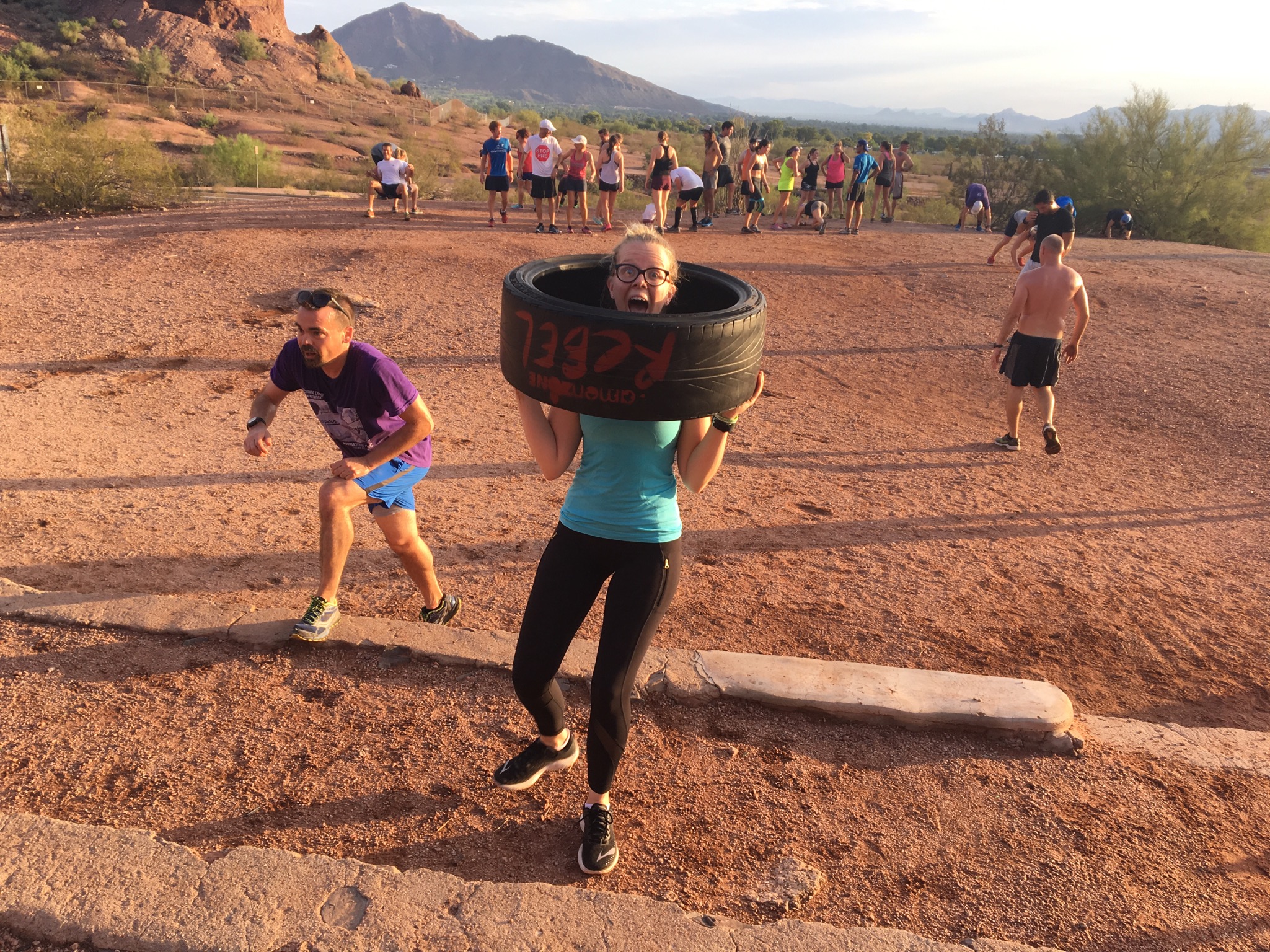 What happened today. Question mark. Exclamation point. I haven’t had that much fun in at least a week.

I arrived at the stairs amped as always, ready to put my head through a butte. And I was met by Lila, who you, Dear Reader, may remember as Lil’ Miss Crushin’ It. She complained that she was cold; it was 80° and cloudy, which is 26° and sunny when converted to Canadian (#PHXproblems, amirite?). This was followed by easily one of my favorite bounces of all time, a rather quaint rendition of, “Mush Pot.” The giggles and whispers of, “Oh my God this guy is so weird…” tell me you were intrigued, to say the least. It continued with the Sisyphean task of carrying not one but two tires up the stairs and back again.

The tribe was electric today. I could feel it in the air (though admittedly that could’ve been the lightning). The workout was simple: playing cards, each corresponding to an exercise. Astute pupils may have noticed that hearts and diamonds corresponded with upper body exercises, while clubs and spades were associated with the lower body. That’s because your heart, which is red, is generally located in your upper body, while your butt is attached to your lower body, and from it you poop. I’m not making this up; it was explained to me once by one of the leaders of the San Diego tribe, so should be taken as gospel. Also I’m pretty sure people are going to go home tonight and practice Burning Leg Mans until they get it right (spoiler: you won’t. Nobody does. That’s the point.).

Lila passed the Crushin’ It award to Inga, of Everything Creative We’ve Ever Done fame. Inga won’t be able to make it next week, as she will be on or around the DC* area. Inga, I want to express my and Jackie’s gratitude for everything you’ve done for the tribe. Thank you for guiding us through making felt cacti, for setting up the cards to Chicago, and for being the enthusiastic camp counselor that tells us we’re doing so well when I know you’re secretly screaming inside at our creative ineptitude.

Today was fun. You all earned your week, and you continue to make Wednesday mornings my favorite part of the week. We will see you Monday, where Jackie will do her best to overcome some MASSIVE jet lag and pretend that she’s actually excited to be up before the sun after traveling half way across the globe.

*Pet peeve: People who call it Washington. I’m from Washington State. I can’t just say, “I’m from Washington” because people ALWAYS follow that with, “DC?” I also can’t say, “Seattle” because I’m actually two hours and a complete different climate from Seattle and then people think I’m a poseur when they find out. So in short, Washington, the District of Columbia, has ruined my ability to tell people where I’m from, and I move to return our Nation’s Capital back to Philly.