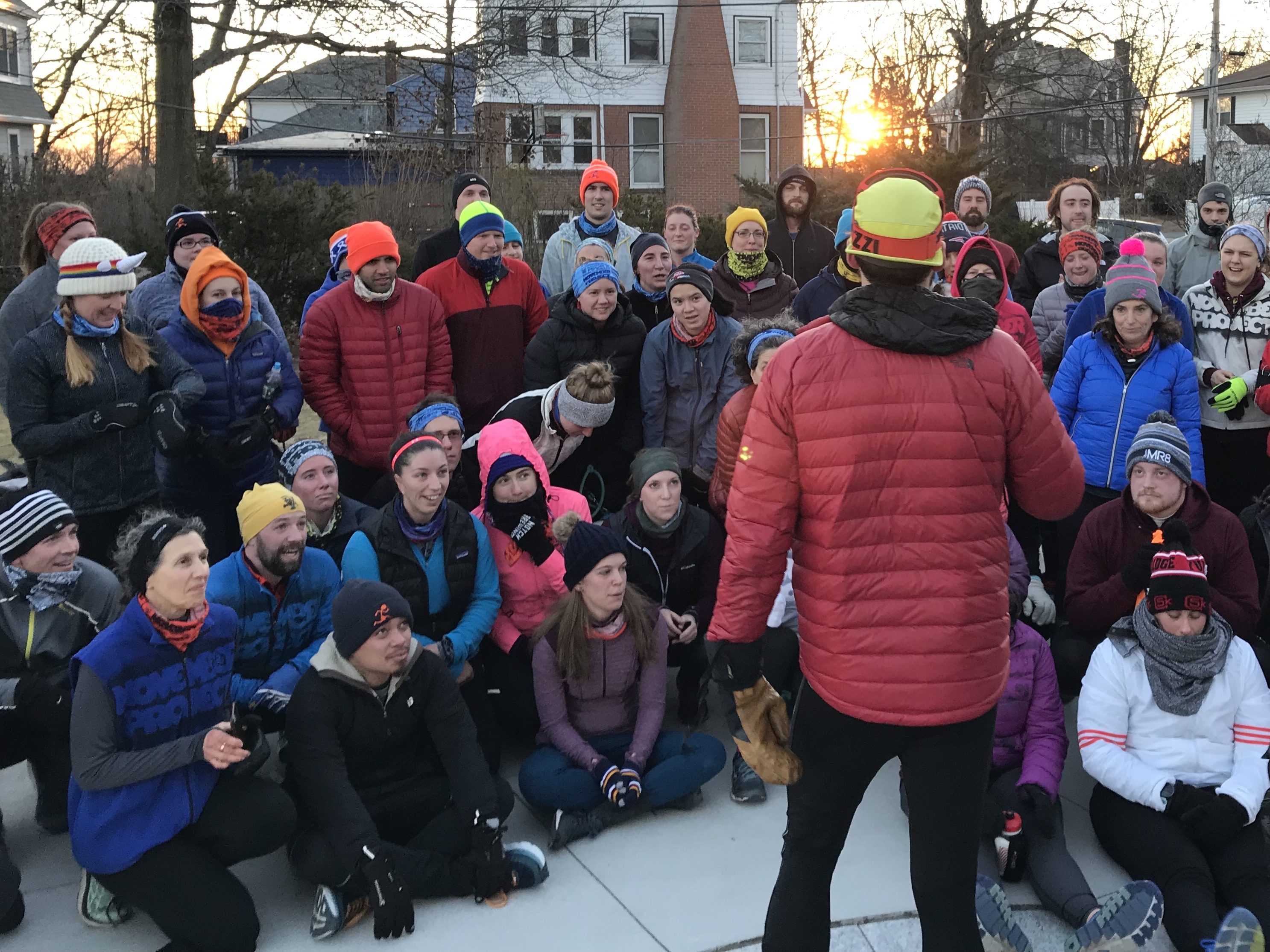 I’ve had a lot of conversations with people the last two weeks about November Project and they keep coming back to this question, “so you do it ALL.  YEAR.  LONG? Even in this weather?”

And in these conversations, I always end up talking about how it can be a lot of fun in those big snow storms, when it’s so hard (good fitness) to run through deep snow, and how we always get to play and have “normal” fun too, by throwing snowballs or sliding around on the ice. And I can even tell stories about epic rainstorms in the spring when we’re in the stadium and we feel like gladiators battling through the downpour. And the stories are amazing. To some, they’re inspiring–like, “wow, you do that, maybe I could be a little more courageous/adventurous/hearty in the bad weather.” A few are even like, “I would love that, I should join you.” But others are more like, “good for you…that shit’s not my jam.”

And maybe it’s because I’ve been out for so many mornings with NP over the years, but I tend to listen carefully to those people who give a good ol’ thumbs up and quickly walk away because the idea of early morning fitness, OUTSIDE, in the winter here in Boston just sounds bad. Like, baaaaaaaaad.

Plus, there are so many different options in the city now, for good, quality indoor fitness. Very different options than were around back in the winter of 2011 when BG and Bojan started the challenge to each other, which became the November Project, which became the worldwide movement that it is now. Now “just show up” could apply to any number of run, spin, bootcamp, yoga, different bootcamp, hip-hop everything, other run studio, the other spin, or the other-other spin classes. Just show up–clock in, click in, sign in and do what the instructor tells you. Get your sweat on. Enjoy it (or don’t!), and head on home or off to work.

I legitimately understand why a lot of people want to, and choose to fitness that way. I don’t blame them or shame them or judge them at all.

I simply reference that option of fitness as a comparison to November Project, which is founded on, and remains grounded in the idea of getting outside. Getting out in the free, open space of our city, and engaging in fitness that is fun, that includes everyone and doesn’t cost us anything–in fact it pays us with bonuses like hugs/high-fives, a tribe of great human beings, adventure in exploring the city, and this special sauce of overcoming all the elements.

Because let’s face it. It’s one thing to get excited about a workout when there’s a fresh fall of new snow and you know we’re gonna throw some around before the end of the workout. But it’s another thing when it’s brutally cold in January and there’s no snow to play in. AND when it’s dark as nighttime until about noon so there isn’t even a sunrise to speak of or snap inspiring photos of. AND when it keeps raining almost every single day and the temperature is only barely above freezing so the risk of becoming a frozen human popsicle is high. AND when it’s already hard to just show up for working out. All those extra challenges make this shit HARD TO DO.

That’s where being #WEATHERPROOF plays a critical role.

You don’t have to choose to be weatherproof–especially if you really truly enjoy the indoor fitness stuff. But one of the things about November Project being weatherproof is this idea of simplicity. The question is not, “AM I going outside to workout?” Instead, the question is, “how much/what kind of gear do I need to wear IN ORDER TO go outside to workout?” This frame of mind removes the internal struggle of “should I/shouldn’t I?” It diminishes the pang of regret when you don’t do that workout, but then realize that you would have loved it because “I’d feel better if I had worked out today/ the weather isn’t actually that bad/ the workout I saw the tribe do looked really fun & awesome/ etc.” And when we embrace being weatherproof, it builds a sense of consistency and confidence –not that we should do it– but that we can do it and we GET TO do it. And the confidence that grows by overcoming all those obstacles, even all of them together (fitness, early, dark, cold, shitty weather…) bleeds into how we feel about other challenges in our lives. We feel a little tougher, a little hardier, and we give fewer fucks about how many obstacles lie in front of us because we know we’ve overcome complex combinations of challenge a million times just by getting up to workout with November Project.

So today’s workout–PR hills on Summit Ave — was not easy to do when the temp is only 23, the windchill is 10 and it was blowing directly in our faces as we ran UPHILL. It was pretty much the epitome of testing our #weatherproofness. And every single human who showed up and tackled everything life & weather had to offer this morning is moving in a different gear today. They have that awesome feeling of “I did the damn workout” reverberation in their bodies. They have that good, knowing vibe of “I don’t regret it.” And they very likely have a little more motivation to keep getting up, getting out of bed, getting into their weatherproof gear, and showing up for more in days to come. Which is what we all really want and need–is to keep moving despite the obstacles, reasons, or excuses that keep us from feeling like and being our best.

I’m challenging all of us to think about what it means to be #weatherproof. It’s often not only about the actual weather conditions outside, but the combo of challenges that the weather just exacerbates, that keep us from moving. But let’s let this so-far snow-less winter give us an opportunity to get hyped for being outside, no matter what. And then when it does snow, we’ll really know how to have some fun.

Say it with me… WHAT ARE WE?

How do we do it? For more education and information about staying alive in the cold from actual weatherproof humans (found up in Canada…duh) the coleaders of NP_Canada (Edmonton) made this dope video and blog to explain. Even if you’ve seen it before, it never gets old. And it can truly help you know how to dress (in layers) for the cold, weathery days.

SEE YOU OUTSIDE. Have a great weekend!

Workout for Monday will be at Madison Park High track, which is right HERE on a map. We will stay warm with some classic monday workout moves, and with some track running. Even if you’ve never run “track” before, show up, and we’ll make it fun! Good prep for Jan 21…

The hype train is about to leave the station, so get excited and tell everyone you know. #SunriseML6K