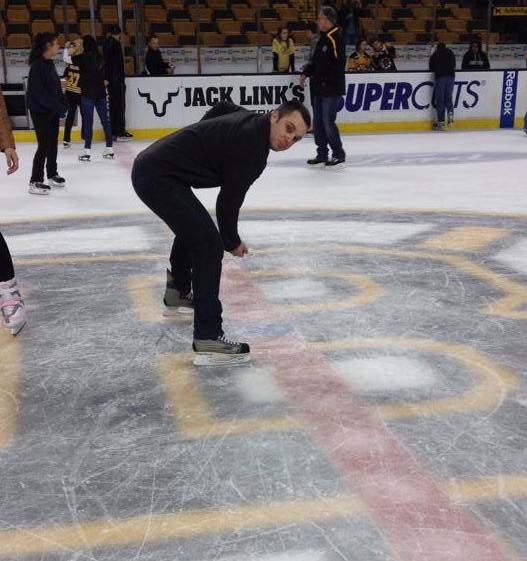 All we know about this dude is that our twitter notifications are littered with people trying to get him to the workout. As far as I’m concerned Richie, you’ll hate November Project and I don’t think you should ever come. People here wakeup early, work out in all weather conditions, hug… All the things that you seem not to be down with so just stay home and enjoy those late night beers. However our girl Jenna for some reason still keeps inviting you. You are also silly enough to give her verbal saying you’ll be at the workout. So my dear friend, I have no choice than blast your ass all over the interwebs, as submitted by Jenna the Verbal Enforcer.

He thinks that just because he’s a Sports Reporter at the Herald that it’s okay to talk a big game.

After months of recruiting from Jon Levitt and myself, we finally got Richie to a Destination Deck about a month ago. After the workout, he said he was hooked and managed to drag me into a Marathon Challenge his gym was hosting (run 26.2 miles the week of the marathon with a team of three). I was pretty sure this was just the beginning of Richie getting his game face on, remembering how much fun working out is, and drinking the November Project kool aid (read: fall in love with NP).

But despite saying he liked NP, he kept giving Jon and me excuses. “It was too cold,” (we’re #weatherproof), “it’s leg day,” (“leg days” are everyday for the tribe), “I have to work,” (we all work) and best of all— “The Bs game is on” (Andrew Ference plays in Oilers games and still gets to NP).

Finally, on Wednesday, Richie dropped a verbal for Friday (as long as the Bs game doesn’t go into double OT which I didn’t buy into/agree to):

Then last night the game did go into double OT and this happened:

Well tribe, Richie did not show up. Apparently #BecauseItsTheCup is a good enough reason to bail on a verbal and leave your friends sadly waiting for you on the top of Summit Ave.

I hope the game (and whatever alcohol you were consuming that you didn’t sweat out this morning) was worth the hearts you broke. Until next time, We Missed You Richie.