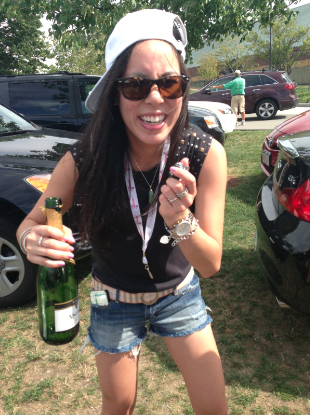 Today’s gunning post comes from Jenna. As you will see, this is not her her first rodeo. Enjoy…

When I lived in Allston over the summer, my friend Emily was a regular NP-er with me. We’d get up (well, I’d drag her out of bed) at 4:50AM and be at Harvard ready to eat some stairs for breakfast by 6:28. Once I moved to Fenway and had to become a gypsy on Tuesday nights, Emily unfortunately couldn’t make NP happen. So when Monday.Edu made its rounds to the Copley/Kenmore/Brookline area, I knew I could get Emily back on board. Although she hated getting up in the mornings, she was so happy after finishing a workout that she felt like this:

On October the 6th, she dropped a verbal for Monday the 14th as she felt “horrible” and knew she wouldn’t be able to get up on the 7th. Fine.

By this point, I had already been stood up by my friend Brianna, and Emily knew what would happen if she dropped that verbal and didn’t show (for anyone who missed it).

However, on the 13th, I told Emily I would transfer her verbal to next Monday, the 21st, as I was sick/coming back from Rochester on an 11PM flight and knew she wouldn’t be heartbroken by this transfer.

Last night we chatted and I got confirmation that she would be there… Especially since she knew what would happen if she didn’t show.

But 6:00AM rolled around and Emily was nowhere to be found.

Now Emily, I know you had a long weekend apple picking and eating apple cider donuts (maybe too many)… Followed by chatting up the bouncer at Lir about your boyfriend’s housewarming party in a few weeks… And I know the Sox won (not sure you know what baseball is though) and you’ve been cramming for some financial test at work (I only enjoy counting down from 37, so that’s as far as my mathematical knowledge goes), but YOU DROPPED A VERBAL.

We missed you this morning, Emily. You missed a quick warmup run, 13 minutes of planking/v-upping/supermanning and the occasional cowbell in which case we had to roll to our rights, roll back to our lefts and do a burpee. Coming this morning probably would have taught you how to correctly do a burpee and remind you that it’s actually called a “burpee” and not a “blurpee” (blame it on the #AsianProblems, like everything else). Even Brianna showed up (we know about her track record) and two of my friends from home. And ya know what? They’re all BU STUDENTS. STUDENTS! You are a real person, with a real job— you should know how to set your alarm and not snooze through it by now (and text in English).

Maybe next time you’ll think twice about dropping a verbal. Or just get your life together. While you’re doing (hopefully) the latter, know that We Missed You This Morning, Emily!