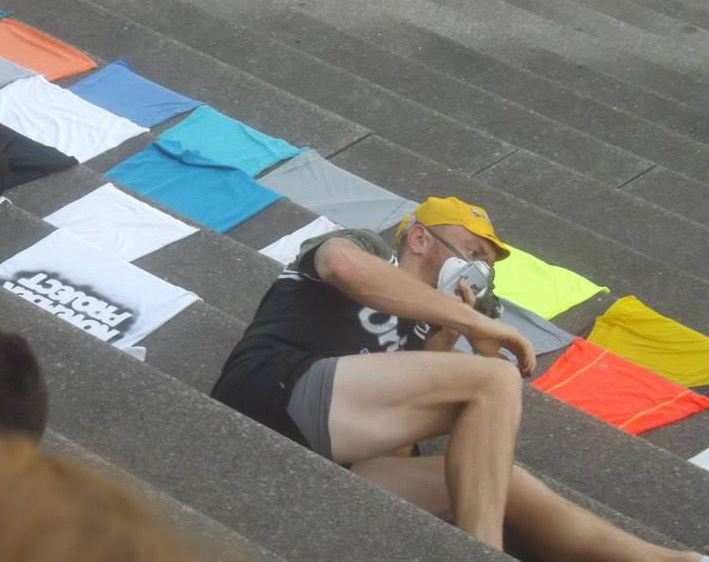 I did NOT see this one coming! BG has been called out via We Missed You Page before, and I honestly thought that was it! The man wont let this happen again. There is no way! Even if his foot is broken, even if he’s not feeling 100% he will gimp, limp, but he will show up! Because he’s fearless, he’s badass, he’s THE MAN! But he is not… He slept in, or slept out, or broke his phone, or bought the new one and is trying to figure out how to use it. Whatever the reason for his no-show is, BG was not at the #DestinationDeck in Seaport. So instead of me blasting him again, I asked the tribe to use the power of social media to write a collective “We Missed You” post.

It all started with:

And it went really well…

@Nov_Project @ArgoBatts We woke up the sun with sprints and planks, hugs, and a tea party. Where were you, our fearless leader? #wemissedyou

@Nov_Project @ArgoBatts how am I supposed to go about my day knowing that our fearless leader broke a #verbal??

@ArgoBatts Ugh, don't you hate waking up early to see a beautiful sunrise with @Nov_Project on Mondays? SAID NOBODY EVER. #WeMissedYou

@Nov_Project @ArgoBatts I used believe in the power of your word. Now confused. Maybe I should go back to the gym? #removingtagsoffcar

@Nov_Project @ArgoBatts You're #weatherproof but not #DistanceProof. Is BK to BOS is too far to drive for a 6:30-ish workout? #WeMissedYou

But then BG took over Twitter handle and tried to redeem himself by making stuff up.

Jenny Farrell – My mental image of Monday mornings in Boston missed you.

Ryan Komaiko – Dear BG, I was excited on Friday to see that the workout was in my backyard of the seaport. Beyond glad to share my neighborhood with the rest of November Project. It saddens me that you consider your warm cozy bed a better alternative than watching the sunrise above the harbor with 200 of your closest friends. I hope the prancing sheep in your dreams were better than the sweet smell of grass permeating from my apartment right now…But honestly, we missed you this morning…

Liane Fernyhough – Dear BG – I, too, know that temptation to stay in bed eating cheetos and indulging in a Gossip Girl marathon. Lick off those orange fingers, say TTYL to your BFFs Blair and Serena and get your ass moving!

Alice Achayo Yen – My bed is warmer and more comfortable than yours and I got out of it this morning for DestinationDeck!…so where were you?!

Sources say that BG accidentally walked by an uncovered mirror with no shirt on and realized that his 12 pack is looking a little more like 11.5 these days. He has been doing crunches ever since. @BrogansAbs were unavailable for comment.

Determined to finally sit atop the podium at a North Face Endurance Challenge this year, sources say BG has decided the best way to train for the last race of the season in California is to run there. He was last spotted heading West over the Rockies with a small backpack full or Essentia Water, Chia Bars, and Anna’s Burritos.

Oscar Enrique Corripio – when I heard #destinationdeck was close to work, Evan and I were excited. So much I even verballed to my CEO to open up despite having worked 8+ hours during the weekend. Was running with a mask in Times Square enough #freefitness? Or did you indeed get detained? Did you not run faster than the train back home this time? Whatever it was, certainly, #wemissedyou

Jennifer MacCallum O’Meara – Brogan Graham You’re #weatherproof but not #DistanceProof. Is BK to BOS is too far to drive for a 6:30-ish workout? #WeMissedYou

Laura Piscopo MacBurnie – “Fuck Yeah” just wasn’t the same. I wasn’t able to do as many burpees as a result.

Jordanna L-c – Micah and Grace are so sad that you missed the workout… Even though they weren’t there either. Better show on Friday. Or they will cry!!!

Lauren Bateman – BG heard that Chris Gray was coming today and was too intimidated to show up.

Sandra Gittlen – BG, had I gone, I would have missed you, but I didn’t go so I saved myself the horrific disappointment of your non-appearance. Do this on a Wednesday and your codename will be #frogmannone

Dana Panepinto – BG, Just as a point of reference as to where I am coming from…I was in Austin, Texas at a bachelor party all weekend following the NP motto of race EVERYTHING! I got home last night with a serious case of PADS (post alcohol depression syndrome). BUT, I got up at 4:20am to make the 70 mile commute to workout with you. As a newlywed…There is only one acceptable excuse I will accept?

Scott Champagne – Rumor has it that he was sporting tight white pants and prancercising in Boston Common.

Elin Flashman – Dear BG, Your second broken #verbal has left me lost and confused. I used to believe all was right with the world, now I am confused. If a verbal doesn’t mean anything to a founder, then is the end of NP in sight? Should I not hug people anymore? Should I move out of Boston? I sure hope not, but until you regain our confidence, my car might be sporting a new tag.

Gabriel Wolf – BG, I made my boss run sprints this morning. What did you do?

Jess Lanzoni – I used to wake up every morning and ask “What would Brogan do” (#WWBD) but now…. it just doesn’t feel right… #wemissedyou

Nick Stamas – Hey BG – I remember my friend’s mother’s neighbor’s first communion. It is a tiring Sunday, you needed your sleep.

Ron Fraser – We missed BG in Southie this morning. Keep calm and Bojan on!!!

Tommy Layman – Everybody calm down. Sources tell me that there was an important meeting between BG and Mayor Marty Walsh…wait..hold on. New information has just been received. That meeting was scheduled for 6:29 at the DestinationDeck this morning. We missed you both Marty and BG.

Malcolm F. Purinton – Temperatures are dropping like #verbals, BG! With a hardy happy crew of #weatherproof huggers we welcomed the sun this morning, but something special was missing, you. #wemissedyou

Cyndi Dawkins Casey – Brogan Graham I have to tell you being married is the best! However u have to wear the pants /mandex/shorts/capris and go to work….. don’t get too comfortable….. join a November project workout to keep it SPICY

John Honerkamp – BG, “My yellow painter’s hat was at the dry-cleaners”

Adam Amundson – I heard BG was waiting in line for a limited edition throw back Penny Hardaway jersey size Smedium. Oh wait, that’s not “a thing”, then where was BG?

P.S. I can’t believe this day came and I missed it. The stuff dreams are made of on Social Media.

Jesse Ledin – I know hanging with Paul Leak in NYC can be exhausting and it will make you want to take a few days to recover but you need to get your priorities straight. Clearly Deniz Karadeniz’s commitment to the tribe is legit, he had no problem getting back from NYC well rested and continued to bring the energy to this morning’s NP workout – BG – WeMissedYou!!

Eric Klawiter – This just in: BG was found wandering aimlessly around Boston taking a moving selfie and only speaking in hashtag.

Emily Saul – Some people hear voices in their heads that make them do things they shouldn’t do. BG is a special man, and he doesn’t have voices in his head, but he does have a very vocal set of abs, and today they displayed their strength and influence by convincing BG to stay in bed. Maybe the abs need a new outlet besides Twitter? Maybe we need to do a psychological evaluation for “abdominal schizophrenia?” We definitely missed your abs today Brogan …and the rest of you too.

These are all amazing, but the overwhelming crowd favorite came from the man himself:

I didn't feel like running this morning so I did a gnarly @shakeweight workout. #FeelTheBurn @Nov_Project pic.twitter.com/gjZGR1VflS

People have said it, you were missed (still don’t know why, but you were), so if you pull this shit again, November Project Board Of Trustees will be taking your executive bathroom privileges.