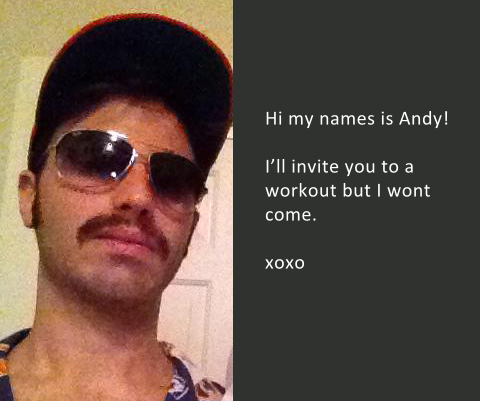 Andy Marx is a popular dude that is involved in something that people call TMIRCE. I’m sill trying to figure out what all those letters stand for but in order to keep this post under 500 words, we’ll leave the code deciphering to Indiana Jones.

One thing that I do know is that Andy Marx is very involved in the running community so naturally I’ve been trying to recruit him to November Project for a while. For a solid year he’s been skillfully dodging my advances always finding some unbeatable excuse to make his first appearance. So I stopped trying. I pulled the Jedi-mind-trick-reverse-psychology where instead of pestering him I would completely ignore him hoping that one day he would come. And then on Thursday night the slew of text messages and Facebook posts start poring in. And guess who was the recruiting ring leader? Andy F’n Marx from TMIRCE!

My mind was blown. I couldn’t wait for the morning to come soon enough.

As the sun was coming out, I was looking for that signature Macklemore-style haircut cruising up and down the hills. But it was nowhere to be found. When I got home I took it to the interwebs to track Andy down, and the interwebs revealed what I was fearing all along… Andy Marx from TMIRCE B’d a V! And before all you dirty-minded sickos start imagining what B’ding a V means, I’ll clear it up right a way. Andy Broke a Verbal.

Andy, you can’t go on a recruiting spree calling out half of New England to come out and play and then bail 6 hours before the meeting time. I commend your commitment to helping “buddy in need” but I’m your buddy too. I don’t know how things work at TMIRCE but here at NP, our verbals are as strong as our tribe. And since out tribe is really fucking strong, we always chose keeping the verbal over extra 45 minutes of sleep. Hope you’ll come one day and find that out first hand. Until then, We Miss You Andy!

3 Replies to “We Missed You This Morning, Andy”