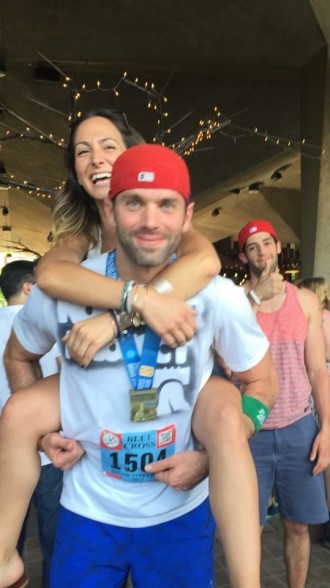 This edition of We Missed You is brought to us by John Combs aka Speedy Jonzales, the man who after getting off a thru hike of the Appalachian Trail missed almost 0 workouts.  Take it away John…

Jokingly, I questioned “I’ll see you in the morning, right?” and without hesitation, Matthew Scioli aka Python Arms said “yeah dude!” It was asked as a joke because it’s quite a hike for Scioli to get to morning workouts, although he used to be a regular, his attendance has since fallen off… hence my surprise when he announced his plans to be there.

I was biking around town for a few meetings and decided to swing by Philadelphia Runner to say hola to some buddies and maybe, just maybe get a dozen soft pretzels on Sansom St. Anyway, I locked my bike up out front, strolled into the store, popped the question, and did some chitchatting for a bit before leaving for a meeting down the street. I came back to get my bike an hour later and poked my head back in the store just to reconfirm his verbal and also get Breandan’s as well (although a little tardy, B did show up).

Some will say recruitment levels of new NPer’s has been a bit low, and I hate put the blame all on one person, but I’m going to have to say it falls on Matthew’s massive shoulders. What does one do when the poster child of your tribe starts choosing sleep over showing off his physical prowess at Lemon Hill?

We go to NP to push ourselves- Not only to become stronger and faster, but also to meet new friends, and drag old ones out of bed to join in. That is why we missed you Matthew. We need you there and your chiseled-from-stone frame to show the n00bs how its done. You’ve been around from the start of this tribe and we want you back. Not just for the show but because you inspire everyone around you to get your ass out of bed at get a good workout in. This morning, we missed you buddy.

P.S. For anyone questioning my sexuality… It’s called a bromance.